Lesbians Who Tech & Allies gears up for October SF conference 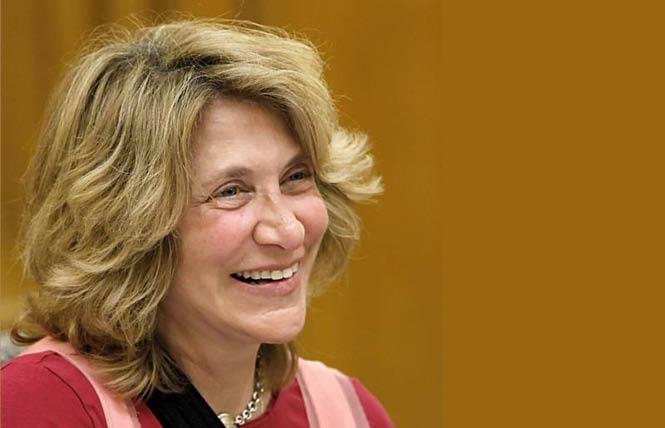 Audrey Joseph is producing this year's in-person Lesbians Who Tech & Allies conference that is slated for the Castro neighborhood in October. Photo: Courtesy Audrey Joseph

The last time Lesbians Who Tech & Allies held an in-person conference in San Francisco's LGBTQ Castro neighborhood back in 2019 life was, arguably, a little easier to navigate. Organizers didn't have to worry about the danger of COVID-19, which made packing attendees into event spaces a veritable non-issue.

Oh, how times have changed.

Lesbians Who Tech & Allies was founded in 2012 as an organization for queer women and their allies in the male-dominated tech field. The organization claims to be the largest queer tech organization in the world with 50,000 members in 42 cities around the globe.

This year, the planned October 12-15 event, which has drawn upward of 6,000 people over its three-day span in the past, suddenly finds itself having to figure out how to safely contain and entertain at least 2,000 people without exposing anyone to the threat of COVID. To do so, organizers are planning on spreading the event out in tents in parking spaces around the block of Castro Street between Market and 18th streets in addition to its location at the Castro Theatre.

Audrey Joseph, Lesbians Who Tech & Allies' event producer and a lesbian with a storied history in San Francisco event production going back three decades, attended the March 3 virtual monthly meeting of the Castro Merchants Association to present her plan to its members. That plan, which is still in its formative stages, raised a few concerns. None more so than that perennial source of anxiety in space-crunched San Francisco — parking. The prospect of bringing a couple of thousand people into a neighborhood over three days with even less parking than it had three years ago caught everyone's attention, particularly when many of the event's tents will be placed in otherwise heavily used parking spaces.

Castro merchants are still smarting after what many now regard as the infamous U.S. premiere of the film "The Matrix: Resurrections" at the Castro Theatre last December. That event gobbled up key parking spaces just as the final days of the Christmas shopping rush were in full swing. After the dreary sales of the previous two years due to the pandemic, they had been frustrated by yet another impediment to drawing in customers.

Joseph, who has produced numerous LGBTQ events in San Francisco, including work with Folsom Street, producing the San Francisco Pride main stage for years, and serving on the San Francisco Entertainment Commission, laid out her plan for reserving parking on the street and in the parking lots behind the Castro Theatre and Walgreens, with its entries at 18th and Collingwood streets. She identified areas where unloading and reloading the trucks for setting up and tearing down the event would take place, as well as described the plans for a closure of 18th street at the Castro intersection.

In addition, "We are considering 17th Street to Hartford," Joseph told merchants, citing the need for more space. In fact, Lesbians Who Tech & Allies is scrambling for space throughout the LGBTQ district. Joseph said they were also searching for a place to set up their headquarters for the event. The last place they used in 2019, the then-empty Wild Card shop at 3989 17th Street, is now home to Eureka Sky, a cannabis dispensary.

Other concerns
Besides parking concerns in general, it was the matter of unloading the trucks that caught the attention of Terry Asten Bennett, a straight ally and the manager of Cliff's Variety store. A yellow zone in front of her store is where her deliveries are unloaded, and she was very concerned about losing that critical space. Joseph assured her the conference organizers would be able to accommodate her concerns and noted they had done so in the past, as well.

Later, in a phone conversation with the Bay Area Reporter, Bennett said she had faith in Joseph's ability to make sure it wouldn't be a problem to her business. They've always been "super responsive" to her concerns, she said. "I've always found them to be 100% responsive."

The idea of closing down 18th Street frustrates him, particularly after what he described as the "mistake" of closing down the street over the weekends last year for Shared Spaces in an effort to draw more foot traffic into the Castro during the pandemic.

"When they closed the street for the last weekend of the month, it was a disaster," said Batt in a phone interview with the B.A.R. Many of his customers drive in from out of town, he said, and they're far less inclined to come if they can't find a place to park.

Joseph is confident there are alternatives that will help the merchants of Castro. In the meeting, various ways around the parking issue were discussed, including valet parking, renting parking garages, and possibly even tapping the parking available at McKinley Elementary School over the weekend when its parking lot might be open.

Despite those possibilities and his own admiration for the event's success over the years, Batt thinks it's that very achievement has made it too large for the neighborhood. The event "has grown and grown and grown," he said.

Leanne Pittsford, the founder of the now decade-old Lesbians Who Tech & Allies, rejects the idea that the conference should be moved. The Castro, she insisted in a phone interview with the B.A.R., is exactly where the event should be.

Pittsford, a lesbian, said she considers the Castro her home (although marriage, as it often does, has taken her away from San Francisco to Washington, D.C. where her wife works in politics). She spent many years in San Francisco, not only as a resident but as an activist.

The Castro, she said, "is the queer epicenter of the country, of the world. Why would it be anywhere else if we can make it work?"

Besides, Pittsford added, the Folsom and Castro street fairs bring in hundreds of thousands of people, far more than the tech conference, even over an extended three-day period. This conference helps women reclaim their space in what is a culturally vital site for LGBTQ people.

Of course, the greater challenge might be the impact of the arrival of 2,000 conference goers, plus support staff, on the Castro's coffee shops.

"We had to figure out our coffee situation," said Cliff's Variety's Bennett, commenting on the rush on coffee shops during the last conference. "You don't want to deal with uncaffeinated retail workers."

Castro's 18th Street to remain open to traffic — for now
Sign up!