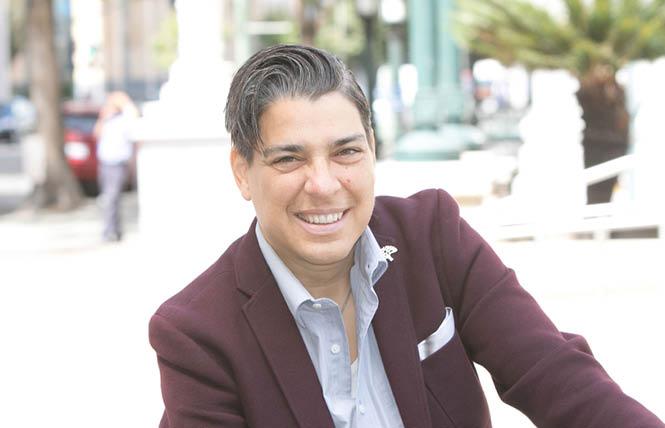 Oakland City Councilmember Rebecca Kaplan, the body's lone out member, formally kicked off March 3 her campaign for the District 3 seat on the Alameda County Board of Supervisors, telling virtual attendees that she will be "a fighter for equity for our county."

Kaplan, a lesbian and current vice mayor for the city, has represented the at-large seat on the council since being elected in 2008. After former supervisor Wilma Chan was killed by a motorist while walking her dog in Alameda last November, speculation began as to who would run for the seat in June. Chan's former aide, Dave Brown, was appointed by the board to serve out the remaining 14 months of Chan's term through January 2022. He said he would not run for the seat.

According to the Alameda County Registrar of Voters, other candidates in the race are David Kakishiba, a former Oakland school board member, and Lena Tam, a former Alameda city councilmember. The filing deadline is March 11. The supervisorial district includes the cities of Alameda, San Leandro, a portion of Oakland, and the unincorporated communities of San Lorenzo, Hayward Acres, and a portion of Ashland.

Kaplan was upbeat on the Zoom call, telling supporters she is ready to work on regional solutions on homelessness, health care, and climate change. The Board of Supervisors oversees the county's health care system and provides major funding for homeless services, she pointed out.

"We need rapid-build affordable housing and to make sure the funding is there," Kaplan said. The board also appoints members to regional bodies, something Kaplan has experience with as a member of the Alameda County Transportation Commission and the Oakland-Alameda Coliseum Authority Board.

"Public facilities are there for us. The county oversees public health and the hospital system. It provides vaccinations and testing not just for COVID but other diseases," she said, encouraging people to keep wearing "quality masks" like N-95s and KN-95s when indoors.

Michael Colbruno, a gay man who is an Oakland Port commissioner, said that he started his career working for the San Francisco Board of Supervisors and the mayor's office there. "I've seen good supervisors and bad supervisors," he said. "She's the only person fully qualified to fill the seat of Wilma Chan, who is and was an icon. The work the board does on health care, transportation, and homelessness — these are issues Rebecca understands."

In a phone interview March 4, Kaplan talked about the importance of serving on the Board of Supervisors, which oversees a nearly $8 billion county budget, though not all of the money is "flexible," as Kaplan put it, meaning it must be spent on specific items as opposed to being part of the general fund.

"Particularly with how funds for the homeless flow from the state to the county, we're not seeing sufficient coordination because a lot of money goes through the county to cities," she said.

Kaplan noted that in Oakland, she and the City Council have had some success using hotels and dorms to house the homeless. "But the county has a lot of land not being used," she explained.

Sheng Thao, who used to be an aide for Kaplan and is now on the Oakland City Council, praised her former boss during the kickoff.

"Her ability is to be so thoughtful on every single issue that comes before her," said Thao, who last year announced she's running to replace termed out Oakland Mayor Libby Schaaf in November. "She is one of the smartest people I know."

Thao said that Kaplan would be effective in helping small businesses as they recover from the COVID pandemic and housing, to name just two issues.

"She's a problem solver and will hit the ground running and she cares — she lives and breathes this work," Thao added.

Bobbi Lopez, a lesbian who also used to work for Kaplan, emceed the kickoff. She pointed out Kaplan is effective when it comes to finding resources.

"Having worked with Rebecca Kaplan on the [city] budget, she knows where every pool of money is in the budget," Lopez said. "She'll do that for the county."

"Rebecca called me about a month ago and asked if I'd endorse her. There was no hesitation," he said, adding that Kaplan would not only represent her district but also advocate for the entire county, as well as for the Bay Area regionally.

Oakland City Council President Nikki Fortunato Bas said that Kaplan served as a mentor to her after she was elected.

"I rely on you as a mentor and thought partner," said Bas, who is seeking reelection to her District 2 council seat this year. "It shows your commitment to building leadership."

Kaplan said that she has proven experience for the job.

"My history of being able to find resources when needed" will be important to the county, she said, pointing out she found $10 million in the Oakland budget to help keep firehouses open after some were threatened with closure.

If no candidate gets more than 50% of the vote in the June 7 primary then the top two vote-getters will face each other in a November runoff. During the kickoff event several speakers said the campaign's goal is to win outright in June, something Kaplan reiterated in the interview.

Kaplan thanked her wife at the end of the kickoff. She told the B.A.R. that she and Kirthi Nath, a queer woman of color and social justice filmmaker who runs Brown Girls Doc Mafia, tied the knot last April during a Zoom ceremony. Kaplan and Nath live near Jack London Square.

The Alameda County Board of Supervisors has not had an out LGBTQ person on it. Gay former Hayward city councilmember Kevin Dowling ran for the District 2 seat in 2010 but lost to Nadia Lockyer, who resigned in 2012 while undergoing treatment for chemical dependency.

"I would be the first-ever openly LGBTQ supervisor," Kaplan told the B.A.R., adding that it was "kind of astounding" that the Alameda board has not had an out member. "San Francisco first had one in 1978," she noted, referring to slain gay supervisor Harvey Milk, who was also the first gay person elected to office in California.

Updated, 3/4/22: This article has been updated with comments Rebecca Kaplan made during an interview with the Bay Area Reporter.