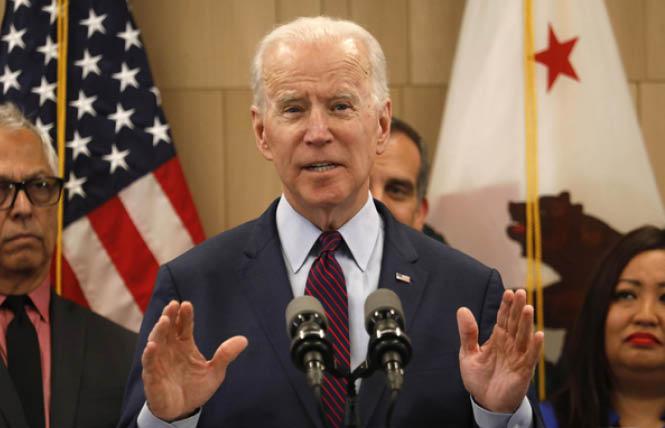 Amid consternation over an order from the Texas governor designating transition-related care for transgender youth as child abuse, President Joe Biden and Secretary of Health and Human Services Xavier Becerra issued a pair of statements Wednesday night condemning the move.

Biden in the March 2 statement issued by the White House called the order from Texas Governor Greg Abbott (R) "a cynical and dangerous campaign targeting transgender children and their parents."

"This is government overreach at its worst. Like so many anti-transgender attacks proliferating in states across the country, the governor's actions callously threaten to harm children and their families just to score political points," Biden stated. "These actions are terrifying many families in Texas and beyond. And they must stop."

The statement comes one day after Biden delivered his first State of the Union address, when he reiterated his pledge to have the backs of transgender youth as he repeated his call to pass the LGBTQ Equality Act.

Biden also spoke out on the same night as a federal court in Texas issued a temporary restraining order partially blocked the governor's order in a move that stops the state from investigating parents named in the lawsuit, which was filed by American Civil Liberties Union and Lambda Legal Defense and Education Fund.

Becerra similarly condemned the Texas order as among the recent "attacks against transgender youth and those who love and care for them are discriminatory and unconscionable."

"These actions are clearly dangerous to the health of transgender youth in Texas. At HHS, we listen to medical experts and doctors, and they agree with us, that access to affirming care for transgender youth is essential and can be life-saving," Becerra stated.

Becerra also announced a series a measures aimed at countering the Texas order, pledging to "take immediate action if needed."

From the HHS statement:
HHS is releasing guidance to state child welfare agencies through an Information Memorandum that makes clear that states should use their child welfare systems to advance safety and support for LGBTQI+ youth, which importantly can include access to gender-affirming care;

HHS is also releasing guidance on patient privacy, clarifying that, despite the Texas government's threat, health care providers are not required to disclose private patient information related to gender-affirming care;

The secretary also called on all of HHS to explore all options to protect kids, their parents, caretakers and families; and

HHS will also ensure that families and health care providers in Texas are aware of all the resources available to them if they face discrimination as a result of this discriminatory gubernatorial order.

The full statement from Biden issued by the White House follows:

"In recent days, elected leaders in Texas have launched a cynical and dangerous campaign targeting transgender children and their parents. The governor of Texas has directed state officials to open child abuse investigations into families simply because they have provided access to affirming care for their children. This is government overreach at its worst. Like so many anti-transgender attacks proliferating in states across the country, the governor's actions callously threaten to harm children and their families just to score political points. These actions are terrifying many families in Texas and beyond. And they must stop.

"Today, the Department of Health and Human Services has announced several actions to keep transgender children in Texas and their families safe — putting the state of Texas on notice that their discriminatory actions put children's lives at risk. These announcements make clear that rather than weaponizing child protective services against loving families, child welfare agencies should instead expand access to gender-affirming care for transgender children. Respected medical organizations have said that access to gender-affirming care for transgender children can benefit mental health, lower suicide rates, and improve other health outcomes. Children, their parents, and their doctors should have the freedom to make the medical decisions that are best for each young person — without politicians getting the way.

"In the United States of America, we respect the rights and dignity of all families. Transgender children bring fulfillment to their parents, joy to their friends, and are made in the image of God. Affirming a transgender child's identity is one of the best things a parent, teacher, or doctor can do to help keep children from harm, and parents who love and affirm their children should be applauded and supported, not threatened, investigated, or stigmatized. As I told transgender Americans in my State of the Union address yesterday evening, 'I'll always have your back as your President so you can be yourself and reach your God-given potential.' Jill and I are standing with the incredibly brave transgender children, their parents, and families throughout Texas and around the country, and we will continue to fight for a future where all children can thrive."