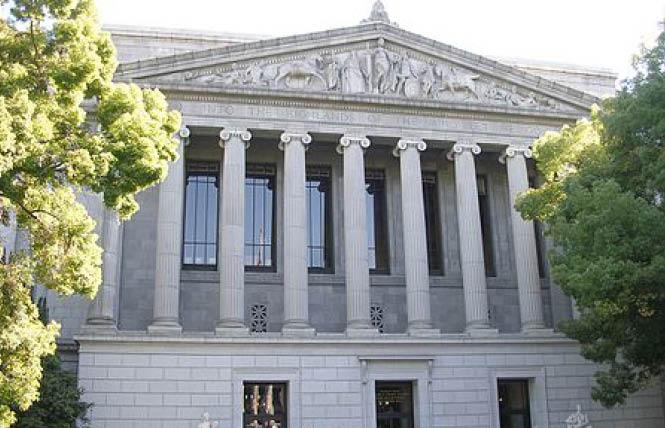 The Stanley Mosk Library and Courts Building in Sacramento is home of the 3rd District Court of Appeal. Photo: Courtesy Ballotpedia

Under Governor Gavin Newsom the number of LGBTQ judges continues to climb on the California bench. Since he took office in 2019, the number of out jurists on state courts has increased by at least 30%.

Due to omissions and a lag time in the reporting of LGBTQ demographic data for California judges, the growth rate in seeing LGBTQ people become judges is likely even higher. After a lackluster start during his first year in office, when the ranks of LGBTQ jurists remained flat, Newsom has helped spur two years of growth through his appointments to judicial vacancies.

According to the latest demographic data for the makeup of the state courts, annually released on March 1, there was an official tally of 76 LGBTQ judges as of December 31, 2021. But the number of LGBTQ people serving on the California bench is now at least 83, according to figures compiled by the Bay Area Reporter.

That total includes the swearing-ins of gay Alameda County Superior Court Peter E. Borkon last month and lesbian Justice Laurie M. Earl to the 3rd District Court of Appeal in January; both were appointed by Newsom. There are now five LGBTQ appellate justices in the state, even though the data for 2021 shows there being only two.

Borkon brings the number of out judges on the Alameda bench to 10, the most of any county in Northern California. Meanwhile, the Los Angeles County Superior Court continues to have the most out jurists of the state's 58 county court districts, with at least 26 serving as of December 31 based on the latest data.

Over the last 14 months the number of LGBTQ judges grew by at least 14%. It is a slight decrease from the nearly 16% increase in out jurists seen last March, as the B.A.R. reported at the time.

According to additional data released Tuesday by Newsom's office, he has appointed 169 people to the state's courts as governor, including 91 in 2021, from a pool of 1,082 applicants. Last year, 19 LGBTQ people applied, and seven received judicial appointments from the governor.

The Commission on Judicial Nominees Evaluation 2021 Statewide Demographics Report also released March 1 revealed it had reviewed 138 candidates' qualifications for judicial office last year, and 10 of those were known to be from the LGBTQ community.

The annual demographic information is often inaccurate and does not include every known LGBTQ jurist, as the forms are not always filled out by the judges or they will not answer all of the demographic categories they're asked about. Of the 1,706 respondents to the 2021 report, 370 justices did not provide their sexual orientation or gender identity; the bulk of those, 353 judges, serve on trial courts at the county level.

There continues to be one out member on the California Supreme Court due to Newsom's appointment in 2020 of Martin Jenkins, a gay Black man who had been the governor's judicial appointment secretary. All five of his colleagues on the state's highest court last year identified as heterosexual per the latest report.

Newsom last month nominated 4th District Court of Appeal Justice Patricia Guerrero to the seventh seat on the court. The first-generation Californian is expected to be confirmed March 22 and become the first Latina to serve on the California Supreme Court.

In the nine-county Bay Area, the superior courts in Marin, Napa, and Solano counties continue to have no LGBTQ judges on the bench per the judicial demographic data. Sonoma County now joins the list, as it went from having one in 2020 to none in 2021 according to the new report.

The 2021 data reports there are four LGBTQ judges in Santa Clara County. Yet there are at least six out members of the South Bay bench, according to a recent panel discussion with three of them.

Contra Costa and San Mateo counties continue to have two each, based on the 2021 data. San Diego County currently has the third most LGBTQ jurists of any of the state's 58 county courts, with seven as of the end of last year.

San Francisco had been tied with it, but the local superior court is now down to four gay and two lesbian judges due to the retirement last month of lesbian judge Angela Bradstreet. Newsom has yet to name her successor to the bench.

There continue to be five LGBTQ jurists serving in San Bernardino County, and three remain on the Orange County Superior Court. The local benches in El Dorado, Fresno, Imperial, Riverside, Sacramento, and San Joaquin continue to each have one out judge.

New to the official list in 2021 are Kings and Santa Cruz counties, with each now having one lesbian judge. In Santa Cruz it is due to the 2020 election of Judge Nancy de la Peña, who was sworn in last year to become the first out judge on her local superior court.

As of the end of 2021, the official data showed the California judiciary included 31 lesbian jurists, 40 who identified as gay, four bisexuals, and one transgender member.

Out South Bay judges tell their stories
Sign up!