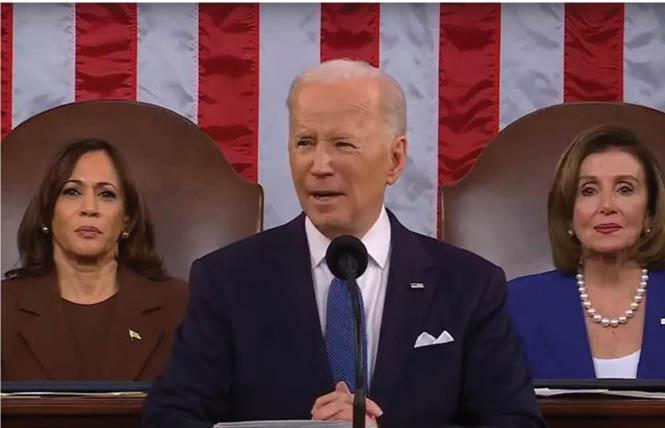 President Joe Biden renewed his call to pass the Equality Act in his State of the Union speech March 1. Photo: Screengrab via YouTube

In a State of the Union address front-loaded with calls to challenge Russian President Vladimir Putin's invasion of Ukraine, President Joe Biden on Tuesday called for assistance from Congress in enacting his domestic agenda — and renewed his call for passage of the Equality Act to advance LGBTQ rights.

"And for our LGBTQ+ Americans, let's finally get the bipartisan Equality Act to my desk," Biden said, making his strongest push yet for legislation that has been pending in the U.S. Senate for nearly a year despite Biden's campaign promise to sign it into law within his first 100 days in office.

Not only was it Biden's first State of the Union speech, it also marked the first time that two women were seated behind the president as he delivered the traditional oration on the status of the country and of his own administrative priorities. Behind Biden on his left was House Speaker Nancy Pelosi (D-San Francisco) and to his right was Vice President Kamala Harris, formerly San Francisco's district attorney.

Both were unmasked, as were most people in the House chambers, in a visual sign of how the country is moving into an endemic stage of the COVID-19 health crisis. Pelosi called Biden's roughly hour-long speech "a powerful message of progress, empathy and hope for America's working families" in a statement Tuesday.

"We know there is more work to be done," stated Pelosi. "The President spoke powerfully to the kitchen table issues facing America's working families and Democrats' plans to lower their costs. With the President's leadership, we will make more goods in America, lower the everyday costs of energy, child care, prescription drugs and more, bolster competition to deliver better prices for consumers, and create more good-paying union jobs across the country."

Echoing remarks he made in his speech to Congress last year in support of transgender youth, Biden also denounced anti-transgender bills in state legislatures, many of which seek to restrict access to transition-related care for youth and to keep transgender kids out of school sports.

"The onslaught of state laws targeting transgender Americans and their families is wrong," Biden said. "As I said last year, especially to our younger transgender Americans, I will always have your back as your president, so you can be yourself and reach your God-given potential."

Despite Biden's renewed call to pass the Equality Act, the legislation is all but dead after the House of Representatives passed it last March. Opponents have twisted the measure as a threat to sex-segregated spaces for women and the biological definition of gender. Biden's words, however, coincide with a recently launched campaign from the Human Rights Campaign highlighting the patchwork of legal protections for LGBTQ people in different states.

"With LGBTQ+ people lacking basic freedoms and protections in many states across the country, the Equality Act will finally ensure comprehensive, federal protections that make it clear that everyone deserves the opportunity to live free from harassment and discrimination — no matter where you live," she stated.

Biden incorporated the Equality Act in a speech where he included numerous items from his domestic agenda, such as elements of his Build Back Better plan. Among the items Biden ticked off were the ability of Medicare to negotiate prescription drug prices and expansion of the child care tax credit. The Build Back Better legislation is also dead in Congress, but supporters have held out hope that some components of the package still have a shot.

Also highlighted in Biden's speech were measures already signed into law, including the bipartisan infrastructure package, which Biden cited as evidence of working across the aisle, and the American Rescue Plan, which Biden credited with boosting the economic recovery amid the coronavirus pandemic. Not everyone in Biden's audience in the joint session of Congress agreed with him on the latter bill, however, as evidenced by Republicans booing the measure.

Critics have said Biden's moves have worsened the economy and instigated the continued rise in inflation that has increased the cost of goods from gasoline to groceries. Biden, however, made a point to include inflation in his speech, saying enacting his domestic agenda could alleviate rising prices.

"But with all the bright spots in our economy, record job growth and higher wages, too many families are struggling to keep up with the bills," Biden said. "Inflation is robbing them of the gains they might otherwise feel. I get it. That's why my top priority is getting prices under control."

Ukraine
The most prominent component of Biden's speech, as Russia continues to assault Ukraine, was efforts to contain Russia through economic sanctions, including an announcement the United States would join other countries in refusing to let Russian aircraft enter their national airspace. Biden also made clear the United States would stick to its obligation to defend allied nations in NATO, pledging to "defend every inch of territory of NATO countries with the full force of our collective power."

"In the battle between democracy and autocracy, democracies are rising to the moment, and the world is clearly choosing the side of peace and security," Biden said. "This is a real test. It's going to take time. So let us continue to draw inspiration from the iron will of the Ukrainian people."

Seated with Jill Biden in the first lady's box above the floor of the House was Oksana Markarova, Ukraine's ambassador to the United States, who waved a small blue-and-yellow striped flag of her country when Biden mentioned her in his address. Many others present in the House chamber brought Ukrainian flags to wave and had pins of Ukraine's colors on their lapels to show American solidarity with the country under onslaught by Putin.

Sarah Kate Ellis, CEO of the LGBTQ group GLAAD, said in a statement after Biden's speech, his words in support of LGBTQ people come at a critical time as Texas Governor Greg Abbott declared in a recent memo parents who provide transition-related care for their kids would be prosecuted for child abuse. (Abbott won the Republican primary for his reelection March 1 and will face off against the Democratic challenger, former congressmember Beto O'Rourke.)

"President Biden has delivered on commitments to include LGBTQ citizens in the promise of America," Ellis said. "Every lawmaker at every level of government must commit to do the same, especially for LGBTQ families and children under attack. The state of our union is only as strong as our action and commitment to ensure no marginalized person is left behind. LGBTQ voters are more motivated than ever to hold elected officials accountable in the midterms."