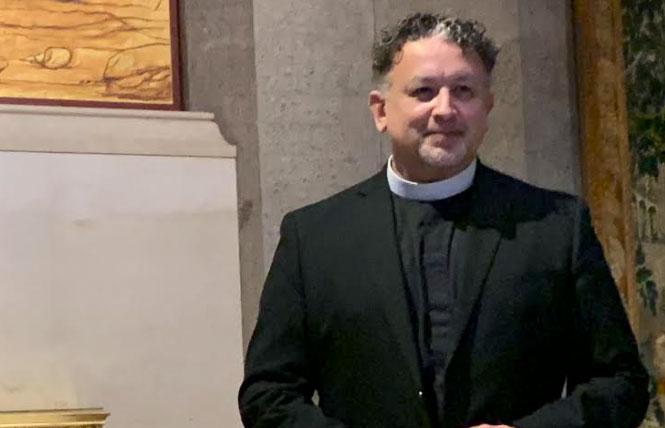 A gay San Francisco native has been appointed as a deacon at Grace Cathedral, the Episcopal church atop Nob Hill.

Miguel Bustos, a Latino man with a long history of public service, was installed last month as a deacon at Grace Cathedral. The 52-year-old Episcopalian was ordained and began his official duties February 13.

Born and raised Catholic in the Mission district, Bustos attended St. Peter's Elementary School at 24th and Florida streets before graduating from Archbishop Riordan High School. He credits his early life, under the guidance of the Sisters of Mercy, for realizing his spiritual journey.

"I have always felt God in my life, and growing up as a Latino in the Mission, the church played an intricate role in our community, giving our people hope," he said in an interview at Grace Cathedral on his first day working there.

Bustos talked about his first trip to Grace Cathedral as a kid. He went there to view a movie but said he felt insecure, and spoke of how he feared not being accepted because he was a kid from the Mission, and how that almost prevented him from attending. Now 40 years later, to be ordained the deacon at this same house of worship is, in itself, a powerful message for those who may feel marginalized or underrepresented, he noted.

The deacon position is not full-time, Bustos explained in a Facebook message. His day job is as chief of global initiatives and senior director of the Center for Social Justice at Glide, the church in the Tenderloin.

He noted that his almost four years at Glide have been an opportunity to encourage those around him to become more socially aware, especially when it comes to issues around race and justice. Bustos was quick to point out that his experience working for the late former Oakland Mayor Ron Dellums, Congressmember Barbara Lee (D-Oakland), former President Bill Clinton, and former Vice President Al Gore was a "continuation of his dedication to social justice and a chance to work with people of influence who can create policy and have the power for change."

Asked why he disavowed his Catholic upbringing and chose to become Episcopalian, Bustos attributed its welcoming sense of community. "The fact that women and LGBTQ+ people can be ordained and serve openly with a total embrace is a beautiful thing, and that has always been my perspective of what spirituality and religion should be," he said.

Bustos' ordination process took six years. It started with a time of discernment with his congregation of St. John the Evangelist Episcopal Church in the Mission district, which included three years with a local discernment committee and time with the Vestry. Afterward, Bustos' postulancy was approved by Episcopal Bishop Marc Handley Andrus in 2019, which allowed him to start studies at the School for Deacons in Berkeley and field education at Church of the Epiphany in San Carlos, a city on the Peninsula. He was ordained a deacon for the Episcopal Diocese of California on December 4, 2021 and was assigned to be the Cathedral Deacon at Grace Cathedral.

The role of a deacon is important. "On Sundays, deacons proclaim the Gospel, preach, and set the altar table for the Eucharist," Bustos wrote in the message. "We are also the ones that do the dismissal at the end of the service by saying, 'Go out into the world in peace to love and serve the Lord.'"

The Reverend Mark Stanger, interim executive pastor at Grace Cathedral, who's been with the church for over 20 years, could not be more thrilled to have Bustos serving with his staff.

"Every community is incomplete in fulfilling their vocation, and we at Grace Cathedral feel very strongly the need to connect more closely with the community," Stanger said. "We're grateful for the learning and the experience he'll bring us to help us be our truer selves."

Bustos summed up his role as that of a humble servant. "Being a deacon grants me the authority to go out and tell people they're loved and that the church is with them," he said. "To be able to let people know that they are loved and cared for is the greatest thing I can do as a deacon."

Andrus, who is based at Grace Cathedral, said that he couldn't be more delighted that Bustos will now serve at the church.

"The role of the deacon in an Episcopal congregation is to connect people to the needs of the world; no one is better suited to lead us at Grace into meaningful service with the people of our city than Miguel," Andrus wrote in an email.

Andrus added that Bustos has been on a spiritual journey for many years, a journey that has always been integrally tied to his quest for justice and equal rights for all.

Bustos explained what he likes about his new post.

"The most rewarding aspect of being a deacon is being a bridge between the church and the world," he wrote. "As a bridge, I find joy and passion in letting those oppressed and marginalized by society know that they are loved and not alone."