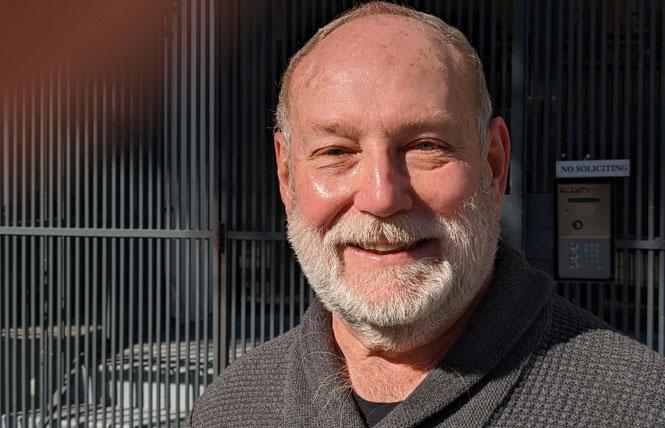 There comes a time in a person's life when they've done what they needed to do and they want, instead, to do what they're passionate about. Michael Armentrout has reached that point.

"It's an exciting organization," he told the Bay Area Reporter in a phone interview, "and I'm over the moon about the mission."

For Armentrout, 65, who described himself as a "mission-driven kind of guy," Maitri was a natural progression, he said, after doing HIV care and education for much of his life. Sixteen years ago, when he moved to San Francisco from Washington, D.C., he began working at the AIDS Emergency Fund then the Breast Cancer Emergency Fund. (AEF has since merged with PRC and is now called Emergency Financial Assistance. BCEF remains a nonprofit agency.) Like many gay men of his generation, Armentrout witnessed the deaths of many friends and acquaintances during the darkest years of the AIDS pandemic.

An accountant by training and a graduate of Duke University, the new executive director has been working in nonprofits, HIV, and gay civil rights for 40 years, he said. He's served on numerous boards, including those of the national Human Rights Campaign and PFLAG.

"That's always been the place where I find lots of happiness," he said.

Armentrout succeeds the Reverend Rusty Smith, a gay man and Anglican priest who took the helm in July 2019. Smith, whose last day at Maitri was February 24, was the fifth executive director at the organization in as many years.

"I specialize in organizational redevelopment, to help people refresh and fall back in love with their mission," Smith told the B.A.R. in 2019. "I know the importance of developing the mission so that it's relevant to its community's condition. Maitri hasn't lost its way — AIDS has changed. In my earlier years, AIDS was a death sentence. Now it's not. Palliative care is an evolving mission of who we are. Nonprofits have to adjust to the people that we serve, or we become irrelevant."

Indeed, the organization broadened its outreach under Smith, expanding into restorative care, as well as recovery support for people following gender affirmation surgery. Armentrout inherits an expansion of those services with Maitri's Affirmation Center. Currently in the works, the Affirmation Center will have three rooms at Maitri dedicated to providing pre/post-operative support to low-income people recovering from gender-affirming surgeries. Nowadays, more than 80% of Maitri's clients come for short-term medical respite and restorative care or gender affirmation care, according to the organization's website.

Maitri's focus has not really changed, said Smith in an email to B.A.R., but its focus of mission care has diversified.

"Maitri has been providing support for the transgender community who are HIV+ for years and years," Smith said, "and that contributed to our understanding of a gap in care for people who are not HIV+ and a recognition that we can do both well. There is a need and we have the knowledge, skills and experience to make a positive difference in a community that we already provide services to."

Back in 2019, Smith told the B.A.R. he hoped to continue working until he retired at 70, but "significant health issues" and a husband who wants to spend more time with him have prompted his departure at 65. But Smith didn't just up-and-leave. He spent about a month working alongside Armentrout to help his successor settle in.

"It is a privilege to work alongside someone who knows what he is doing and why he is doing it," Smith stated, "a real mission partner. I also think he is much smarter than me and I always try to hire smarter... always!!"

"I'm really grateful to [Smith] as is our staff and board," Armentrout said. Smith's decision to overlap his last month at Maitri with Armentrout's first has helped produce "a seamless transition," he added.

And there is much to do.

Armentrout faces "[t]he same challenges that all nonprofits in San Francisco face — too many people in need and not enough resources to meet those needs," said Smith. "We do not struggle because we do not have the tools to help people... we struggle because there is not enough money to support the tools that can help."

Armentrout will earn $150,000 a year as executive director. Maitri has an operating budget of $3.2 million.

Former Maitri ED back at the helm
Sign up!