San Francisco to have 2 Pride parades 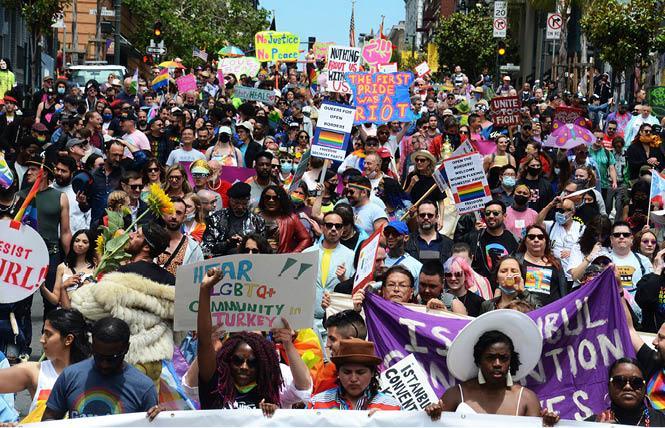 San Francisco is expected to have not one but two parades Sunday, June 26, as the Pride event returns after a two-year hiatus and will be joined by the third People's March.

And it's not just San Francisco. As COVID-19 seems, once again, to be slipping into the background, numerous LGBTQ communities around the country are making plans to finally throw the in-person Pride parades they've had to put on hold for the past two years. Organizers are optimistic but, understandably, cautious.

Everyone, however, is ready for a party.

San Francisco celebrants will hit the street — Market Street, that is — the last Sunday in June as part of its traditional two-day 52nd San Francisco Pride festival. This year's celebration, themed "Love Will Keep Us Together," comes after significant changes in leadership at SF Pride. Former executive director Fred Lopez who, because of the pandemic, never got to oversee an in-parade in his two-year tenure, stepped down February 17. Succeeding him is interim Executive Director Suzanne Ford, the first transgender person in the leadership role.

For those looking for something a little more activist-focused, DJ and drag star Juanita MORE!, who just stepped down from her reign as Empress 56, is helping organize the third People's March that is expected to take place the same Sunday. Following the Pride parade's original route, the People's March will begin on Polk Street, "led by Brown and Black and people of color," MORE! said in a phone interview with the Bay Area Reporter.

With a stronger focus on local arts and performers, and a notably smaller budget, the People's March arose during the first year of the pandemic. Unable to hold her usual Pride Day fundraiser party, as she had for the previous 16 years, MORE! and activist Alex U. Inn — a former SF Pride grand marshal and board member — organized the alternative event. Its start time and date isn't finalized, as MORE! is in the process of securing permits, but MORE! expects the People's March to take place the same day as its larger counterpart, as it has the past two years.

Plans in other cities
Farther south, there are big changes in store for Los Angeles Pride, scheduled for Sunday, June 12. After a two-year absence which, like San Francisco, meant not being able to mark its 50th anniversary, the parade is coming back in a new, old location. After years of marching through West Hollywood, the parade is returning to Hollywood itself, the site of the original route.

"LA Pride is thrilled to come together this year to commemorate the historic anniversary at the parade's first and original location," stated Gerald Garth, vice president of programs and initiatives for Christopher Street West Association Inc., in a news release. "As a mission-driven and community-centered nonprofit organization, [Christopher Street] recognizes that LGBTQ+ experiences of Los Angeles are broader than just one neighborhood. Considering feedback gathered since the pandemic began, we are committed to creating experiences and access to our entire community, including many of those who have been most underserved and underrepresented."

With the LA Pride parade moving back to Los Angeles, West Hollywood will hold its inaugural Pride festival June 3-5, with activities centered in and around West Hollywood Park, 647 N. San Vicente Boulevard.

In San Diego, organizers managed to keep events going throughout the year even if the pandemic forced them to cancel their bigger, annual parade in 2020. They did hold a smaller Pride march last July.

"We're sort of interesting in that our pride organization is year-round and is also an arts and advocacy organization," said San Diego Pride Executive Director Fernando Lopez Jr. That year-round focus enables the organization to run 35 different events throughout the year. It also helped to keep its finances in good shape, they said.

This year's parade, themed "Justice With Joy," is scheduled for July 16, one month later than celebrations in San Francisco and Los Angeles. The parade will begin at the Hillcrest Pride Flag at University Avenue and Normal Street, and proceed for 1.5 miles until it wraps up at Quince Drive.

Heading north, Portland, Oregon will see an even larger event than the last one it held in 2019. Organizers had introduced plans to increase their annual festival's footprint on the city's waterfront only to see them dashed because of the pandemic. Now, they're moving ahead with that expansion, said Debra Porta, executive director of Pride Northwest.

"Barring the world ending or something, we are planning to be back on the waterfront for the full two-day Pride waterfront festival," said Porta in a telephone interview.

"Our community was hit hard in Portland," said Porta, a lesbian. "We really sort of spun on a dime and our primary efforts were direct service." The organization was also able to rely on a rainy-day fund they'd been building for the past 10 years. No small matter for an organization that raises 80 to 90% of its funding from its annual Pride celebration.

As the B.A.R. previously reported, new organizers in Oakland are planning for a PrideFest September 11. There will not be a parade, and the exact location of the street festival has not been determined, though organizers would like it to be in the vicinity of the previous Oakland Pride event.

Other Pride organizations contacted by the B.A.R. did not respond to requests for comment.