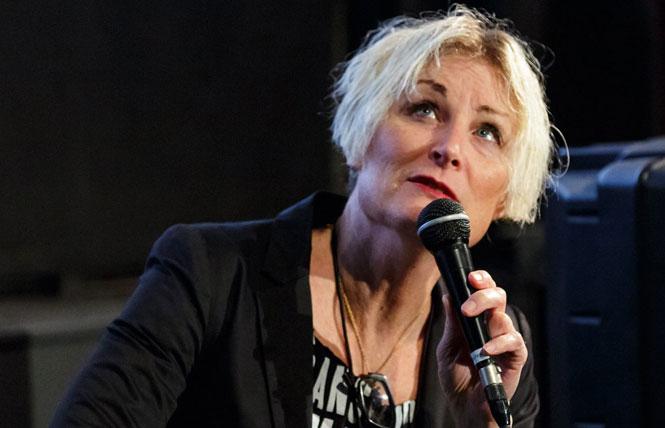 Horizons Foundation has released its latest slate of grants through its community issues program, which supports grassroots LGBTQ organizations in the Bay Area. The 31 grantee partners are receiving over $400,000 for their innovative work and most focus on groups that are traditionally underfunded and underserved.

In a news release, Francisco O. Buchting, vice president of grants, programs, and communications for Horizons, stated that the grantmaking process was guided by the principles of trust-based philanthropy and included a review panel. The grants awarded are primarily for unrestricted operating support, he stated.

"What a powerful cohort of grantees that Horizons is supporting," Shawna Virago, artistic director of the trans film festival, wrote in an email. "We feel honored that they invest in the San Francisco Transgender Film Festival, as we celebrate our 25th anniversary this year."

Several organizations received $10,000 grants. They are: Amor Para Todos, which joins with schools and communities to cultivate gender and LGBTQIA+-affirming environments; Dem Bois Inc., which provides economic aid to trans men of color to obtain gender-affirming surgery; Health Initiatives for Youth; LGBTQ Connection, which serves people in Napa and Sonoma counties; Louise Lawrence Transgender Archive, a Vallejo-based archive that preserves artifacts of transgender history; Peacock Rebellion, an East Oakland-based group that works with trans and gender-nonconforming people of color; and the Sebastopol Area Senior Center, which has an LGBTQ elder-focused mission.

Finally, the Prism Foundation received $5,000. It works with the API LGBTQ+ community.

Rainbow World Fund seeks donations for Ukraine
Rainbow World Fund, the LGBTQ-focused humanitarian organization based in San Francisco, has announced that it is raising funds to support the LGBTQ community in Ukraine.

Russia invaded Ukraine last week. Many people are displaced and over 100,000 have fled to Poland. The capital city of Kyiv is surrounded by Russian troops and Russia has placed its nuclear forces on high alert, noted RWF Executive Director Jeff Cotter in an email to supporters.

"Today we are unified with our world community in the concern for the people of Ukraine," Cotter stated. "During this crisis, already vulnerable LGBTQ Ukrainians are even more at risk to be further marginalized and scapegoated."

Lesbian pioneers featured on library panel
Engaging new generations in the progress toward equity is the subject of a live and online panel discussion Tuesday, March 15, from 6:30 to 8 p.m. in the Koret Auditorium at the main San Francisco Public Library, 100 Larkin Street.

LGBTQ+ historian, author, and filmmaker Robin Lowey will moderate the panel, titled "Lesbian Game Changers," which will include lesbian authors Jewelle Gomez and Carla Trujillo, and activist educator Crystal Jang. According to a news release, the conversation will include crucial discussions about feminism, queer culture, intersectionality, the need for intergenerational involvement, and how the COVID pandemic has affected the mental and emotional health of the queer community.

The women are featured in Lowey's book, "Game Changers: Lesbians You Should Know About," which is now in its second printing. It won best LGBTQ+ book in the Next Generation Indie Book Awards, the release stated.

Panelists will be sharing stories to elevate the discourse in the U.S. about the role queer history plays in advancing LGBTQ+ civil rights and social equity.

The program is sponsored by Friends of the San Francisco Public Library in support of the James C. Hormel LGBTQIA+ Center.

Admission is free and access to the in-person event is first come, first served. Masks are required. To view the online program, register here and receive an email with the Zoom access link.

SPUR says most programs are now free
SPUR, the San Francisco-based planning and public policy think tank, has long had a membership structure for people to access its programs. While it continues to have paying members, SPUR President and CEO Alicia John-Baptiste has announced that the majority of the organization's programming will now be free to the public.

SPUR has long been a gateway to accessing the Bay Area's important conversations on housing, sustainability, transportation, urban design, and more, she noted in a recent email announcement. "We believe education about the issues that affect the Bay Area empowers people to take an active role in creating a more equitable, sustainable, and prosperous region where everyone can thrive," she stated.

"But this education shouldn't come at a price," John-Baptiste wrote. "So beginning March 1, we're making the majority of our programming free to the public."

John-Baptiste stated that the change is the direct result of the ongoing generosity of SPUR members. "Member support has long made change possible by driving our research and advocacy," she stated. "Now it opens the door to a new audience of urbanists."

The agency just released its This text will be the linkspring calendar of programming>.

For more information about SPUR or to become a member, click here.