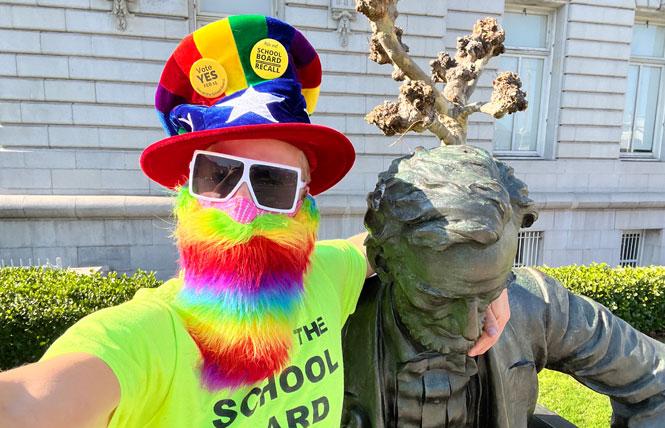 David "Gaybraham Lincoln" Thompson was one of the colorful advocates in the successful recall campaign of three San Francisco school board members. Photo: Courtesy David Thompson

The recall of San Francisco school board President Gabriela López and Commissioners Faauuga Moliga and Alison Collins united the entire city in demanding competent leaders for our children, and it would not have happened without the LGBTQIA community. LGBTQ parents played a prominent role in the campaign because we know protecting our civil rights begins at school.

Here are the stories of some of the key players from our community.

For myself, I have lived in SF for 37 years with my husband, Luis Tamayo. We live in Bernal Heights with our 10-year-old son, Lucas.

In February 2020 Lucas screamed, "I hate you for making me go to Zoom school!" That day I went to my first school board meeting to learn about the reopening plans. Instead, I heard them debating whether to rename Abraham Lincoln High School, while having no plan to reopen his school.

I created the Gaybraham Lincoln persona to show LGBTQ community support for the recall in a very visual way, and to lambaste the total absurdity of this situation. If I didn't laugh at it, I was going to cry, which probably wouldn't have been a good idea in front of my depressed child.

Gaybraham went to work gathering recall signatures. It was a life-changing experience to meet so many San Franciscans from so many backgrounds pulling together for our kids.

And I was gratified to see a drag character adopted by friends far beyond our community and embraced as a symbol of San Francisco's eternal spirit of love and community.

Cyn Wang
Wang is a San Francisco native whose family business, Wang Insurance, has been at 31st Avenue and Judah since 1979. Wang, her wife Tessa, and daughter, Sloane, live in central Sunset.

"As a very proud native San Franciscan, I believe the future of our city depends on the success of our public schools," Wang wrote. "SF has the fewest children of any major U.S. city, which makes me incredibly sad. Families who can afford it are either sending their kids to private school or leaving San Francisco entirely. Our city has proudly been a beacon of freedom and refuge for the LGBTQ community and for so many others, and was the birthplace of many civil rights and social justice movements. We must fight for quality public education so we can honor our history, truly deliver on equity, and make our city a place where families of all types are welcome.

"The recall was urgent to me because my daughter spent half of kindergarten and all of first grade out of the classroom learning via Zoom," she added. "While I watched my daughter become despondent and lose interest in learning, to my chagrin I saw no urgency or planning from the school board to reopen. Instead, I observed the opposite: they declined to hire a consultant to develop the reopening plan, failed to address a $125 million budget deficit, misguidedly prioritized school renaming and Lowell admissions while classrooms remained shut, and doubled down on anti-Asian tweets."

Joel Engardio
Engardio lives in the Lowell High School neighborhood with his husband, Lionel Hsu. He has lived in San Francisco for many years and helped organize a drive-through signature gathering effort to kick off the campaign.

"I'm not a parent, but good public schools are essential for a city to thrive," Engardio wrote. "And I want San Francisco to thrive. Everyone who lives here should care about having a competent school board because our city's future depends on investing in families — and the first step is to have well-run public schools. The future of our city is at stake.

"Lowell High School is in my neighborhood, so I got up at 6 a.m. every Sunday to collect signatures for the recall," he added. "On the first Sunday, I stood at the curb with a dozen other volunteers. We had no idea if any cars would show up. Then 500 came! It was a traffic jam. Incredibly, on February 15, 2021, 95% of the voters in my neighborhood said yes to the recall — the highest percentage in the entire city."

Shawn Riney
Riney has lived in SF for 35 years, currently in the Lower Haight, and works as a contractor for the Environmental Protection Agency.

"The recall became important to me the more I learned about it, because of the snubbing of Seth Brenzel," Riney wrote, referring to a gay white dad that the board declined to appoint to the volunteer Parent Advisory Council. "I went back right before the recall and watched the emotional testimony of his supporters during public comment and was appalled to see Moliga smirking.

"The painting over of the mural and the breaking of CEQA [environmental] laws resonated with me due to my EPA work," he said, referring to the murals at Washington High School. "I was really concerned about their arrogance and their inability or unwillingness to know the provenance and understand historical importance of that piece, and I'm glad they were recalled.

"Ordinarily I wouldn't even have noticed much about this, but those two things were the impetus for my votes to recall them," he added.

Siva Raj, co-lead, school board recall campaign
"I came out to my sons as bisexual after moving to San Francisco, a few months before the recall effort started," Raj wrote. "A big part of the reason I moved back to live in San Francisco is because I didn't want my kids to feel any less because their family was different from other dads and families.

"The school board meeting on February 9 was a complete shock to me — the commissioners subjected a gay dad (Brenzel) to two hours of public ridicule and rejected his candidacy to the all female half empty Parent Advisory Council," he added. "I felt his rejection, personally — just like every parent watching did — queer or straight.

Seth Brenzel
"My husband and daughter and I live in the Bernal Heights neighborhood, where we have been for nearly 25 years," he wrote. "I supported the school board recall campaign because our school board did not prioritize returning the tens of thousands of students in its care to in-person instruction as soon and as safely as possible. The board's misplaced priorities were first signaled by its failure to hire a (free to the district) consultant recommended by the superintendent, who would have helped the school district plan for safe reopening. This decision, made in June 2020, set the district back many months in planning for safe reopening. As a result, most district middle school and high school students did not return to school for 17 months (until August 2021), and most elementary school students had only 10-12 days of in-person instruction in that 17-month period.

"The behavior of the board worsened as the pandemic wore on. Some board meetings did not even have planning for school reopening on the agenda," Brenzel wrote. "When the topic was on the agenda, it was frequently not addressed until many hours into the meeting, sometimes very late into the evening after discussions of myriad other agenda items. One such occasion was when my nomination to a volunteer district parent committee was discussed for nearly two hours, while hundreds of families and teachers were waiting to learn more about plans for schools to reopen. This lack of focus on urgent priorities also appeared in the board's poor oversight of the district's budget, resulting in threats of state takeover due to California regulators' concerns about whether the San Francisco Unified School District was a 'going concern.' Throughout one of our city's most challenging times, the board dithered, again and again, at the expense of the education and wellbeing of the very schoolchildren they were tasked to serve."

Phil Kim
Kim is a proud gay educator and national education policy leader, supporting teachers in K-12 science, technology, engineering, and math (STEM) instruction in public schools across the country. He lives in the Castro and twice ran for election to the school board came up short.

"As an educator, I know that academic achievement is one central component to an equitable learning experience," Kim wrote. "Educators and parents alike want to do right by our young people, supporting them in reaching their goals, and ensuring our district is held accountable to the outcomes for children. That conversation simply isn't happening enough. We must refocus on the core responsibilities of the district, which includes academic success and effectively supporting educators.

"I want to be a parent someday, and I want to raise a family here in San Francisco knowing that the district is prepared to support us fully. It's why I became involved in the Lavender Youth Recreation and Information Center and San Francisco Court Appointed Special Advocates," wrote Kim, co-chair of LYRIC's board. "We must do better. Our students and teachers depend on it."

David "Gaybraham Lincoln" Thompson is a gay, 37-year resident of San Francisco who lives with his husband and 10-year-old son in Bernal Heights.

Guest Opinion: Why I'm running for Congress
Sign up!