Calls for justice raised at SF vigil for gay man 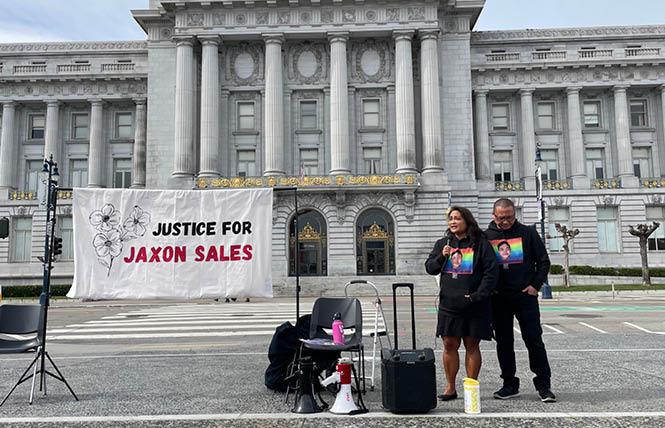 More than 80 people gathered in front of San Francisco City Hall February 26, calling for an investigation into the death of Jaxon Sales. Chants for justice echoed while, behind the crowd, visitors paid their respects to an altar of flowers and childhood photos of Jaxon Sales underneath a bare sycamore tree at Civic Center Plaza.

Angie Aquino-Sales and Jim Sales organized the gathering for their gay son with the help of the GLBTQ+ Asian Pacific Alliance and API Equality Northern California in order to elevate their demands that city officials reexamine the circumstances around their son's death and to provide mourners with a space to come together.

The B.A.R. obtained a copy of Jaxon Sales' autopsy report from the Office of the Chief Medical Examiner stating that the 20-year-old had died on the morning of March 2, 2020 from an accidental overdose of an acute mixed drug intoxication, including gamma-Hydroxybutyric acid (GHB), cocaine, and methamphetamine. He was found naked at the Rincon Hill apartment of a 41-year-old white man. His parents are asking for a more thorough investigation after hearing inconsistencies about the events surrounding their son's death and experiencing delays from police and medical examiner officials.

Their online petition asking the medical examiner and the San Francisco Police Department to reopen the case has more than 53,000 signatures. In the petition, his parents allege that an official with the medical examiner's office said that further investigation was not warranted because the "gay community uses GHB." When reached by the B.A.R. last month, a spokesperson for the medical examiner's office neither confirmed nor denied the statement to Jaxon Sales' parents but said that an individual's sexual orientation does not influence their medical determination.

While GHB is used recreationally by some gay men, it has also been linked to date-rape and murder. In a February 4 letter to SFPD Chief William Scott and Chief Medical Examiner Dr. Christopher Liverman asking them to more fully investigate the case, gay state Senator Scott Wiener (D-San Francisco) noted that GHB is, at times, used as a date-rape drug.

Two-year struggle
At the vigil in front of a diverse crowd of family, friends, and community activists, Angie Aquino-Sales shared new details about her two-year struggle to understand the circumstances behind her son's death. It took seven days for the family to view Jaxon Sales' body, she said, and the autopsy report arrived seven months after the medical examiner's office had promised. These details add to the mounting concerns from the family, who have already called on the SFPD to question the 41-year-old man and another man, both of whom were with Jaxon Sales the night he died.

After SFPD Chief William Scott told the B.A.R he wanted to meet with the family, Angie Aquino-Sales and Jim Sales reached out to his office, but they have yet to meet. As the B.A.R. previously reported, the city's Human Rights Commission is working to facilitate a meeting between the parents and SFPD. Scott told the B.A.R. during a February 18 interview that he would like to sit down with Jaxon Sales' family.

Scott also said during the interview that, right now, SFPD doesn't have any new information on the case. Scott said "there is no statute of limitations on murder" and that, if foul play is suspected, police would investigate.

But he added that, as of right now, "we don't have anything new."

Following the petition, a number of leaders have stepped up to help the Sales family. That list includes GAPA, APIENC, as well as the office of District 6 Supervisor Matt Haney and the Office of Sexual Harassment and Assault Response and Prevention at the city Human Rights Commission.

Janice Li, the first queer Asian American woman elected to the BART transit board, also attended the vigil, as did Wiener, who wanted to personally meet Jaxon Sales' parents and to express his support.

"I'm just so saddened and depressed about what happened to Jaxon and distressed about the lack of information," he said to the crowd. He was grateful to the family for coming forward to ensure this doesn't happen again. 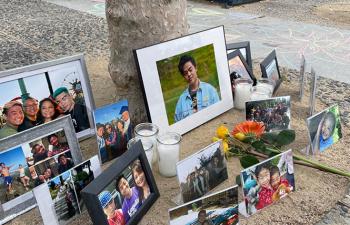 Stories about Sales' life
As other family members stepped up to speak, the political demands faded behind stories of Jaxon Sales' life. He was independent, they said, sometimes to a fault. His aunt recalled how Jaxon ran away from his home in Oakland and found himself in Los Angeles with just $20 in his pocket.

Standing in the audience, Julia Jung wasn't surprised by the colorful stories. When they were in elementary school together, Jung remembers how Jaxon Sales pranked the school by pulling the fire alarm.

His mother remembered that day too. "Jaxon was definitely a jokester," she said to the crowd with a smile. He was outspoken and often sarcastic but, as he got older, those jokes had a serious side too. Once, at Disneyland, he called out a security guard for racially profiling his family, which is Korean American and Filipino American.

His older brother, Alexander Sales, who is also gay, remembers sitting in the car with his brother, outside their home, when Jaxon admitted that he had written a letter coming out to their parents before burning it out of fear.

"I was the first one he came out to," his brother recalled. Meanwhile, inside the house, their parents were wondering why it smelled like fire.

But that's not what Angie Aquino-Sales is thinking of these days. What she misses most is the smell of coconut oil that her son used to moisturize.

GHB: The 'elixir' that no one is talking about (but everyone is drinking)
Sign up!