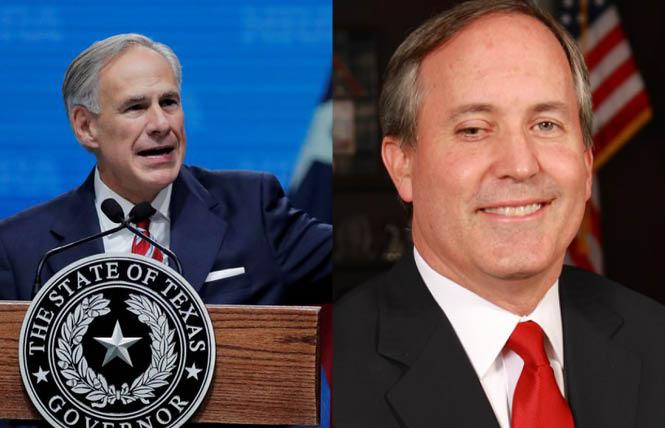 Agencies in Texas that serve trans children and youth say that they will keep providing services in spite of a letter from Governor Greg Abbott ordering state agencies to investigate gender-affirming care on minors as child abuse.

On February 22, Abbott — a Republican who is running for reelection — sent a letter to Jaime Masters, commissioner of the Texas Department of Family and Protective Services, calling on the agency to "conduct a prompt and thorough investigation of any reported instances of these abusive procedures in the state of Texas." The letter followed an opinion issued the previous week by Texas Attorney General Ken Paxton (R), in which he equated treatment for trans kids with child abuse, going so far as to suggest that children whose parents approve such procedures are victims of Munchausen Syndrome by proxy, where "an alleged perpetrator ... attempts to gain medical procedures and issues for [their] child for secondary gain for themselves..."

Paxton, too, is running for reelection.

The opinion was a response to inquiries from state Representative Matt Krause (R-Fort Worth) in which he asked, "whether the performance of certain medical and chemical procedures on children — several of which have the effect of sterilization — constitute child abuse."

Krause, who is running for Tarrant County district attorney, is notoriously anti-LGBTQ and has authored previous attempts to legalize discrimination against LGBTQ Texans in the past. Just last year, he attempted to draw scrutiny of some 800 book titles he believed were problematic and might "make students feel discomfort, guilt, anguish, or any other form of psychological distress because of their race or sex," according to a November 18, 2021 story in Dallas Morning News.

Abbott's call to DFPS to investigate "a number of so-called 'sex change' procedures" is not legally binding but critics in Texas call it a cynical attempt to bolster his standing among conservative voters ahead of the March 1 Texas primary.

"This is a fabricated matter," said Cox, a lesbian and a mother, in a phone interview. "These types of statements and actions are adding to the mental stress and climate of discrimination."

While her organization has no plans to change how it offers its services to its trans clientele, she said the overall atmosphere in the state is increasingly uncomfortable, particularly for its trans citizens.

Keaton Johnson, a gay man who just left his position as an advocate supervisor for Court Appointed Special Advocates, or CASA, in Dallas, agreed. Johnson recently relocated to Birmingham, Alabama to pursue his MSW degree.

"It definitely doesn't feel good, but it hasn't felt good in a few years," Johnson said in a phone interview. "It's a long narrative of attacking the most vulnerable people, queer kids and trans kids in particular."

That narrative continues to inspire fear.

"I think our families are panicked, understandably so," said Andrea Segovia, 28, in a phone interview from Austin. "They're trying to do what is best for their kids, like any parent."

Segovia, a bi cis woman who has a trans partner, is the senior field and policy adviser to Transgender Education Network of Texas. They are raising a child who identifies as nonbinary.

Adding to the air of fear in Texas, she said, is how confusing the opinion issued by Paxton is. At 13 pages, it´s much longer than Paxton´s usual two-page opinions, said Segovia.

Paxton's opinion
Throughout the opinion, Paxton contorts other rulings and cases into alignment with his efforts to justify his classification of childhood trans care with child abuse, including his call for Texas to "play its part as parens patriae" because he feels it's in the state's interest to protect trans kids' abilities to procreate. Paxton has also spoken out against federal efforts to enforce masking mandates during the COVID pandemic, calling them government overreach.

In another reference, Paxton attempts to compare gender affirmation treatments with forced sterilization. Referring to Skinner v. Oklahoma, a case heard in 1942 by the United States Supreme Court, he responded to Krause by stating, "To the extent the procedures you describe cause permanent damage to reproductive organs and functions of a child before that child has the legal capacity to consent, they unlawfully violate the child's constitutional right to procreate."

Sowing confusion
Ultimately, it appears that many simply find the moves by the state's ultra-conservative leaders confusing.

"It's not clear, like so many other things in the state of Texas, how this should be enforced," said Segovia. The governor's letter "has left people in the dark."

Both Segovia and Johnson are concerned by how this could be carried out by the average social services employee in Texas. While organizations such as CASA have developed programs to help its employees offer services to LGBTQ kids, Johnson pointed out, LGBTQ competence is not a requirement in Texas' child protection services.

"The system is already found to be violating the rights of children in the past few years," said Johnson. ¨This just makes their job more difficult."

The Texas Tribune reported in 2020 that federal monitors found the state's child welfare system continues to expose children to harm.

Jim Dinh is a licensed clinical social worker who identifies as nonbinary and trans and is president of the board for Trans-Cendence International, an education and advocacy group for trans rights in the Lone Star State. They said the governor's characterization of gender-affirming care as child abuse is only making a bad situation worse.

"I'll quickly comment that this has been a frightening and exhausting time for trans youth and their families," they wrote in an email to Bay Area Reporter. "I am concerned for both the families I serve and for the professionals that provide gender-affirming care."

"If our legislators really want to protect children that means recognizing that gender-affirming care is not abuse," Dinh continued. "It's health care. Professionals need the freedom to do their jobs and assess the needs of youth and their families and provide appropriate care."