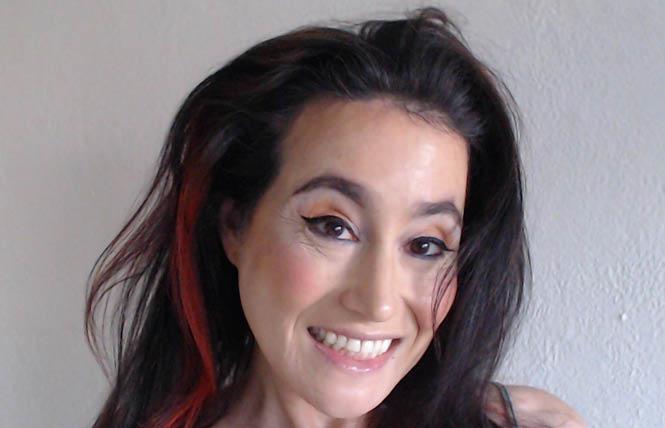 "As a former systems engineer who graduated from Stanford, it is time we had someone commensurate with the demographics of this city. We live in a broadband world; let's retire the dial-up derelicts from our politics," said Von Krieg, 31, who is bisexual, during a phone interview with the Bay Area Reporter about her candidacy.

Due to the decennial redistricting process, in which California lost a House seat, Pelosi's 12th Congressional District covering much of the city was renumbered this year. She is expected to easily win reelection this fall to an 18th two-year term.

"While we have made progress, much more needs to be done to improve people's lives," Pelosi said in January when she officially launched her reelection campaign. "Our democracy is at risk because of assaults on the truth, the assault on the U.S. Capitol, and the state-by-state assault on voting rights. This election is crucial: nothing less is at stake than our democracy. We don't agonize, we organize."

Ever since there has been speculation she could resign following the November election, especially if Democrats lose control of the House. Adding to the talk is Pelosi having pledged years ago that she would not seek another term as speaker should her party prevail in this year's midterm elections.

Should she decide to step down, it would spark a special election for her seat that would draw a number of prominent local Democratic leaders. Often mentioned as candidates are Pelosi's daughter, Christine, and gay state Senator Scott Wiener (D-San Francisco).

First to be decided, though, is who will be running against Pelosi on the fall ballot. Under the state's jungle primary system, the top two vote-getters regardless of party affiliation in the June contest advance to compete in the November general election.

Other candidates
While Pelosi is expected to again be the first-place finisher in the primary, less clear this year is who will take the second-place spot. Republican John Dennis, currently chairman of the San Francisco Republican Party, is once again running against Pelosi.

He first ran in 2010, the last time there were party primaries to pick candidates, and lost to Pelosi that fall. Two years later when the open primary system was first instituted, Dennis again made it to the fall ballot only to lose against Pelosi.

He did so a third time in 2014 but failed to survive the primary on his fourth try for the House seat in 2020. Dennis landed in a distant third place behind democratic socialist Shahid Buttar, a cisgender heterosexual man who also identifies as queer due to his gender expression being fluid.

Yet his campaign cratered that summer after Buttar was accused of fostering a toxic workplace by several campaign staffers and faced a charge of sexual harassment. He continues to vigorously deny both charges as being baseless smear campaigns and is suing the San Francisco Chronicle over its coverage of the matter.

Eric Curry, a gay, genderqueer native San Franciscan, had announced last April his candidacy for Pelosi's House seat. He told the Bay Area Reporter last week that he plans to have an announcement about the status of his campaign sometime in March.

Several other people are running, including Democrat Jeffrey Phillips, who was born in Walnut Creek. The 2007 graduate from the California Institute of Technology is a driver for Lyft and an equity trader at Green Apple Capital LLC, according to his LinkedIn profile.

A fresh face
In a recent email about her candidacy, Von Krieg touted herself as the best option for voters looking to cast their ballot for someone other than the incumbent or Pelosi's previous opponents. Acknowledging the support Pelosi continues to have among San Francisco's electorate, Von Krieg also made a plea for financial support even if people decide not to vote for her.

"Even if you find the opponent more to your liking, know that as a transgender candidate, your contribution will go toward uplifting the LGBT and progressive movements," wrote Von Krieg. "Additionally, we'll be employing (at SF's Living Wage) and TRAINING scores of BiPOC, LGBT and at-risk youth in skills that will give them a firm foundation in a variety of business capacities."

She had planned to run in the 2020 election as a write-in candidate but a miscommunication with the elections department prevented her from doing so, Von Krieg told the B.A.R. She is hopeful of learning this week that she has submitted enough valid signatures needed to waive the filing fee for this year's contest.

For about three years Von Krieg has lived near Alamo Square. She said her family is initially from Austria and traces its history in the U.S. back 200 years to the Gold Rush days of California.

Her father, a real estate developer, had dual U.S. and Austrian citizenship, while her mother was a homemaker and Greek by birth. Now deceased, her parents initially met at the Playboy mansion, Von Krieg said.

Born in Austria, Von Krieg said she grew up "bi-coastally" in Pebble Beach, California and the Upper East Side of Manhattan in New York City. She told the B.A.R. she first came to the Bay Area to attend Stanford and graduated in 2000 with a degree in computer science and economics.

As a young adult Von Krieg came out to her family and friends as being transgender. She said it led to strained relationships that continue to this day.

"I didn't have the luxury of having hippy-dippy relatives and friends who would support me," said Von Krieg. "It was a very painful, lonely time for me."

According to her LinkedIn profile, she earned a master's of engineering from MIT with an emphasis on cryptography and security. In 2012, Von Krieg turned to acting and appeared in various uncredited roles on the television shows "Looking," HBO's dramedy about gay life in San Francisco, "2 Broke Girls," and "Murder in the First," according to her IMDb profile.

Von Krieg in 2014 was also a guest host, appearing as "The Baroness," of the "Creepy KOFY Movie Time" show on the local TV station KOFY. More recently she has been trying to make a movie about Leelah Alcorn, a transgender teen who died in 2014 after throwing herself in front of a truck on an Ohio freeway.

"The entertainment industry is still recovering, so I am just feeling offers right now. Really, this campaign is a full-time job," said Von Krieg, explaining that most of her work opportunities dried up due to the COVID pandemic. "When I am not actively engaging in my campaign, I am usually helping local causes here."

Von Krieg points to Pelosi's criticisms of the movement to defund police departments and failure to create a universal health care system during her lengthy time in Congress as just two of the reasons why she feels the congressional leader should be ousted from office this year. She said she is a "huge fan" of instituting a universal income at the expense of billionaires and believes federal tax officials should inform people if they owe taxes or will be receiving a refund instead of forcing people to file their own taxes each year.

"I welcome the opportunity to debate her or anyone else on these issues," she said. "There's no doubt in my mind if I could present my case to voters over her case, I win in a heartbeat."

Von Krieg signed a pledge in support of a term limits amendment that would restrict House members to three two-year terms and U.S. senators to two six-year terms.

"They don't need to be contiguous either. I think non-contiguous terms are the best because it is a chance to bring in new blood," said Von Krieg. "Really, all I need is one term to make history for the transgender movement in and of itself."

Von Krieg's campaign website can be found here. Information about her candidacy can also be found on her Facebook page.