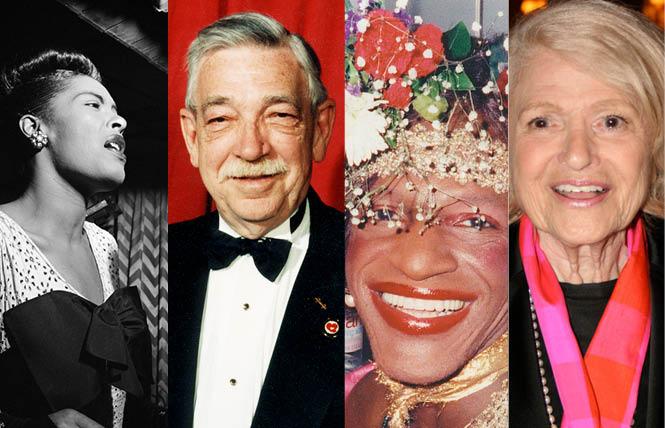 The project, which started in 2014, now has 36 plaques installed throughout the Castro, according to a news release from the all-volunteer board, with another eight scheduled for placement this spring. In 2021, the board unanimously selected San Francisco lesbian trailblazer Phyllis Lyon, who died in 2020.

Lyon and her partner, the late Del Martin, were the first same-sex couple to wed in San Francisco — twice, in 2004, which was voided, then in 2008 shortly before Martin died. The women co-founded the Daughters of Bilitis and published the Ladder, the first monthly lesbian publication focused on politics, fiction, poetry and connecting lesbians across the country. (Martin was already inducted in the honor walk in the first class.)

The board recently finalized the other 23 people who will make up the new class of honorees. The board now begins the process of raising about $150,000 to install the plaques. Each one costs about $6,000 to fabricate and install, according to the release.

B.A.R. publisher named
The B.A.R., which is at the tail end of its 50th anniversary year, had long sought induction for Ross (1934-2003), a gay man who launched the nation's oldest continuously published LGBTQ newspaper in the U.S. in April 1971. The nascent queer community quickly turned to the paper to find out what was going on. Politicians started to seek support from the LGBTQ community — and the paper's endorsement — and out leaders began to run for, and win, elected office. The gay late supervisor Harvey Milk was a political columnist for the paper.

During the AIDS epidemic, the B.A.R. became a source of news at a time when mainstream media outlets weren't covering the disease. Ross served for many years on the Golden Gate Bridge, Highway, and Transportation District board as well as the San Francisco Ballet board. His philanthropic work included co-founding the old Tavern Guild, and he served on the board of numerous nonprofits such as the former AIDS Emergency Fund, Meals on Wheels, and the Castro Lions.

Publisher Michael Yamashita said he was glad Ross would be part of the historical project.

"I'm gratified that Bob will join other LGBTQ pioneers for this distinct recognition," Yamashita stated. "Besides co-founding the Bay Area Reporter 51 years ago, he was an influential community leader who participated in the founding of many early gay organizations like the Tavern Guild, the Gay Olympics [now Gay Games] and AEF. He was a philanthropist to many community, AIDS, and arts and civic causes, which his legacy continues to support through the Bob Ross Foundation.

"He was one of many pioneers who came to San Francisco and helped make it a haven and community for LGBTQ people everywhere," Yamashita added.

Singers, filmmakers, and musicians
The honor walk's release outlined those being recognized. Board president Donna Sachet stated that the list is a mix of people who are "quite famous" and others who are not as well-known, as has been the case with previous inductees. One of the reasons for the honor walk is so that passersby can learn a little history about LGBTQs and their contributions around the world as they walk along main streets in the Castro.

Among the more famous inductees is Holiday (1915-1959), the Harlem-based singer and jazz legend who courageously made public a wide range of personal and political truths, notably recording 1939's anti-lynching song "Strange Fruit," widely considered one of America's most influential protest songs.

Holiday was the godmother of Bevan Dufty, a gay man who is an elected member of the BART board and a former San Francisco supervisor who represented the Castro and is now a resident. In a text message to the B.A.R., Dufty said he was happy with Holiday's inclusion in the honor walk.

"It's just thrilling that my godmother will be part of the Castro," Dufty wrote. "She had many women lovers and, if she were alive, she would be the most out and queer jazz icon."

Another inductee is gay filmmaker Peter Adair (1943-1996), best known for 1977's "Word is Out: Stories of Some of Our Lives," which offered a clear, detailed picture of the broad spectrum of the LGBTQ population.

Tullalah Bankhead (1902-1968) is another inductee. Openly "ambisextrous" and having relationships with men and women, the stage and screen actress, gay icon, and pioneering civil rights activist strongly opposed racism and segregation.

Esther Eng (1914-1970) was the first woman to direct Chinese-language films in the U.S. She is recognized as a female pioneer who crossed the boundaries of race, language, culture, and gender.

Marlon Riggs (1957-1994) is in the class. He was an award-winning gay Black filmmaker whose examinations of Black gay life boldly confronted racism and sexual repression, most notably with 1989's "Tongues Untied."

Sophie Xeon (1986-2021) was a Grammy-nominated musician, record producer, singer, and DJ who reframed trans self-expression for millennials and Generation Z cohorts with her brash and "hyperkinetic" take on pop music.

Authors
There are several authors among the inductees. Gloria Anzaldua (1942-2004) was a Tejana-Chicana who wrote widely on feminism, queer theory, and marginalization. She's best known for her groundbreaking books, 1981's "This Bridge Called Me Back," and 1987's "Borderlands/La Frontera: The New Mestiza."

Butch lesbian and transgender activist Leslie Feinberg (1949-2014) is widely recognized for her theoretical work on transgender history, her anti-racist activism, and as a fighter for social justice. Feinberg was best known for her first book, the novel "Stone Butch Blues," and a nonfiction book, "Transgender Warriors: Making History." Feinberg familiarized readers with transgender, nonbinary, and genderqueer terms, pronouns, concepts, and politics.

Lorraine Hansberry (1930-1965) was the first African American woman to have a play performed on Broadway and the youngest playwright to receive the New York Drama Critics' Circle Award. Her ex-husband, Robert Nemiroff, restricted access to her lesbian-themed correspondence, diaries, and other materials. In 2013, decades after Nemiroff's death, the new executor of Hansberry's estate released the materials to scholar Kevin Mumford. He wrote about them for Out History.

Langston Hughes (1901-1967), a gay Black man, was a leader of the Harlem Renaissance. His poetry, plays, novels, and columns gave fresh insight into the experience of Black men in the U.S.

Playwright Larry Kramer (1935-2020) was a gay man best known for his play "The Normal Heart" and for his involvement in Gay Men's Health Crisis and ACT UP. He also wrote the 1978 book "Faggots," a parody of late 1970s gay life that was widely ridiculed for its implicit criticism of promiscuity and recreational drug use, as the B.A.R. reported in its obituary. Many gay bookstores wouldn't carry it.

Activists
Activists are represented in the class, including the aforementioned Johnson (1945-1992), who was known as the "Mayor of Christopher Street." Johnson was a founding member of the Gay Liberation Front and co-founder (with the late Sylvia Rivera, who was inducted in the second class) of the radical activist group Street Transvestite Action Revolutionaries, or STAR.

The aforementioned Windsor (1929-2017) became an activist for marriage equality when she was the lead plaintiff in a lawsuit against the federal government over its anti-gay Defense of Marriage Act. In 2013 the U.S. Supreme Court overturned a key provision of DOMA, which led to the Obama administration extending rights, privileges, and benefits to married same-sex couples.

Others are Gilbert Baker (1951-2017), an artist and gay rights activist who co-created the first rainbow flag. As the B.A.R. has previously reported, Baker came up with a rainbow flag design that had eight colored stripes with the help of his friends Lynn Segerblom, who now lives in Southern California, and James McNamara, who died of AIDS-related complications in 1999. One version also sported a corner section of stars to mimic the design of the American flag. Baker would go on to reduce the number of colored stripes to just six and turned the rainbow flag into an international symbol of LGBTQ rights.

Bobbi Campbell (1952-1984) was a gay man and activist who was the first to come out publicly about his AIDS diagnosis early in the epidemic. A public health nurse in San Francisco, his column in the now-defunct San Francisco Sentinel newspaper helped readers empower themselves. He was the 16th person in the city to be diagnosed with Kaposi's sarcoma and published photos of his lesions so that other gay men would know what to look for.

Carlos Jáuregui (1957-1996) was an Argentine activist who fought for the rights of the full spectrum of the LGBTQ community.

Xulhaz Mannan (1976-2016) was a Bangladeshi human rights activist and founder of the country's first and only gay magazine, Roopbaan. He worked for the United States Agency for International Development and was hacked to death by unidentified men posing as couriers delivering a package. A friend of his, Tanay "Tonoy" Mojumdar, was also attacked and killed in the incident.

Artists and others
An artist and others round out the inductee list.

Bernice Bing (1936-1998) was a recognized Bay Area painter whose work bridged her Chinese American background and her interest in modern philosophy, women's issues, and abstract expression.

Dr. Magnus Hirschfeld (1868-1935) was a pioneering German physician and sexologist who was an outspoken advocate for sexual minorities in the early 20th century.

Charlie Parkhurst (1812-1879) was a famous California stagecoach driver in the Gold Rush era who was discovered, upon his death, to be biologically female; decades before women's suffrage was legal, Parkhurst voted as a man in the 1868 presidential election.

Dr. Oliver Sacks (1933-2015) was a neurologist, naturalist, and historian of science who wrote of his experiences with some of his patients to inform and inspire others. He came out as gay publicly in his memoir that was published shortly before he died, according to NBC News.


Updated, 3/5/22: This article has been updated to accurately reflect the item on Jon Sims and the SF Lesbian/Gay Freedom Band. 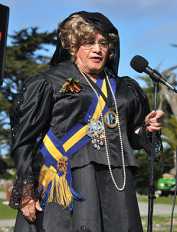