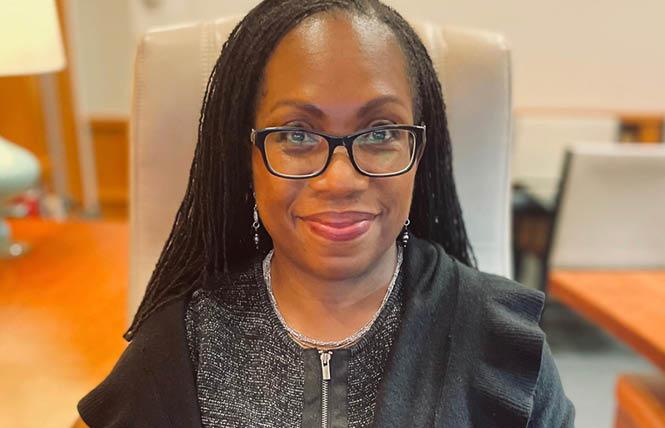 In a historic move, President Biden said February 25 that he is nominating Ketanji Brown Jackson, currently a judge on the D.C. Circuit Court of Appeals, as his choice for the U.S. Supreme Court. The selection would make Jackson the first Black woman to serve on the high court and fulfills a campaign promise Biden made two years ago to nominate a Black woman.

Jackson, 51, is a favorite among progressives because of her background as a former public defender in D.C. and former clerk for U.S. Associate Justice Stephen Breyer, whose seat she would fill after his announced retirement this year, if confirmed by the U.S. Senate.

I'm proud to announce that I am nominating Judge Ketanji Brown Jackson to serve on the Supreme Court. Currently serving on the U.S. Court of Appeals for the D.C. Circuit, she is one of our nation's brightest legal minds and will be an exceptional Justice.https://t.co/iePvhz1YaA pic.twitter.com/Nzqv2AtN8h— President Biden (@POTUS) February 25, 2022

Joni Madison, interim president for the Human Rights Campaign, hailed the choice of Jackson for her "integrity, professionalism, and unwavering commitment to the Constitution."

"Her tenure on the bench provides ample evidence that she is both prepared and trustworthy of this highest privilege, and responsibility, that comes with sitting on our highest court," Madison said.

Madison declared the Human Rights Campaign supports Jackson: "After a careful review of her record, it is clear that Jackson's demonstrated fidelity to the principles of our Constitution instills confidence that she will continue Justice Breyer's legacy as a champion of equality."

In terms of LGBTQ issues, however, Jackson's record is not without its blemishes. She once worked as an adviser for a Baptist school in the Maryland suburbs that had a mission statement against LGBTQ people and abortion.

The now-defunct school, known as Montrose Christian School, had a statement on its website condemning homosexuality and abortion consistent with its religious views, as documented by the conservative Washington Examiner at the time of Jackson's confirmation process for her current seat on the D.C. Court of Appeals.

The mission statement urged students to uphold a "Christian character," which among other things in the views of the school, meant they should oppose "all forms of sexual immorality, including adultery, homosexuality, and pornography." Abortion is also implicitly condemned in the mission statement: "We should speak on behalf of the unborn and contend for the sanctity of all human life from conception to natural death."

Upon Jackson's nomination, conservatives smarting from attacks on now-U.S. Associate Justice Amy Coney Barrett during her confirmation process over her ties to religious groups with anti-LGBTQ views, as well as her affiliation with the anti-LGBTQ legal group Alliance Defending Freedom, may cynically highlight Jackson's past affiliation with the school as a reason to attack her or progressives as hypocrites for not opposing her confirmation.

Jackson addressed her past work with the school during the confirmation process for her current job in response to questions from Senator Richard Durbin (D-Illinois), maintaining her role on the advisory board for Montrose Baptist Church was limited and she was unaware of its position statement.

"I was aware that Montrose Christian School was affiliated with Montrose Baptist Church," Jackson said. "I was not aware that the school had a public website or that any statement of beliefs was posted on the school's website at the time of my service. My service on the advisory school board primarily involved planning for school fundraising activities for the benefit of enrolled students. I did not receive any compensation for my service."

Nan Hunter, an emeritus law professor at Georgetown University who has written about LGBTQ issues, previously downplayed in an email to the Blade Jackson's affiliation with Montrose Christian School as evidence she would be hostile to LGBTQ people as a Supreme Court justice.

"Judge Jackson apparently volunteered for a year to help raise money for student services at a Christian school in the D.C. suburbs," Hunter said. "There is no indication anywhere in her professional record or personal experience that she shares anti-gay views. In my opinion, her lifelong commitment to equality more than outweighs any concern that she might be biased against LGBT rights."

Reactions
Alex Padilla, California's junior Democratic senator who sits on the Senate Judiciary Committee, said he looked "forward to hearing more from Judge Jackson as we conduct a fair and timely confirmation process."

In a statement Padilla praised Biden for his historic nomination to the country's highest court and called Jackson "an outstanding and highly qualified jurist." He had voted last year in support of her appointment to the federal appellate court.

"Judge Jackson's nomination marks an important step forward in ensuring the Supreme Court better reflects and understands the country it serves," stated Padilla. "For far too much of our history, America's halls of power - including our courts of justice - have failed to include the voices and perspectives of all our people. For more than two centuries, the Supreme Court has never included the perspective of a Black woman. President Biden's nomination of Judge Jackson to become the first Black woman to serve as a justice on the Supreme Court is not just historic — it is long overdue."

Progressive groups were undeterred by Jackson's work for Montrose Christian School in their support for her Supreme Court nomination.

Fatima Goss Graves, CEO of the National Women's Law Center, said in a statement Jackson is "an eminently qualified public servant with distinguished experience as a federal judge."

"As a district court judge, she ruled on over 550 cases and is renowned for her careful, methodical approach to ensuring equal justice under the law on reproductive rights, disability rights, and workers' rights," Graves stated. "It is incumbent upon senators to give her a fair and timely confirmation without obstruction, honoring their constitutional duty to advise and consent and their moral duty to treat her with the respect and dignity she deserves."

"Judge Jackson is brave, thoughtful, and a fierce defender of justice," stated Imani Rupert-Gordon, a queer Black woman who is NCLR's executive director. "Above all else, she is eminently qualified and will be a stalwart protector of our democratic institutions at a time when we need it the most. Her experience as a public defender will bring a perspective to the court that will benefit every person in the United States. And as the first Black woman to serve on the Supreme Court, Judge Jackson's confirmation will be a powerful reflection of the diversity of our country."

"The nomination of Judge Ketanji Brown Jackson to the U.S. Supreme Court is historic — not just because, if confirmed, she will be the first Black woman to serve on the court but because she is also the first former public defender to be nominated for this role," Johns stated.

"Make no mistake, Judge Jackson's lived and professional experience make her uniquely qualified for the Supreme Court, and her role in bringing equity to sentencing is an important skill set currently missing from the Supreme Court," he added. "Jackson's handling of cases during her time as a public defender showed she won real victories that advanced racial justice and equal treatment under the law in our criminal legal system."

"Lambda Legal's preliminary review of Judge Jackson's record gives us significant comfort that she can be trusted to administer the fair and impartial justice the country needs," Jennings stated. "We urge the Senate Judiciary Committee to act thoroughly and promptly in fulfilling their constitutional duty to consider President Biden's nominee. All of us deserve and must insist upon a Supreme Court whose members are committed to upholding the Constitution, including its sacred guarantees of liberty, equality, and justice for all."


The Bay Area Reporter contributed to this article.