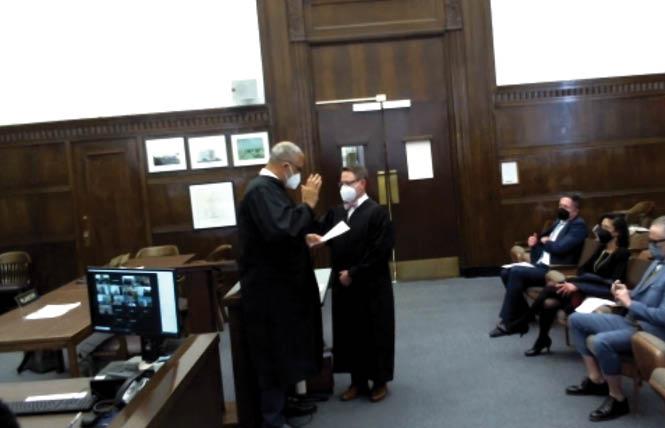 With the swearing in of Borkon, a gay man, the East Bay county now has 10 LGBTQ people serving on the bench, the largest of any in Northern California.

Presiding Judge Charles Smiley administered the oath of office after Borkon's husband, Kristofer Konietzko, enrobed him in the plain black garment that is required. It is "unadorned," Smiley explained, because it signifies exercising judicial authority and should be somber.

During his brief remarks, Borkon, 50, thanked Newsom, judicial appointments secretary Luis Céspedes, his husband, family, friends, colleagues, and mentors. He noted his path to becoming a judge took some time. As the Bay Area Reporter previously noted, Borkon had first applied for a judicial appointment with former governor Jerry Brown and reapplied with Newsom's administration in December 2019.

"Twenty-four years ago I moved to the Bay Area from a small town of 7,000 people," Borkon said.

He said that his grandfather instilled the principles that guide him. Those were "what did you learn today and how did you leave the world a better place?" Borkon said. The questions instilled the values of curiosity and looking out for others, he explained.

A graduate of Southern Illinois University Law School, Borkon first arrived in the Bay Area in 1998 after being hired as a civil research attorney at the 9th U.S. Circuit Court of Appeals. A year later he became a senior motions attorney for the federal appellate court.

In 2001, he became a principal at law firm Cotchett, Pitre, Simon & McCarthy. He joined Schubert & Reed LLP as an associate in 2005 and, two years later, became a partner and associate at Hagens Berman Sobol Shapiro LLP in Berkeley. In 2019, Borkon, who resides in San Francisco, became a partner at the Oakland office of Bleichmar Fonti & Auld LLP.

In the 2000s he co-chaired the Bay Area Lawyers for Individual Freedom's Judicial Nominations and Endorsements Committee. After applying to be a judge himself, Borkon found himself being interviewed by the LGBTQ bar association about his having the temperament to serve as a jurist.

Borkon is the second former board member of the AIDS Legal Referral Panel to be named to the Alameda court, as Brown had appointed Jenna M. Whitman, a lesbian, to it in 2018.

Having to leave his law firm and curtail his philanthropic work by becoming a judge is "bittersweet," Borkon told the B.A.R. in a phone interview last year after his appointment was announced. He sat on the board of the San Francisco AIDS Foundation and, in January, was able to help select the nonprofit's new CEO, Tyler TerMeer, Ph.D., who started in the post February 14.

Smiley said that Borkon will be assigned to the Hayward Hall of Justice.

Borkon said that many people helped him on his path to becoming a judge.

"I pushed ... because of the community of people who cared for me," he said. "Thank you for the opportunity."

Evans sworn in as Alameda County judge
Sign up!