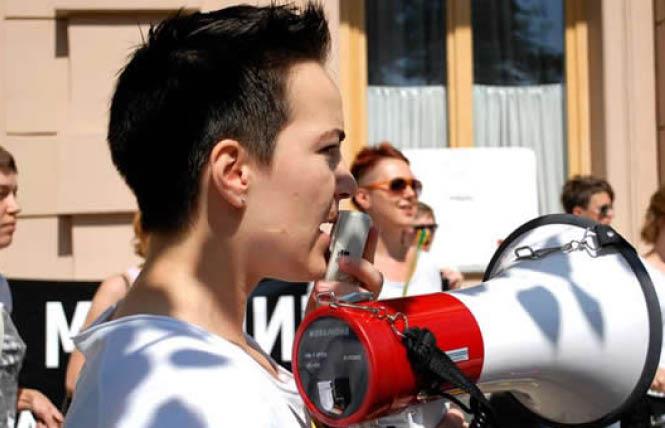 LGBTQ activists in Ukraine are strongly condemning Russia's invasion of their country.

Kyiv Pride in a tweet urged its supporters around the world to "call on your governments to stand up and to take action against the war in Ukraine."

"We need to stop it now, we need to show how powerful we are all together, and Putin will stand no chance," wrote Kyiv Pride.

To all our supporters in the world: Call on your governments to stand up and to take action against the war in Ukraine! We need to stop it now, we need to show how powerful we are all together, and Putin will stand no chance!— KyivPride (@KyivPride) February 24, 2022

"We have left the past to which (Putin) seeks to draw us far behind," wrote Kyiv Pride. "We are a country that has chosen the values of human rights, humanity, life and personality. Putin lives in the past."

Activists in Kyiv, the Ukrainian capital, with whom the Washington Blade spoke after the invasion began, said they are scared.

Helen Globa, co-founder of Tergo, a support group for parents and friends of LGBTQ Ukrainians, said she saw "clouds of black smoke" and heard "bombs exploding" and the "sounds of planes."

"It's bombing all around," said Shevchenko from Kyiv. "We hear explosions."

Ruslana Panukhnyk, a Kyiv-based LGBTQ activist, told the Blade that she is now in the capital's suburbs because "there were a lot of explosions this morning."

"As of now everything is silent near the place I am staying, but my friends in the city are noticing some blast sounds and planes flying over the city," said Panukhnyk. "We are closely following the situation and it looks like Russian troops are invading from all directions, except the Western one."

Shevchenko sent to the Blade a video from Kharkiv, Ukraine's second-largest city that is less than 30 miles from the Russian border in the eastern part of the country, that appears to show a Russian airstrike. Shevchenko also provided pictures of damaged buildings in Mariupol, a port city that is near the self-proclaimed Donetsk People's Republic that Russia has now recognized as an independent country.

Sphere, a Kharkiv-based LGBTQ rights group, in a February 23 post to its Facebook page said the "escalation of Russian aggression in eastern Ukraine currently has an unprecedented impact on vulnerable groups, including the LGBT+ community." Nash Mir, another Ukrainian advocacy organization, also has offices in Kharkiv, Odessa, and other cities across the country.

"As we have written, this war is not about dividing the spheres of influence," said Nash Mir in a statement it posted to its Facebook page on Thursday. "This war is a war of civilizations. The Free World opposes the Russian world, freedom and democracy oppose its traditional values."

"Propaganda and protection of these 'traditional values,' among which homophobia occupies an honorable place, is a direct aid to the Russian world," stressed Nash Mir. "This is the ideological justification of the Russian aggression. This is a direct assistance to our mortal enemy."

"This is the time for Ukrainian advocates of these values to decide on which side they are," it added.

Advocacy groups outside of Ukraine have also condemned the invasion.

"We stand with the brave people of Ukraine," tweeted Tbilisi Pride in Georgia.

"Like everyone, we woke this morning with shock and regret to hear of the invasion of Ukraine," it said. "We will play our part to support and stand with everyone in Ukraine, Russia and the entire region who works towards peace and democracy, and to support those who are made even more vulnerable."

Like everyone, we woke this morning with shock & regret to hear of the invasion of Ukraine. We will play our part to support & stand with everyone in Ukraine, Russia and the entire region who works towards peace & democracy, and to support those who are made even more vulnerable pic.twitter.com/ypdBkj8Erv— ILGA-Europe (@ILGAEurope) February 24, 2022

Rainbow Railroad, a Canada-based organization that assists LGBTQ refugees around the world, said it is "alarmed by the attack on Ukraine and are concerned about the impact this conflict will have on Ukraine's LGBTQI+ community."

"We are preparing, in consultation with our partners, possible ways we can help people at risk in the region," a Rainbow Railroad spokesperson stated February 24.

Rainbow Railroad is alarmed by the attack on Ukraine and are concerned about the impact this conflict will have on Ukraine's LGBTQI+ community. We are preparing, in consultation with our partners, possible ways we can help people at risk in the region.https://t.co/vLW7nSdTaz— Rainbow Railroad (@RainbowRailroad) February 24, 2022

The U.S.-based LGBTQ Victory Institute called on the Biden administration and its allies to ensure "the unique vulnerabilities of Ukrainian LGBTQ leaders and civil society" are part of all their diplomatic talks and negotiations with their Russian counterparts.

"Their safety must be paramount. The future of Ukrainian democracy depends on it," stated Annise Parker, the institute's president and CEO.

It expressed deep concern about Russia reportedly having a "kill list" targeting Ukrainian opposition leaders, which raises particular alarm about "the safety and well-being of the most outspoken LGBTQ political leaders and activists in Ukraine. We fear they will face the worst consequences for their bravery and open political participation, much as their Russian counterparts have."

Ukraine's LGBTQ community, Parker noted, "has struggled to gain acceptance and political inclusion for generations. With recent shifts in public opinion, however, there have been clear glimmers of hope. The Russian government, on the other hand, continues to promote bigoted, anti-LGBTQ policies designed to extinguish LGBTQ people from politics and society."

"Our hearts go out to the citizens of Ukraine, who simply desire to lead a life led by the principles of democracy and self-determination apart from the totalitarian regime in Russia. Due to the feckless and weak leadership exhibited by the Biden-Harris Administration and a compromised position of some of our key allies in Europe, the world stands by to watch in horror, in this modern age, as a nation is overrun by its former overlords," stated Moran. "For the second time in the last seven months, LGBTQ individuals will potentially be subject to extreme persecution as a result of a new occupying force. Ukraine has marked achievements in freedom and equality for its gay and lesbian citizens, especially compared to many other former Soviet satellites, and the harsh oppression of our LGBTQ brothers and sisters in Putin's Russia could soon cast its shadow in Ukraine."

LGBTQs were among hundreds of people who took part in a pro-Ukraine rally in San Francisco's Civic Center February 24.

Leo Volobrynskyy, a gay Ukrainian man, participated. He wrote in a Facebook post that he hasn't heard from some loved ones in the country.

"I am here in complete solidarity with Ukraine and our Bay Area Ukrainian community. We're going to stand up to this bully, this fascist dictator," he said, referring to Putin.

Wiener, who is Jewish, said that part of his family is from Ukraine, Belarus, and other Eastern European countries.

"They fled to this country over 100 years ago because of oppression," he said. "Had they stayed I wouldn't be here today. We would have been wiped out during World War II because another fascist dictator leader was appeased and allowed to do what he wanted to do.

"We can't let that happen ever again," Wiener said.

Stars in the House to host 10-hour star-filled marathon Ukraine benefit
Sign up!