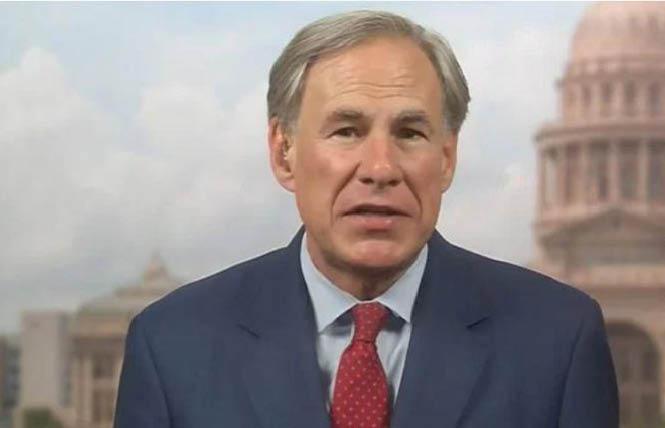 In a letter to the Department of Family and Protective Services, Abbott cited Paxton's opinion, writing, "A number of so-called 'sex change' procedures constitute child abuse under existing Texas law." He added that because the DFPS is "responsible for protecting children from abuse, I hereby direct your agency to conduct a prompt and thorough investigation of any reported instances of these abusive procedures in the state of Texas."

Abbott targeted a "wide variety of elective procedures" in his letter, including gender-affirming surgery and reversible puberty blockers.

"Texas law imposes reporting requirements upon all licensed professionals who have direct contact with children who may be subject to such abuse, including doctors, nurses, and teachers, and provides criminal penalties for failure to report such child abuse," Abbott wrote.

It is unclear what the immediate effect of the order will have on trans and nonbinary children in the state, but LGBTQ+ advocates warn it could be devastating.

A spokesperson for the DFPS told the Dallas Morning News that it will "follow Texas law as explained [by Paxton's opinion]," adding that "there are no pending investigations of child abuse involving the procedures described in that opinion."

However, Christian Menefee — a county attorney who represents the DFPS in civil child abuse cases in Harris County, Texas — wrote in a tweet that his "office won't be participating in this political game."

"We'll continue to follow the laws on the book," he added, not Paxton's "politically motivated and legally wrong 'opinion.'"

Menefee serves as the elected, top civil lawyer for Texas' largest county, Harris County where Houston is located, leading an office of 250 attorneys and staff members.

Abbott copied several other Texas agencies in his letter, including the state's Health and Human Services Commission, Medical Board, and Juvenile Justice Department.

But a leading trans health organization condemned that equation.

"Targeting trans youth, their parents, and their health care providers for political gain is unconscionable. We strongly denounce this alarmist and misguided opinion, which could obstruct access to medically necessary care," Dr. Walter Bouman, Ph.D., president of the World Professional Association for Transgender Health, told the Blade in an emailed statement.

"Please try to understand what it means to be the parent of a transgender child, please imagine the tears throughout the family as your child told you their truth, their most difficult, essential and personal truth," she stated. "A truth unlike anything you had ever known. You had a choice, can and do I stand with my child? You made the choice to stand with you child, to give your child the best opportunity to be the best person they could be.

She added that while she is a trans woman, she never had the opportunity to be a trans child.

"Family comes first. It is not an idle statement," Middleton stated. "It is what we all know, when no matter what else is before us, if we have to choose, we choose family. If not in Texas, in Palm Springs we stand with transgender children and their families.

"I know all of the stories. I know all of the explanations. I have lived this life," she stated. "We are who we are. You cannot change a child into someone they are not. What you can do, and what this will do, is break their spirit."

Criticism from Texas to California
LGBTQ+ advocates in Texas were outraged over both Paxton's opinion and Abbott's letter, calling it "disinformation, being spread about transgender people and their health care."

"Since the beginning of the 2021 legislative session, anti-LGBTQ+ politicians, including the governor, lieutenant governor, and attorney general have sought to lay the groundwork to turn Texans against their LGBTQ+ neighbors through an onslaught of harmful legislation, inflammatory rhetoric and discredited legal opinions," Ricardo Martinez, CEO of Equality Texas, told the Blade in a statement. "They have found it politically advantageous to spread lies about and villainize LGBTQ+ people, especially transgender people, grossly mischaracterizing our lives to paint us as scary caricatures that need to be feared, all in service of securing their reelections."

In California, reaction to Abbott's letter was harsh. Lawmakers in the Golden State, as well as officials in San Francisco and Santa Cruz counties, had banned tax-payer funded travel to Texas in 2017 due to anti-LGBTQ legislation Lone Star State lawmakers had enacted.

"This attack on trans children is disgusting and will endanger the physical and mental health of trans kids," Breed said.

"This despicable move by Governor Abbott criminalizes parents for supporting their trans children and threatens to tear trans kids away from their parents," he stated. "It will lead to even more trans kids committing suicide. I simply cannot comprehend the obsession of right-wing politicians with attacking trans kids and trying to destroy their lives. California will continue to stand strong for trans children and for all LGBTQ people."

"We are disgusted by Governor Abbott's attack on families and by his strong-arm tactics, which are more appropriate to a dictatorship than to a democracy," stated Asaf Orr, director of NCLR's Transgender Youth Project. "These families and their children are part of our communities, and they deserve support, not government surveillance. Parents have a right to seek the best medical care for their children, and parents — not the government — know best what is right for their own families."

Shannon Minter, a trans man who is NCLR's longtime legal director, tweeted that trans kids and their parents in Texas can contact the agency's helpline or email him.

Texas trans kids & parents, if you are worried about Governor Abbott's attack on our families, you can call our legal helpline or email me at sminter@nclrights.org or our Transgender Youth Project Director Asaf Orr at aorr@nclrights.org. https://t.co/6vWkjK8jJo— Shannon Minter (@shannonminter5) February 24, 2022

"Weaponizing the Texas Department of Family and Protective Services against parents who simply seek to allow their children to live their authentic lives is the state's latest — and most egregious — violation of the civil rights of transgender Texans," a release stated.

EQCA Executive Director Tony Hoang, a gay man, stated that Abbott is attempting to use children "as political pawns for his reelection campaign."

"That isn't just offensive; it's dangerous," he stated. "It's up to every single one of us to love, protect and empower trans youth — and hold those who attack them accountable. We will continue to stand with our partners at Transgender Education Network of Texas and Equality Texas and with trans people everywhere."

Abbott is up for reelection this year and is facing a spirited challenge from former congressmember Beto O'Rourke, who sought the 2020 Democratic presidential nomination before dropping out of the race. In a tweet, O'Rourke offered his support to trans kids. "To every trans kid in Texas — you're amazing. I'm proud of you," he wrote.

To every trans kid in Texas:

You're amazing. I'm proud of you.

You belong right here in Texas, and I'll fight for you to live freely as yourself and free from discrimination. pic.twitter.com/rLvxoOHS9F— Beto O'Rourke (@BetoORourke) February 23, 2022

Gay Assemblymember Evan Low (D-Campbell), chair of the LGBTQ caucus, stated, "Texas leaders need to focus on protecting those most vulnerable rather than targeting LGBTQ+ young people and their loving families."

Low authored Assembly Bill 1887 back in 2015 that banned state-funded travel to states that discriminate against LGBTQ people. Signed into law by former governor Jerry Brown, the restriction on travel covers government workers, academics, and college sports teams at public universities. Texas sued California in federal court last year over its no-fly list, but the U.S. Supreme Court tossed out the case last April.

Nearly 14,000 Texans between the ages of 13 and 17 identify as trans, according to the Williams Institute at UCLA School of Law.

Cynthia Laird from the Bay Area Reporter contributed to this article.


Updated, 2/25/22: This article has been updated with comments from Palm Springs Mayor Lisa Middleton.