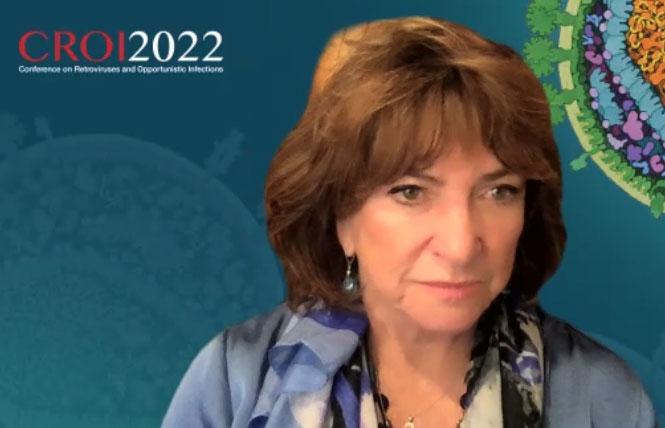 Dr. Yvonne Bryson of UCLA presented the case of a New York woman who appears to be cured of her HIV. Photo: Screenshot

A woman in New York City who has no detectable HIV after undergoing a new type of stem cell transplant may represent another rare cure, researchers reported February 15 at the annual Conference on Retroviruses and Opportunistic Infections.

The woman, who has leukemia, received a combination of umbilical cord blood cells with a rare mutation that blocks HIV entry and partially matched adult stem cells from a relative. She stopped antiretroviral therapy three years after the transplant, and 14 months later her viral load remains undetectable. But this procedure is risky and will not be feasible for most people living with HIV.

"This third case of an HIV cure post-bone marrow transplant from a donor naturally resistant to HIV, and the first in a woman living with HIV, is a very exciting finding," stated Dr. Sharon Lewin, president-elect of the International AIDS Society. "A bone marrow transplant is not a viable large-scale strategy for curing HIV, but it does present a proof of concept that HIV can be cured."

A special type of transplant
To date, only two people are widely regarded as cured of HIV. The first, former San Francisco resident Timothy Ray Brown (known as the Berlin Patient) received two stem cell transplants to treat leukemia in 2006. His doctor had the idea to use cells from a donor with a rare genetic mutation, dubbed CCR5-delta-32, that blocks HIV from using CCR5 receptors to enter T-cells. He underwent intensive chemotherapy and radiation to kill off his cancerous immune cells, allowing the donor stem cells to rebuild a new HIV-resistant immune system. But the donor immune cells attacked his body, resulting in near-fatal graft-versus-host disease.

Brown stopped antiretroviral treatment at the time of his first transplant, but his viral load did not rebound. Researchers extensively tested his blood, gut, and other tissues, finding no evidence of functional HIV anywhere in his body. At the time of his death in September 2020, due to a recurrence of leukemia, Brown had been free of HIV for more than 13 years.

The second man, Adam Castillejo (known as the London Patient), received a stem cell transplant to treat lymphoma from a donor with the CCR5-delta-32 mutation, but he underwent less aggressive chemotherapy and had milder graft-versus-host disease. A year and a half after the transplant, with no evidence of viable HIV, he stopped antiretroviral therapy in September 2017. He has now been HIV-free for more than four years.

The new case involves a middle-aged, multiracial woman who was diagnosed with HIV in 2013 and leukemia in 2017. She participated in a study that uses pre-screened umbilical cord blood with the CCR5-delta-32 mutation. This mutation is present in only around 1% of people of northern European descent and is even rarer in other populations. Being of mixed race, her chances of finding an adult donor who was both a close genetic match and carried the mutation were slim.

Cord blood does not require such an exact genetic match, but stored cord blood samples are too small for an adult transplant and these stem cells take longer to establish themselves in the body. So doctors at Weill Cornell Medical Center in New York performed a so-called haplo-cord transplant using both CCR5-delta-32 cord blood cells and partially matched adult donor stem cells without the mutation.

Like Brown, the woman received intensive chemotherapy and radiation before the transplant, but she did not develop graft-versus-host disease. Within 100 days, her entire immune system was made up of CCR5-delta-32 immune cells derived from the cord blood. "She basically had a new HIV-resistant immune system," said Dr. Yvonne Bryson of UCLA who presented the case.

For three years after the transplant, the woman remained on antiretroviral therapy with undetectable HIV using the most sensitive tests. At that point, she elected to try a closely monitored treatment interruption. Fourteen months later, she has not experienced viral rebound, has no functional HIV in nearly 75 million tested T-cells, has become HIV antibody negative and her leukemia remains in remission.

"I was struck by how easily this cure evolved," HIV cure expert Dr. Steven Deeks of UCSF told the Bay Area Reporter. "Because of some magical properties in cord blood, the risk of serious complications was reduced. Within months, a new immune system that was resistant to HIV was built relatively safely, at least as compared to a typical transplant setting."

Clues to a cure
Researchers are still unsure why these three people were apparently cured after stem cell transplants while other attempts have failed. Using stem cells from donors with the CCR5-delta-32 mutation seems to be a key to success. Researchers previously reported that two HIV-positive men who received stem cell transplants from donors without the mutation had delayed viral rebound after stopping antiretrovirals, but ultimately their HIV came back within a year. Some experts have suggested the graft-versus-host reaction might help keep HIV under control, but the New York woman did not experience this.

Even if the mystery is solved, stem cell transplants are too dangerous for people who do not need them to treat life-threatening cancer. What's more, the procedure is medically intensive and costly, and it would not be scalable to treat the millions of people living with HIV worldwide. Bryson estimated that only around 50 people with HIV might benefit from this approach in the United States. But the new case provides further clues that could lead to a more widely applicable strategy for a cure.

"Will this ever be done outside of a cancer setting? I am dubious. Will this become standard-of-care for people who have HIV and certain types of cancers? Perhaps, but this will remain a very rare situation," Deeks said. "Does this provide a roadmap for a more scalable cure? This is the real advance. These cases suggest that if we can edit out CCR5 from T-cells we can cure people. Given the advances in gene editing, this might be a reality one day. There is a massive investment planned to help advance this area of HIV medicine."