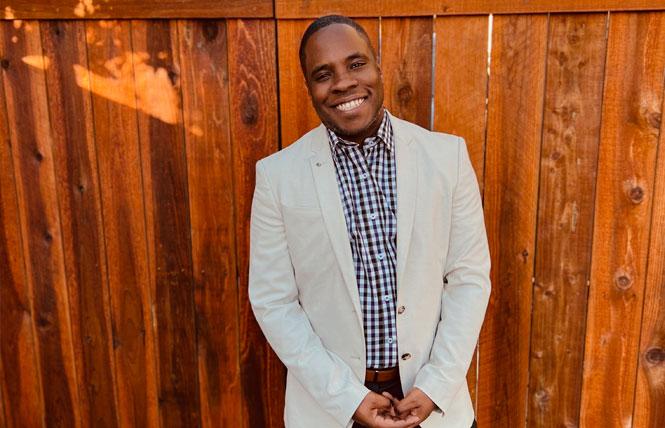 South Los Angeles resident Jamaal Gulledge is aiming to be California's first gay Black state senator. But the first-time candidate faces an uphill climb in raising enough money to get his name and message out to voters.

Gulledge is seeking the open 28th Senate District seat that represents West and South Los Angeles as well as Culver City, Mar Vista, Palms, and Ladera Heights. In a recent phone interview with the Bay Area Reporter, he said he had raised less than $7,000 for his campaign.

Gulledge, 36 and a human resources manager at UCLA, has attracted little support, so far, among Democratic leaders and LGBTQ groups in terms of endorsements. He said he has contacted more than 30 groups about receiving their support in the race.

"It has been a challenge raising money," he acknowledged. "I am reaching out to consultants to help me boost my fundraising."

Working in his favor, however, is that no local elected leaders have entered the race to date, a rather rare situation considering open legislative seats usually attract interest from those on city councils or county boards of supervisors looking to advance to higher office. Of those running, no candidate secured a pre-endorsement in mid-February from the Democratic Party ahead of its convention.

Plus, one contender for the seat, Patrick MacFarlane, announced last week he had decided to end his campaign. That leaves attorney Cheryl Turner as the only other Democratic candidate with any web presence for her candidacy.

Turner twice lost bids last year for an open Assembly and Senate seat, and came up short in 2018 for a seat on a statewide tax board. A third Democrat who has expressed interest in representing the heavily Democratic district, Lola Smallwood-Cuevas, does not appear to have a campaign website or social media presence.

Told of MacFarlane's decision by the B.A.R., Gulledge wrote in an emailed reply, "I'm still feeling pretty strong about my chances." While Turner "seems to run for everything," added Gulledge, he wouldn't "underestimate her given she has some name recognition. I'm still pushing through!"

Should he be elected Gulledge would be the first out LGBTQ Black man to serve in the Legislature. Joining him as the first LGBTQ Black female state legislator could be gay nurse and union leader Jennifer Esteen if she is elected to the open 20th Assembly District seat in the East Bay.

Another out Black woman, Shanta "Shay" Franco-Clausen, opted not to enter the race to succeed Assemblymember Bill Quirk (D-Hayward). He decided against running for a final two-year term this year and has endorsed labor leader Liz Ortega-Toro, who is straight, in the Alameda County contest.

LGBTQ statewide advocacy group Equality California recently co-endorsed Esteen and gay Dublin City Councilmember Shawn Kumagai, who would be the first LGBTQ person of Japanese descent elected to the state Legislature. EQCA has yet to endorse in the race for the 28th Senate District seat.

Either Menjivar or the younger Hertzberg appears set to become the first out state legislator from the San Fernando Valley. The winner of their race will also return LGBTQ representation from Los Angeles County to the state Senate since Ricardo Lara left in 2018 to become the state's insurance commissioner.

Gulledge aims to double out representation in the Legislature's upper chamber from the Los Angeles area. He is hopeful EQCA will support his bid to break through another pink glass ceiling in California politics.

"It is beyond time," Gulledge said of seeing an out Black person elected to serve in the statehouse. "I think that the history-making aspect of my campaign is particularly important in the political climate we face right now with Florida's 'Don't say gay' bill."

Even though he is not running in the Sunshine State, where lawmakers appear set to ban any reference to LGBTQ people in school classrooms and flirted with requiring educators to out students to their parents, Gulledge said his becoming an elected official could inspire LGBTQ youth fighting for their rights in myriad states across the country. He would make addressing the needs of LGBTQ youth a top priority as a state lawmaker.

"It sets an example for the younger generation that they can be who they are without fear," he said, "and it can represent to folks that being a diverse candidate or an LGBT candidate doesn't limit their ability to succeed in politics."

"It does make it easier not challenging an incumbent," said Gulledge. "I have always wanted to have some impact or influence on policy."

A native of Portland, Oregon, Gulledge first moved to Southern California in 2008 following the death of his mother, at the age of 55, after a battle with ovarian cancer. A supporter of then candidate Barack Obama, she passed away in September without seeing him be elected the country's first Black president.

"She was heavily involved in the political process," recalled Gulledge, who returned to Portland in 2017 to deal with a family matter then returned the following year to the Golden State. "She did stress the importance of voting and how our ancestors died for our ability to vote."

He came out to his family after the death of his mother, whom he also never spoke to about running for office one day. As a "helicopter mom" she would have been one of his biggest supporters, said Gulledge, and heavily involved in his Senate campaign.

"I feel like she would be like a press secretary almost; she was great at grammar," said Gulledge, who has been in his current South Los Angeles home for about a year.

His mother's family was one of only a few Black families living in Portland when she was a child. She stressed not only the importance of being engaged politically, recalled Gulledge, but also to be educated.

He had three half-siblings but lost his older brother, who was homeless and an alcoholic, last July at the age of 44. He isn't close with his other brother but is with a sister who lives in the state of Washington.

His relatives' medical issues are why Gulledge supports seeing California establish universal health care. It is among the main priorities he would work for as a senator.

"There is a push for a more progressive agenda and to be more bold when it comes to LGBTQ rights, and to be bolder as it comes to health care," said Gulledge of seeing young, left-leaning Democrats like himself run for office across California.

UPDATED 2/24/22 to clarify he only lost an older brother last summer and not an uncle and that he is the first man in his family to hold a graduate degree.