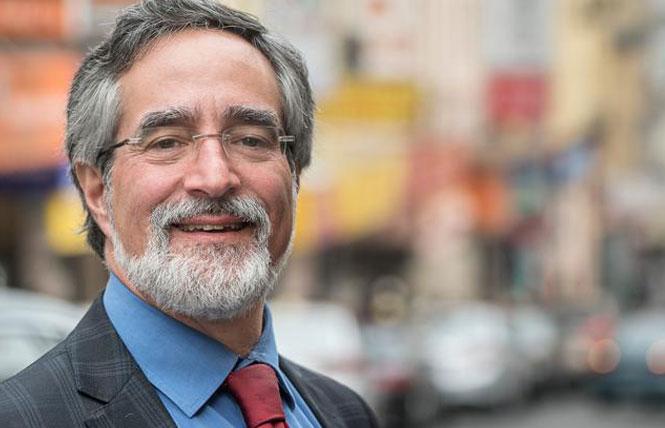 The San Francisco Board of Supervisors last week approved putting a charter amendment on the June ballot that would change the rules for the city recall elections. We think the proposal is undemocratic in principle, particularly because, in the event that an officeholder is recalled, the candidates appointed by the mayor would be prohibited from running for the seat themselves in the next election.

District 3 Supervisor Aaron Peskin came up with the proposed amendment. The supervisors voted 7-4 to place it on the ballot, with gay District 8 Supervisor Rafael Mandelman, and Supervisors Myrna Melgar, Ahsha Safaí, and Catherine Stefani in the dissent. It's clear that Peskin and the other supervisors who voted in favor resent Mayor London Breed's power to appoint people to vacant posts and this is Peskin's way of trying to do an end run to clip the mayor's feathers. His proposed charter amendment would limit the window when elected officials could be recalled, in addition to shutting out their replacement from the subsequent election for the seat.

The proposal applies to the assessor-recorder, city attorney, district attorney, public defender, sheriff, treasurer, school board, and City College of San Francisco board. Under it, recall petitions could not be initiated until 12 months after the official had assumed office (currently it is six) and would prohibit a recall if it were held within 12 months of a regularly scheduled election. If the charter amendment had been in place, last week's recall of three San Francisco Board of Education commissioners would not have happened; that's because the three school board members were up for reelection this November. The recall of District Attorney Chesa Boudin, also on the June ballot, would have qualified. Currently, in the event that an officeholder is recalled, the mayor selects a replacement who must run in the next scheduled election to retain the post. If Boudin is recalled and the charter amendment is adopted by voters, the mayor's appointee to the DA post would simply be a placeholder.

It's the second part of the proposed amendment that bothers us the most, however. Writing in the city charter who can and cannot seek elected office is undemocratic. It should be the voters who weigh in on these replacement candidates, as they will in November for the three candidates that the mayor appoints to the school board. (She will also be appointing a City College trustee as gay former trustee Tom Temprano vacated his seat this month to take the job of political director at Equality California.) In fact, mayoral appointees aren't always returned to office — just ask Peskin. After former District 3 supervisor David Chiu won the 17th Assembly District seat, the late Mayor Ed Lee in January 2015 appointed Julie Christensen to replace him as supervisor. She lost the following November to — you guessed it — Peskin, who successfully claimed his old seat back. Even Breed's appointees don't always win. Faauuga Moliga, whom Breed appointed to the school board before he won election in 2018, was among those recalled last week. Most famously, Breed's own appointment for DA, Suzy Loftus, didn't win in 2019.

In fact, the proposed charter amendment could have unintended consequences. Under it, the appointees have the potential to be stooges of the mayor — we can see the smoke-filled rooms now — rather than qualified candidates beholden to the electorate. And these "caretakers" — as Peskin called them — could indeed wreck havoc during their time in office. They would have zero motivation to perform well, in part because they wouldn't be able to run for the seat or be answerable to voters. These interim appointees have the potential to be ineffectual and waste time until the next election. Peskin seems to think that mayoral appointees now are under some obligation to the mayor when, in fact, they actually could be under his proposal.

During discussion on the topic last week, Melgar, who originally supported Peskin's proposal, citing the waste of money that the failed gubernatorial recall of Governor Gavin Newsom cost taxpayers, changed her mind and also brought up a good point. That is, mayoral appointees often reflect the diversity of the city, and preventing them from running for a full term might lead to less representation on these elected bodies. Peskin, too, tried to make the case that his proposal was about saving money. But it seems to us that the real reason he wants this charter amendment is to reduce mayoral power. We suspect that if there were a mayor in office who was more aligned with the progressives on the board, this proposed charter amendment wouldn't have even come up.

The San Francisco recalls qualified because groups of people got fed up — parents in the case of the school board, and those unhappy with Boudin's progressive policies in the case of the DA. In cases where elected officials are recalled, their replacements should have the right to seek the office — unfortunately, a majority of the Board of Supervisors doesn't see it that way.

Editorial: Biden still has much to do
Sign up!