Turnout will be key in SF Assembly runoff race 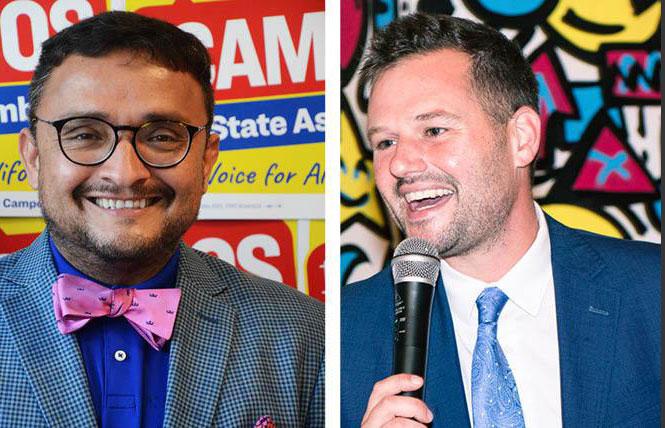 Without a recall or other election to help drive up voter interest, turnout is expected to be significantly lower for the April 19 runoff race for San Francisco's vacant 17th Assembly District seat. Even with ballots being mailed out to registered voters in the city's eastern neighborhoods, the race is likely to be decided by less than half of those eligible to vote.

According to the city's elections department, a little less than 35% of the 287,636 registered voters in the Assembly District cast ballots in the February 15 special election to fill the seat vacated by David Chiu, who in November became San Francisco's first Asian American city attorney. District 6 Supervisor Matt Haney took the top spot with 36.45% of those cast, for a total of 34,141 votes based on the unofficial returns.

Landing in second and advancing to the runoff was gay former District 9 supervisor David Campos. He received 33,404 votes, or 35.66% of those cast.

Turnout for the election was helped by the successful recall of three school board members on last week's ballot. Commissioner Faauuga Moliga stepped down last Wednesday, while Gabriela López, president of the school board, and Alison Collins have yet to follow suit.

In a phone interview with the Bay Area Reporter last week, Campos acknowledged it will be harder to drive people to the polls next month now that the fight over leadership of the city's public schools has moved from the ballot box to City Hall. (Mayor London Breed must now appoint three people to the vacant school board seats.)

"We have to understand the April electorate is going to be different," he said. "We had a lot of people motivated by the recall of the school board who may not come out in April."

Limited in funding partly due to his self-imposed restrictions on the contributions he will accept, Campos vowed he would have the resources he needs to carry his campaign into April. Endorsed by the B.A.R. and a slew of LGBTQ leaders and groups, Campos would be the city's first Latino legislator and return LGBTQ representation from San Francisco to the Legislature's lower chamber.

"I think what is key in a special election like this, and in April, is the ground game," said Campos, adding he was buoyed by the support he received from those casting ballots in person last Tuesday. "We won Election Day by almost 10%."

Haney did not respond to an interview request for this story. But he issued a statement last Thursday hailing his first-place finish and expressed confidence in his being elected to the state Legislature.

"I'm proud of the coalition we built and excited that we have momentum on our side going into the April election," stated Haney, endorsed by the San Francisco Examiner and assisted by labor unions that paid for TV ads in addition to the ones his own campaign aired.

Third place finisher Bilal Mahmood, a former Obama administration staffer, could play a spoiler role in the runoff should he elect to endorse either Haney or Campos. He received 20,872 votes, or 22.28% of those cast.

A day after last week's election Haney and Campos both reached out to Mahmood and fourth-place finisher Thea Selby, a City College of San Francisco trustee who received nearly 6% of the vote. While neither has yet to issue an endorsement in the runoff race, at least one group that had supported Mahmood is now backing Haney.

Over the weekend the pro-housing group SF YIMBY announced its members had decided to throw their support behind Haney in the runoff race. It has invited Haney to address its housing festival it is hosting at 1 p.m. Saturday, February 26, in Duboce Park.

As for Campos, he told the B.A.R. he is "still in talks" to see if statewide LGBTQ advocacy organization Equality California will now endorse in the race. It did not make an endorsement ahead of the February 15 election.

Looking at the vote counts from last week, Campos said, "The fact this is so close is a great sign our message of being corporate-free and being against the powers that be is really working."

SF Assembly candidates sound off on Tenderloin emergency
Sign up!