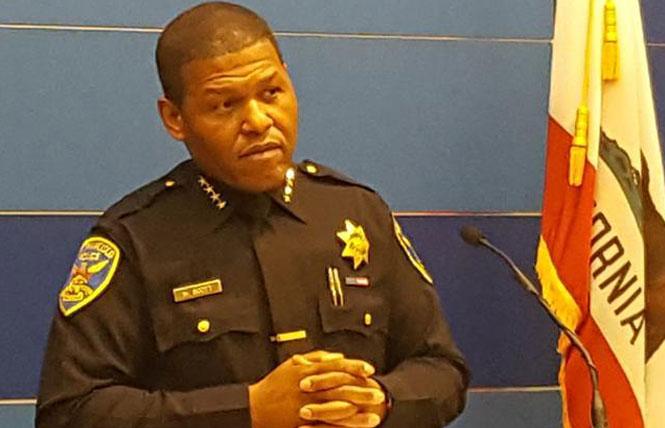 San Francisco Police Chief William Scott is hopeful legislation that decriminalizes loitering for adults with the intent to engage in sex work becomes law this year. While it passed out of the California Legislature in 2021, the bill has yet to be sent to Governor Gavin Newsom for him to either sign or veto.

The Los Angeles Times reported in January that the bill was being held at the request of Newsom's office. Its story raised questions about the impact of the bill on police's ability to crack down on sex trafficking pimps.

The Los Angeles County Sheriff's Department had opposed it last year, arguing it would hamper police investigations into prosecution. Of particular concern for the agency was its ability to arrest those soliciting sex workers on the street.

Asked about SB 357 in a wide-ranging interview with the Bay Area Reporter Friday, February 18, Scott said the governor should allow the change to the state's criminal code to become law. California would be following the state of New York, which repealed its loitering laws last February.

"Yes, I hope it gets signed because I think it is the right thing to do," said Scott when asked about the bill during the hourlong virtual discussion with the B.A.R. "It is forward-thinking and helps us do what we as a police department do; that is, help keep people safe and protect people from crimes."

Last October, Wiener told the B.A.R. he would likely send SB 357 to Newsom's desk in January. That did not happen and, in recent weeks, Wiener has repeatedly said the bill would "soon" be transmitted to the governor without giving an exact timeline.

The deadline for him to do so is August 31, though Wiener has pledged it will happen "well before" that date. In late January he had said it would be "at some point in the next few months."

Asked about Scott's comments about the bill, Wiener was once again vague on the timing for when the legislation would reach Newsom's desk.

"Chief Scott has always been a friend to the LGBTQ community, and I'm really thrilled to hear his support for this important legislation," said Wiener. "We haven't come up with exact timing, but it will be soon."

Scott told the B.A.R. that the San Francisco Police Department has long "led the way on some of the sex worker policies" aimed at fostering better relationships between the police and those engaged in sex work. He noted that several of its reforms have since made it into state legislation authored by Wiener, a former San Francisco supervisor.

Back in 2017, for instance, Scott issued a police department bulletin that clarified how officers should address a sex worker who is a victim or witness of a violent crime and/or who may be subject to arrest. It stated they were not to arrest "persons for involvement in sex work or other forms of sex trade when they are victims or witnesses" to various crimes.

Specifically, it said officers were not to arrest sex workers in such situations under California Penal Code section 653.22, which makes it a misdemeanor to loiter in a public place with the intent to commit prostitution. Wiener's bill, among its provisions, would repeal that section of the penal code.

Scott's bulletin also acknowledged "sex workers are vulnerable to violence and face barriers in reporting violent crimes to law enforcement in San Francisco." And it noted the police department and the city's district attorney's office had developed "complementary policies for persons of any age engaged in sex work and other forms of sex trade who experience or witness violent crimes."

The change in the law called for in SB 357 comes down to an issue of trust between sex workers and police officers, explained Scott, so they are not fearful of reporting crimes committed against them or those they witness while out on the streets.

"Sex workers are many times victims and get victimized of brutal crimes, robberies, sexual assaults, things like that," he said. "We heard as part of group discussions for us to put our sex worker policy in place that some don't feel they can come to the police because they are sex workers and can't report what is happening to them. That is a tragedy."

In the Legislature Wiener's bill faced opposition from a number of his Democratic colleagues in addition to Republican state legislators. As the B.A.R. first reported in January, nearly two-dozen Democratic legislators lost points on the annual scorecard produced by statewide LGBTQ advocacy organization Equality California for their not voting in support of SB 357.

EQCA has expressed its hope that Newsom will sign Wiener's bill. Should the governor end up vetoing it, his score on the organization's 2022 Legislative Scorecard would be impacted.

"Throughout his career Governor Newsom has been a champion and ally for the LGBTQ+ community, and we are certainly hopeful he will sign this important legislation to address profiling of the trans community and women of color in particular," Samuel Garrett-Pate, EQCA's managing director of external affairs, told the B.A.R. last month.