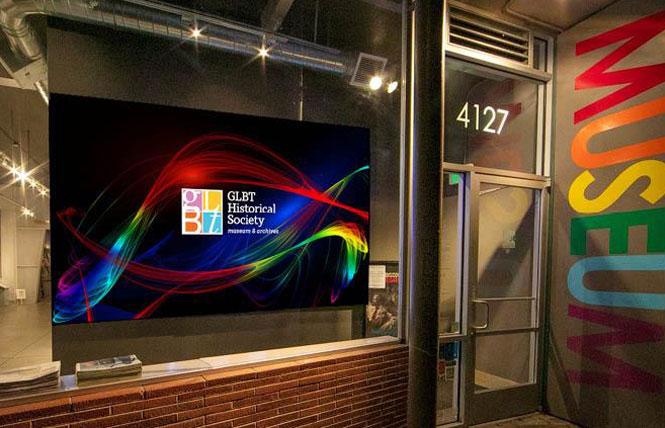 The GLBT Historical Society Museum in San Francisco's LGBTQ Castro district reopened this week after being closed for a month due to the Omicron surge of the COVID-19 pandemic.

According to a news release, the reopening also inaugurates a new schedule for the museum, which will now be Wednesdays through Sundays from 11 a.m. to 5 p.m. and closed on Mondays and Tuesdays.

Visitors to the museum, located at 4127 18th Street, can experience two exhibitions currently on display. The front gallery hosts "Performance, Protest, and Politics: The Art of Gilbert Baker." It uses textiles, costumes, photographs, and ephemera to paint a complex portrait of Baker (1951-2017), who co-created the rainbow flag. As the Bay Area Reporter has previously reported, Baker came up with a rainbow flag design that had eight colored stripes with the help of his friends Lynn Segerblom, who now lives in Southern California, and James McNamara, who died of AIDS-related complications in 1999. One version also sported a corner section of stars to mimic the design of the American flag.

The museum's main gallery hosts the historical society's long-term exhibition, "Queer Past Becomes Present," showcasing photos, documents, and artifacts telling the stories of over a century of everyday queer life among the diverse populations of San Francisco.

The release stated that ticket prices to the museum remain unchanged. General admission is $10; discounted admission is $6 for youth (ages 13-17); seniors (65 and over); students, teachers, active-duty military service members, and people with disabilities; GLBT Historical Society members; Supplemental Nutrition Assistance Program (SNAP) cardholders; and North American Reciprocal Museum members. Admission is free to all on the first Wednesday of the month, thanks to a grant from the Bob Ross Foundation.

Ticket reservations can be made online and walk-ins are welcome when the museum is below capacity. The release noted that COVID protocols, which include a vaccination requirement, are still in place. For more information on that, click here.

The program also aims to increase access to HIV testing for those disproportionately impacted by HIV, a news release stated. The program aims to distribute 850 tests in the first year.

State funding of $20,000 from the California Department of Public Health covers the costs of the test kits, the release stated. In addition, a new state law requires health plans to cover at-home test kits for HIV and other sexually transmitted diseases. That went into effect January 1.

"The most common STD symptom is no symptom at all, so getting tested is one of the most important things an individual can do for their health and the health of their partners," stated Dr. Sarah Rudman, the health department's STD/HIV controller and assistant health officer.

The health department stated that HIV home tests are safe and reliable, as they are for COVID-19.

Persons who live or work in the county, are 17 years of age or older, and identify as a member of a population highly impacted by HIV, such as men who have sex with men, LGBTQ+, Hispanic/Latinx, or African American/Black, are eligible to receive a self-test kit in the mail.

The health department also provides free HIV testing information This text will be the linkhere>.

Face to Face launches capital campaign for van
Face to Face, a nonprofit helping people living with HIV/AIDS in Sonoma County, has launched a fundraising campaign to raise $250,000 to purchase an electric vehicle mobile van that will travel throughout the county to deliver prevention and care services to underserved populations.

"With this van we will be able to perform rapid HIV testing; educate, initiate, and prescribe PrEP; and offer harm reduction services and care for people who cannot access our Face to Face office in Santa Rosa," an email announcement stated.

In addition to purchasing and retrofitting the van, the funds raised will pay for license and registration fees and insurance for two years. Beyond that, these costs will be paid for by fees for service, which are contracted by local, state, and federal government agencies, and from additional grants and gifts, the agency stated.

Agency officials noted that when the COVID-19 pandemic hit, Face to Face had to close the doors of its office but staff went to work going mobile. "This solidified the urgency identified in our strategic plan to go mobile, and knew we would be making the greatest impact with a dedicated mobile van," the agency stated.

To date, the agency has raised just over $61,000 for the van, according to its website. To donate, click here.

Attendees can learn about benefits and other resources. Representatives from the Veterans Administration and other community organizations are expected to be on hand.

Veterans who are homeless and bring verification (any official correspondence with their name on it, a VA health card, or your DD214) can receive a backpack full of hygiene essentials, a flyer stated. Additionally, haircuts will be given to vets on a limited basis — first come, first served. There will also be a grocery giveaway.

Irish Ayes 'Out In The World: Ireland's LGBTQ+ Diaspora'
Sign up!