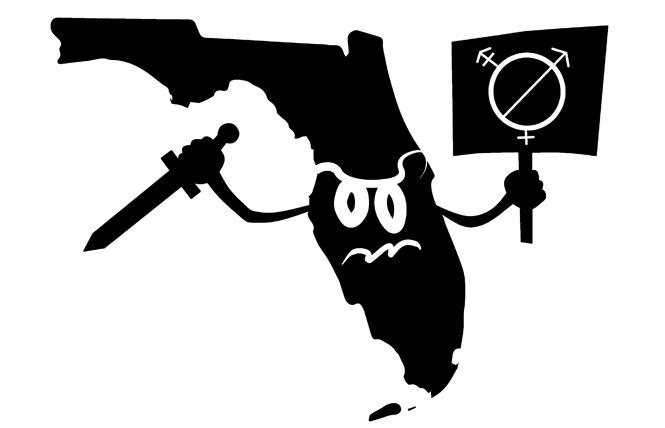 By the time you read this column, Florida's House of Representatives may have already voted on House Bill 1557/Senate Bill 1834. The legislation is officially called the Parental Rights in Education bill, but you might better know it as the "Don't Say Gay" bill.

Taking more than a few pages from the same organizers that brought the Briggs initiative to California in the 1970s (the failed ballot measure to ban LGBTQs from teaching in public schools), the bill would bar teachers from discussing LGBTQ issues or people in schools. It would extend to school support services, such as counselors.

As Human Rights Watch noted, "The bill would also require school personnel to notify parents of changes in a student's physical, mental, or emotional health. It would significantly limit the ability of counselors and teachers to be a confidential resource for students, including LGBT students who may not feel safe or comfortable asking questions about sexual orientation or gender identity to family members."

Let's also be clear: this won't just roll back protections for students, it will do real harm to LGBTQ students themselves. Unsurprisingly, Florida Governor Ron DeSantis (R), who seems to never shy away from bad legislation, has expressed his support for the bill.

While one of the worst out there, the Don't Say Gay bill isn't the only legislation aimed at LGBTQ protections: according to the American Civil Liberties Union, there are anti-LGBTQ bills in statehouses in more than half of the country. For most of them, the obvious — though not the only — target is transgender people.

Much like the Don't Say Gay bill targeting LGBTQ issues on public school campuses, the recent rash of book banning, fueled by bigoted outcries against critical race theory, have swept a number of LGBTQ titles into the mix. Critical race theory, as Education Week noted in an online explainer, is an academic concept that is more than 40 years old. The core idea is that race is a social construct, and that racism is not merely the product of individual bias or prejudice, but also something embedded in legal systems and policies.

Yet the biggest issue seems to be barring transgender people — predominately trans youth — from participating in sports. There are bills in 27 states against transgender athletes participating based on their gender identity.

Obviously, I'm opposed to this. I may not know what the best option is for a trans athlete, especially ones who are simply just children seeking to participate in sports with their peers, but these bans are not the answer.

There are also bills in 17 states seeking to halt or otherwise curtail trans health care for transgender youth. One of the worst of these in Alabama, SB 5, makes it a felony to treat trans minors. We're not talking surgery here: the bill would prevent hormonal treatments or even puberty blockers for trans kids.

If that's not bad enough, this bill — and others, such as SB 1046 in Arizona — would require school staff to out any such trans children to their parents or guardians.

There are bathroom bills. There are bills to prevent birth certificate changes. There are even bills that place a bounty on those who care for transgender people, in the same vein as Texas' anti-abortion bill, SB 8.

All of this legislation is designed to do one thing to transgender people: cause as much harm as possible. The goal, seemingly, is to completely eradicate transgender people by barring them from participation in society on multiple levels, as well as making it impossible for us to get necessary and vital care. It simply is not hyperbole to say that these people pushing such bills wish to see transgender people dead.

Far right groups wish to extend their bigotry — and their pocketbooks — especially after losing same-sex marriage battles. Conservative lawmakers want to provide some red meat to their bases, and they see transgender people as an easy target.

There is no appealing to their humanity, for they have long since decided that transgender people are not human. We have been framed as a "debate" or an "issue," and not flesh-and-blood. We are treated as a hypothetical: the creepy sex fiend prowling the bathroom, a theoretical cheater in athletics seeking to bend the rules in their favor, and the "groomer" seeking to recruit children into the "transgender lifestyle."

Yes, these tropes are ones the LGBTQ community should also recognize from the era of the Briggs initiative. It's the same disco-era rhetoric, reheated for a new generation who may never have heard of Anita Bryant, who crusaded against gay rights laws in Florida and elsewhere in the 1970s.

As angry as I may be about these bills, however, I am more frustrated by the lack of attention being paid to them. It wasn't that long ago that North Carolina passed HB 2, the hideous bathroom bill that led to boycotts and an eventual repeal after former governor Pat McCrory (R) lost to Roy Cooper (D) in a race largely fueled by sentiment against HB 2.

We may see some pushback over the Don't Say Gay bill, but all of these others are flying under the radar on the national stage. In this wave of hatred and animus, coverage is slim at best, and what there is often paints transgender people as unreasonable, as if we, too, should come to the table and negotiate over what rights we should be allowed to have.

This isn't "I like Coke, but you like Pepsi. We can compromise." This is "I think you should be dead, and you think you should live." There's no space for settlement. We cannot "reach across the aisle" when it is our very lives on the line. We may as well be asked if we would prefer a lethal injection or a firing squad, without any thought given to being able to just live our lives.

That's the common ground that I expect, and it's what the DeSantis' of the world seek to deny to me, to every transgender person, and to the whole LGBTQ community — among so many others.

That's the part I want you to remember: We are not asking for anything special here. We aren't demanding magical sparkle ponies, but simply the right to live our lives with the rights we expect: we expect to have our right to life, liberty, and the pursuit of happiness.

Gwen Smith would also like a magical sparkle pony, if they hand those out somewhere. You'll find her at www.gwensmith.com