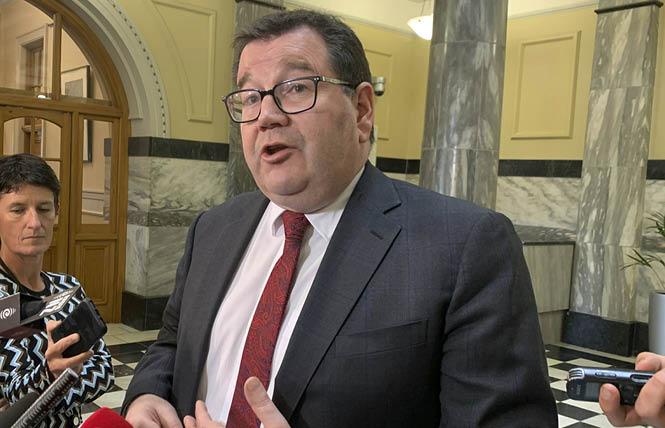 Israel and New Zealand are the latest countries to take significant steps toward banning conversion therapy for minors and adults.

Conversion therapy is the widely discredited practice of attempting to change a person's sexual orientation or gender identity. The practice has been debunked by the United Nations; World Health Organization; more than 60 counselors', psychologists', and medical associations globally; and human rights and LGBTQ rights organizations.

Anyone practicing conversion therapy on an individual under the age of 18, or a person with impaired decision-making capacity, could receive up to three years' imprisonment if convicted.

It would also be an offense to practice conversion therapy on anyone, regardless of age, where the practice caused "serious harm." Persons convicted under that statute could face up to five years in prison.

Gay Deputy Prime Minister Grant Robertson dedicated the legislation to his friend, whom he identified only as James, who he said wasn't received with the same love from his family that Robertson said he received when he came out. Instead, James met "anger, rejection, and derision," Robertson said, according to a report in the New Zealand Herald. James later died by suicide, Robertson said.

"We cannot bring you back, we cannot undo all the hurt, but we can make sure for the generations to come we provide the support and love you did not get and protect you from the harm of those who seek to try to stop you from being who you are," Robertson said.

Lesbian Kiri Allan, a fellow member of parliament and minister of conservation, expressed relief at the passage of the bill for future generations.

Allan tweeted she was subjected to conversion therapy when she was 16 years old, reported the Herald.

"I desperately tried to 'pray the gay' away - to be accepted by my family, community and church," she wrote in a tweet, adding, "My 'illness' and 'weakness' to temptation was etched as sin into my skin."

She wrote it took a long time for her to "shake that shame and trauma."

"Tonight our Parliament will ensure this practice is banned in our country for good," she wrote, thanking the activists and officials who "championed this change."

Robertson sent a clear message to the opposition that the bill's purpose was to ban the practice of conversion therapy, not undermine freedom of speech or worship, reported the Herald.

The attorney general needs to give consent to the two new criminal offenses, one for serious criminal offenses and the other for heightened risk of harm, in the bill. The bill also provides a pathway for civil redress.

The bill will go into effect in six months.

Hunt said, "This legislation sends an unequivocal message that conversion practices, which have destructive and sometimes fatal consequences, have no place in this country."

Minors are protected from conversion therapy in Mexico City. In the U.S., it is banned for minors in 20 states, including California and the territory of Puerto Rico, according to the Movement Advancement Project. According to MAP, Alabama, Florida, and Georgia have preliminary injunctions preventing the enforcement of conversion therapy bans.

Medical professionals received the notice from the ministry February 14 informing them if they practice conversion therapy — offer, publicize, or provide — they will face sanctions, including severe disciplinary proceedings or having their licenses revoked, reported the Jerusalem Post.

The ministry defined conversion therapy as "any therapy or consultation given in any way which has the goal of changing the gender identity or sexual identity of a person" and that a person's sexual orientation and gender identity "should not be seen as a medical or psychological issue requiring treatment."

The notice is the first step Israel has taken to ban the practice. The country has advised against conversion therapy for many years, but it had not been explicitly prohibited with sanctions before, except for psychologists, who previously could be punished for providing conversion therapy.

"This is a victory in the general struggle for tolerance and equality, but in my eyes, it is more basic and more critical because this is also a struggle for life itself, this is truly saving lives," Horowitz told the Post, describing the practice as "a cruel abuse of distressed youth" and "a murder of the psyche" and "sometimes the body."

"It is our duty to act against those who engage in it and endanger human lives. That's what we're doing today," Horowitz said.

Israel Gay Youth Director Ofer Neumann called the ministry's conversion therapy ban notice "a breakthrough that will save lives, families, and the futures of hundreds of young people in Israel," reported Haaretz.

Shay Bramson, chairman of Havruta, the religious Jewish LGBTQ organization in Israel, told the Post that thanks to the notice "we can exact justice from those who hurt us."

Felson called on the Knesset, Israel's parliament, to pass legislation to ban conversion therapy "completely" in the country.

According to the Times of Israel, in June 2020 a bill sponsored by then-opposition MK Horowitz banning conversion therapy under law passed its first reading in the Knesset, () infuriating Orthodox lawmakers. That legislation only sought to bar psychotherapists from performing conversion therapy and didn't forbid rabbis from continuing to perform it. It has yet to be signed into law, the paper reported.

Out in the World: East Africa's conversion therapy problem exposed
Sign up!