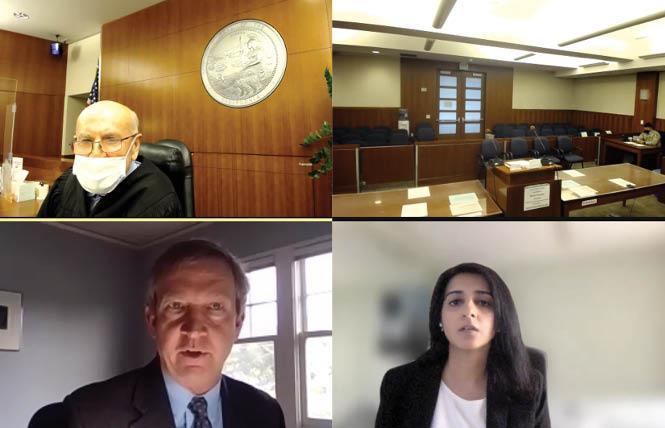 A San Francisco judge has sided with the city in a lawsuit alleging that the San Francisco Police Department illegally spied on protesters in Union Square.

As the Bay Area Reporter previously reported, both sides motioned for summary judgment in the case of Williams v. San Francisco and made their arguments on January 21 and February 1.

In the case, lawyers from the American Civil Liberties Union alleged that police conducted mass surveillance on the Black Lives Matter protests that erupted in late spring 2020 by commandeering private security cameras in the Union Square area.
The plaintiffs in the suit were protesting the murder of George Floyd by a Minneapolis police officer. They are lead plaintiff Hope Williams, a member of the Harvey Milk LGBTQ Democratic Club, Nathan Sheard, and Nestor Reyes.

Their attorneys argued that the use of the security cameras was illegal under a city ordinance passed by the Board of Supervisors in 2019 that requires any city department to obtain board approval prior to acquiring, using, or borrowing any surveillance technologies, except in "exigent circumstances."

In an unrelated case, the United States Supreme Court in 2013 defined exigent circumstances as being "a variety of circumstances [which] may give rise to an exigency sufficient to justify a warrantless search, including law enforcement's need to provide emergency assistance to an occupant of a home ...engage in 'hot pursuit' of a fleeing suspect ... or enter a burning building to put out a fire and investigate its cause."

The San Francisco ordinance states that in such circumstances a city agency must "cease using the surveillance technology within seven days, or when the exigent circumstances end, whichever is sooner."

It was undisputed that the Union Square Business Improvement District operates a surveillance camera network that was monitored by police May 31-June 7, 2020.

In his ruling, Ulmer stated that there is no textual support in the ordinance for the argument that the use has to be continuous.

"Plaintiffs say the terms 'using or possessing' require the police department to have used ... surveillance technology 'continuously,'" Ulmer wrote. "This argument finds no support in the ordinance's plain language or its legislative history. Nor can the ordinance be reasonably read to require existing surveillance technologies to have been 'incorporated into' department operations, as plaintiffs assert."

Ulmer added that "these are concepts the Board of Supervisors could have included in the ordinance had it so intended."

The B.A.R. contacted Williams and the police department for their reactions to the ruling. Both deferred to their attorneys.

Williams' attorney Sara Hussain stated that she's "disappointed by the court's ruling." She characterized the ruling as having been decided on a technicality.

"The question at the heart of our lawsuit is whether SFPD will be held accountable for refusing to submit to democratic controls on police surveillance," Hussain stated. "The police sidestepped the ordinance, and the court ruled on a technicality. We are considering our next steps, including filing an appeal. Rest assured, we will continue to fight for the right of every San Franciscan to march for racial justice without fear of police surveillance."

Jen Kwart, spokesperson for City Attorney David Chiu, said the city was pleased with the decision.

"We appreciate that the court evaluated this case based on the facts and the plain language of the city's ordinance," Kwart stated.