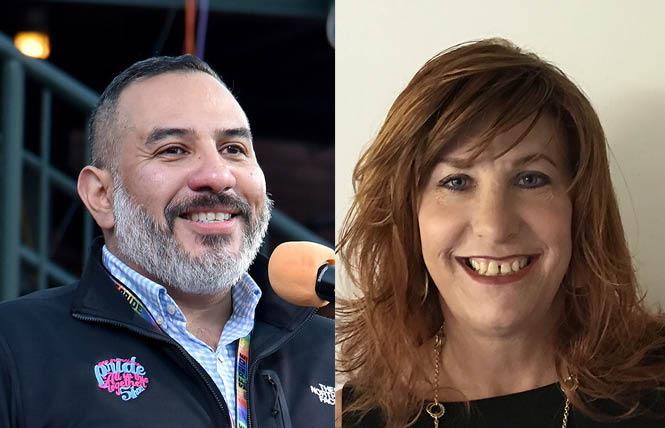 Big changes are afoot at San Francisco Pride with the sudden departure of its executive director, less than five months before the nonprofit plans to return to pre-COVID life with its annual in-person parade and festival.

Executive Director Fred Lopez is stepping down immediately from the position he's held for just over two years, according to a news release issued by SF Pride Thursday, February 17. He will be succeeded on an interim basis by SF Pride treasurer Suzanne Ford, a transgender woman who "has served on the board of directors since 2018 and has been on the executive committee as both the vice president and treasurer," the release stated.

Lopez, a gay man, was hired in January 2020 before the COVID-19 pandemic forced drastic changes to the annual celebration organized by SF Pride, including moving the typically massive event to a virtual version that year. In June 2021 the only official in-person Pride events were two movie nights at Oracle Park produced by Frameline as part of its annual San Francisco LGBTQ film festival that it held in partnership with Giants Enterprises and SF Pride.

"These events were the culmination of countless hours of work and dedication," Lopez wrote in an email to the Bay Area Reporter.

The city's traditional Pride parade and celebration festival were once again canceled last June because of the ongoing COVID pandemic. The global health crisis, now entering its third year, resulted in Lopez being the first SF Pride executive director who was not able to oversee an in-person parade.

"While the time I had at SF Pride was certainly challenging due to the pandemic, I am really proud of the work that our team did to continue to bring experiences to our communities," Lopez wrote in his email.

In the release, the board acknowledged the challenges the pandemic presented.

"Lopez's leadership during this challenging period included the launch of a successful virtual Pride celebration in 2020, renewed collaborations with longstanding partners for SF Pride's 50th anniversary, the broadening of SF Pride's programming to deliver content and produce events year-round, and more," the release stated.

Lopez stated that he was "grateful" for the experience.

"I am so grateful for all of the wonderful partnerships and friendships I was able to foster, and I appreciate the faith that the board of directors had in me," Lopez stated in the release. "I am excited for the next chapter of my career, and will be glad to see the many thousands of people back in the streets for Pride events in June and beyond."

Lopez announced on his Facebook page that he will return to working at the San Francisco Museum of Modern Art, where he had worked as an event manager from 2016 until being hired as SF Pride's executive director on a permanent basis two years ago. He had been named SF Pride's interim leader shortly after the 2019 celebration, having served as executive director of the Castro Street Fair since January 2014. According to SF Pride, he will be working in the director's office.

"I'll be working with the board of trustees, among other tasks, and I'm so excited to join them as they prepare to welcome the new museum director [Christopher Bedford]," he wrote on his Facebook page February 16, the day before SF Pride formally announced his departure.

"This of course means that I am ending my time at SF Pride," he continued. "It's been an indescribable feeling serving as the executive director of San Francisco Pride. I am honored to have guided this iconic organization through one of the most challenging times in its history. And even though none of it is remotely close to what I expected when I accepted the role, I learned so much. I am glad to have been a part of this great team, and I leave the team in competent hands."

Led by women
Ford's assumption of the interim executive director role marks the first time in years that SF Pride has been led by women at both the board and staff levels, the organization noted.

"It is truly a landmark year for the organization," Carolyn Wysinger, SF Pride board president, stated in the release. "Women have always played such an important role in our LGBTQ community. It is only fitting that the organization returns to Market Street with a leadership team that truly reflects our diverse community."

Ford wrote in a Facebook post that she is not the first trans executive director of SF Pride. She cited Tita Aida, also known as Nikki Calma, as serving in that role but Aida served as board co-chair, as have a number of other trans people over the years, as the B.A.R. has reported. Since Teddy Witherington was hired as SF Pride's first full-time executive director in 1997, the organization's paid executive directors have been cisgender.

Lopez praised Ford in his email to the B.A.R.

"Suzanne is a compassionate and thoughtful leader whom I have been honored to work with during her time on the board," he wrote, "and I wish her and the entire team success with the return to large-scale, in-person Pride celebrations."

According to the release, Ford, who lives in Novato, has been an integral part of SF Pride for a number of years. A longtime advocate for the trans and gender-nonconforming communities, she has served on the board of directors since 2018. Ford's previous service to the community includes a seat on the board of Trans Heartline and as board president of the Spahr Center, the LGBTQ and HIV/AIDS community center in Marin County.

Ford, 56, told the B.A.R. that she is "excited about this great opportunity in front of me."

"I am blessed to have a deep bench of board members, staff, community partners and contractors with long relationships with SF Pride," Ford wrote in an email to the B.A.R. "Obviously emerging from the pandemic presents new obstacles that will continue to arise as we move forward. Through Fred's leadership we have kept the organization intact. We now need the entire community to support us financially as we take back Market Street and give the LGBTQIA community the celebration it deserves!"

In the release, Ford stated that the SF Pride team is "already hard at work to present a Pride in 2022 that is familiar and we want to bring some new fresh perspectives as well."

"We appreciate Fred's leadership for the last two years," she added. "We understand that life presents opportunities and challenges whenever it wants to, and he was presented with a great opportunity. We wish him all of the success in the world."

The SF Pride board will embark on a search for a permanent executive director after this year's parade and celebration, according to the release.

The 52nd annual San Francisco LGBT Pride Celebration and Parade will be held the last weekend in June. This year's theme is "Love Will Keep Us Together." The parade is Sunday, June 26, in the heart of downtown San Francisco, beginning at 10:30 a.m. A two-day celebration and rally is scheduled from noon to 6 p.m. on Saturday, June 25, and from 11 a.m. to 6 p.m. on Sunday, June 26, at Civic Center Plaza and the surrounding neighborhood.