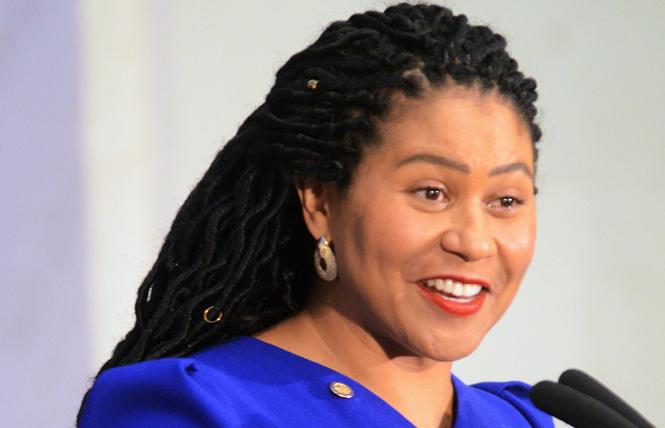 Mayor London Breed has a chance to transform public education; LGBTQ appointees should be part of her goal. Photo: Rick Gerharter

Following the resounding recall of three members of the San Francisco Board of Education, Mayor London Breed gets to select their replacements. The seats aren't expected to be officially vacated until sometime in late March, 10 days after the Board of Supervisors certifies and approves the election results.

While each of the new commissioners will need to seek election this November for full four-year terms, the mayor has a unique opportunity to further diversify the school board for the rest of this year. We urge her to pick an LGBTQ parent for at least one of the vacancies.

The school board presently has one gay member, Commissioner Mark Sanchez, and while he is a longtime educator, he is not a parent. Last year, as readers will recall, the school board commissioners made a mockery of diversity when they debated for two hours the fate of a white gay father, Seth Brenzel, to serve on the district's volunteer Parent Advisory Council. Without asking Brenzel a single question, such as why having an LGBTQ person on the PAC is important, the commissioners decided that they knew best and tabled the vote on Brenzel. Keep in mind that at the time, the PAC had no male members and no LGBTQ person on it. This is just one of the many decisions, or lack thereof, that the school board made that prompted the historic recall. (Proponents likely would have tried to recall all seven commissioners, but the three on Tuesday's ballot, Board President Gabriela López, and Commissioners Faauuga Moliga and Alison Collins, were the only ones who were eligible. The other four commissioners had just been elected or reelected and thus, could not yet face a recall.)

Having an LGBTQ parent on the school board is critical, and the school board has not had one since Tom Ammiano served in the early 1990s. He, of course, went on to serve on the Board of Supervisors and in the state Assembly. Lesbians on the board have included Angie Fa, Juanita Owens, and Heather Hiles. While all worked to make San Francisco's public schools safer and more welcoming for queer youth, an LGBTQ parent would bring a perspective that is missing from the school board now, particularly as all parents continue to grapple with the COVID-19 pandemic and the constantly changing rules amid the coronavirus variants. Remote learning has also significantly impacted students and faculty, in addition to parents, who have at times scrambled to help their children. Bringing an out voice to the board would help ensure that queer families in the school district are heard and have representation.

City College vacancy
The school board vacancies are not the only ones Breed must fill. There is also an opening on the City College of San Francisco Board of Trustees. Tom Temprano, a gay man who served on that board for five years, resigned Tuesday to become the new political director for Equality California. (He also resigned as an aide to gay District 8 Supervisor Rafael Mandelman.) One of two out trustees (the other is Shanell Williams, a bisexual woman), Temprano was a steady hand on the college board as it continues to confront low enrollment and financial issues made worse by the pandemic. City College provides many local residents, LGBTQs and immigrants, an opportunity to enroll in community college — it's an important stepping stone for many that also ensures we are nurturing our local labor force. Breed should appoint an LGBTQ person to Temprano's seat to ensure that the LGBTQ community continues to have robust representation on the college's governing body. The Harvey Milk LGBTQ Democratic Club expressed a similar view in a letter it plans to write to Breed. According to the club's website, it would also like to see a new trustee who "has a personal connection to the college." Moreover, the Milk club advocates that the mayor consult with City College students and educators on the appointee.

In a statement on the school board recall after early results were posted, Breed mentioned the challenges the district faces and said that the city is ready to offer support. "It's time we refocus our efforts on the basics of providing quality education for all students, while more broadly improving how this city delivers support for children and families," she stated.

Breed has a chance to transform public education at the local level, something that most mayors don't get to do. Rather than political appointees, the mayor should look for qualified candidates who support public schools and will be strong voices on these two oversight bodies. The school board will be looking for a new superintendent; both education boards need to get a grip on their district finances. The new commissioners and the new trustee must be able to quickly meet the challenges they face. We cannot overstate how critical it is that the LGBTQ community is part of that process through at least one commissioner for the school board and the replacement for Temprano at City College.