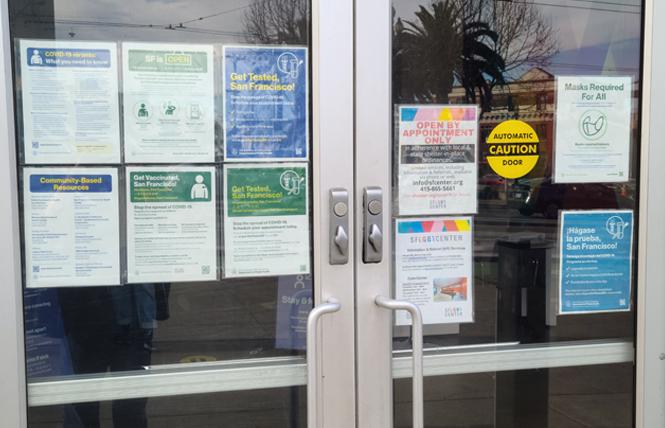 If everything felt a little more open, freer, on February 16, that might very well have been because California has loosened its COVID-inspired indoor mask mandate and eight of the nine Bay Area counties have followed suit. Of course, people have been here before.

For the first time since December 15, Californians in most parts of the state were allowed to go about their daily lives without having to mask up, in most situations. The state eased restrictions for vaccinated folks in bars, restaurants, and gyms but continues to require masking in the state's K-12 schools. That is expected to be reviewed at the end of the month, said California Health and Human Services Secretary Dr. Mark Ghaly at a news conference in Sacramento Monday, February 14.

While many parents around California are demanding the state drop its masking requirements for K-12 students, Sacramento isn't quite ready to go there. Despite insistence from critics that, if vaccinations are successful, masks aren't necessary, Ghaly insists the state must use "a collective approach" drawing upon a wide variety of methods to contain the virus. The masking requirement, Ghaly said, isn't the only factor in California's success in keeping its schools open during the pandemic.

However, for the state's businesses, it's now being left up to proprietors to determine whether they'll require masks on premises. They're still required to check vaccination status, or recent negative test results for the unvaccinated. Masking is still required," regardless of vaccination status, in public transportation, health care settings, congregate settings like correctional facilities and homeless shelters, long-term care facilities, and in K-12 schools and childcare settings," according to a statement from the San Francisco Department of Public Health. Masks are still required throughout San Francisco International Airport, as well as on trains, buses, and BART.

In San Francisco, all city facilities such as libraries, recreation centers, offices, and other service sites operated by the city, including City Hall, will continue to require masking regardless of vaccination status.

The Bay Area counties of Alameda, Contra Costa, Marin, Napa, San Francisco, San Mateo, Solano, Sonoma, and the city of Berkeley, as well as Monterey, San Benito, and Santa Cruz counties have all lifted universal mask requirements. Santa Clara County, the Bay Area's most populous, is still struggling with high infection rates and keeping its mask mandate in place. The South Bay county is recording 1,145 average cases per day as opposed to San Francisco County with 348 average cases per day, well below the state mandated maximum level of 550 cases.

How long this reprieve will last is anyone's guess. The federal Centers for Disease Control and Prevention are currently monitoring at least 10 variants although they don't believe they pose "a significant and imminent risk to public health in the United States."

In the Castro, reactions to the new guidelines were mixed.

"We're not exactly quite over this," said Tina Valentin Aguirre, manager of the Castro LGBTQ Cultural District, in a phone interview. "The surge is on the downward trajectory. People are still getting infected."

However, "on the community level, we're very excited that more people are going out and supporting businesses in the Castro and nightlife," said Aguirre, who identifies as a genderqueer Latinx person.

The Castro LGBTQ Cultural District has been offering weekly public COVID tests and vaccinations pretty regularly since last fall. Over 1,000 people utilized the service. Aguirre said they don't see discontinuing the service any time soon, and are funded through June. Beyond that, the tests "will continue until we determine people are no longer using the services."

A February 10 newsletter about the city's cultural districts from the Mayor's Office of Housing and Community Development had stated that the testing and vaccine hubs were likely to continue in March through the rest of winter but Aguirre said the district has pivoted to continuing the service.

Some Castro business leaders are nervous.

"We are concerned that the state and city are once again lifting the mandate too early," Terry Asten Bennett, a straight ally and manager of Cliff's Variety on Castro Street, wrote in an email. " We hope we are wrong."

Nonetheless, the venerable hardware store will allow customers without masks although employees will continue to sport them. The memory of the last time the city attempted to ease mask mandates remains a source of concern for Bennett.

"The last time the mask mandate was lifted we experienced a drop in foot traffic and an increase in curb-side pick-up requests," she stated. "This pandemic has proven that trying to forecast how business will react to the ever-changing situation is about as accurate as asking a Magic 8 Ball. In other words, I don't know what impact this is going to have on business, but we will continue to put one foot in front of the other and do our best to keep everyone safe."

At Fitness SF on upper Market Street, masks are now optional inside the gym as of Wednesday, according to an email it sent to members last week. It is still requiring people working out be vaccinated, but they do not need to have gotten a booster dose of the vaccine.

Across the street at MX3 Fitness, gay co-owner Dave Karraker was notably more enthusiastic about the mask policy change. Masks will not be required in his gym, he wrote in an email.

"Let's face it, no one wants to be doing lunges or downward dogs with a mask on," he stated, "so we are really pleased to see a move towards normalcy that will encourage folks to get back in the gym."

"We do think that the elimination of the mask mandate will not just be good for gyms in the Castro, but for all the businesses around them," Karraker stated. "Gyms create daily, consistent foot traffic for any neighborhood, so that benefits the dry cleaners, the taco joints, and the flower stores. Anything that can bring more people out of their houses (and off Amazon!) to support Castro small businesses is a good thing."

California OKs COVID vaccine boosters for all adults
Sign up!