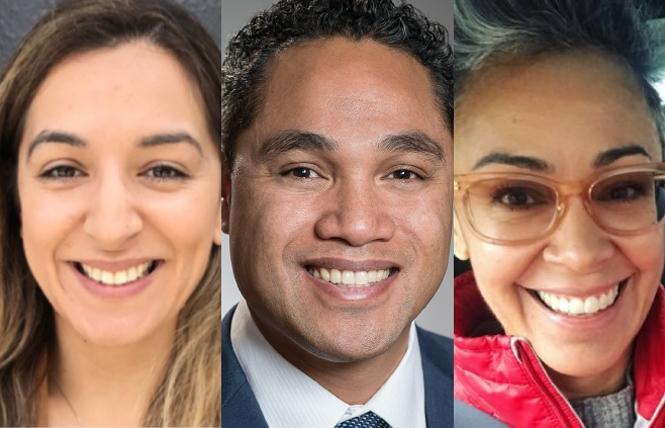 Voters recalled three members of the San Francisco school board, according to the early election results Tuesday. Meanwhile, the city's appointed assessor-recorder was easily elected to finish out his term.

San Francisco Board of Education President Gabriela López and Commissioners Faauuga Moliga and Alison Collins were ousted from the oversight body for the city's public schools. Mayor London Breed will name their replacements, and the new school board members will need to seek election in November.

The recall against Moliga was passing with 72% of the vote. Of the three, he had launched the strongest effort to maintain his seat on the school board.

He posted a gracious note on Twitter accepting his being unable to fend off the recall and maintain his school board seat. He said "it has truly been an honor" to have served on the elected body.


Within minutes of the first vote tallies being released Tuesday, gay state Senator Scott Wiener (D-San Francisco) hailed the recall of the three education leaders and pledged to work with the school district and to support funding for public education in the state budget.

"Today San Franciscans made a clear statement: We need a Board of Education focused like a laser on stabilizing our schools, keeping them open, and supporting students and families in the most effective possible way," stated Wiener, who had supported the effort. "I want to express my deepest gratitude to the grassroots network of parents and other San Franciscans who worked day and night to create accountability. Your efforts have completely shifted the political dynamic in our city. More people than ever are focused on what the Board of Education is doing and who is - and who should be - serving on the Board.

Wiener added, "With the recall now behind us, I look forward to the mayor making three strong appointments to the Board of Education and to all of us circling wagons around our school district to stabilize and strengthen it."

Breed also hailed the results of the recall, noting in her own statement that "the voters of this city have delivered a clear message that the school board must focus on the essentials of delivering a well-run school system above all else. San Francisco is a city that believes in the value of big ideas, but those ideas must be built on the foundation of a government that does the essentials well."

She also recognized "all the parents who tirelessly organized and advocated in the last year. Elections can be difficult, but these parents were fighting for what matters most - their children. The days ahead for our public schools will not be easy."

Wednesday Breed said she would be interviewing various candidates over the next month who are interested in being appointed to the school board and asking them numerous questions that parents have sent her centered on how they will address the needs of the city's public school students.

"This will be one of the hardest decisions I have ever had to make as it relates to appointments because of the significance of what this means and what the people of San Francisco expect in who I will appoint," said Breed, adding she didn't regret her appointment of Moliga to a school board vacancy amid his 2018 campaign for a seat.

Autumn Looijen and her partner Siva Raj, who is a bisexual parent, had launched the recall drive after being fed up with the school board's handling of the COVID-19 pandemic and its impact on schools and students. They tapped into parents' anger at seeing the city's public schools remain closed for much of 2020 and 2021 while private and parochial schools reopened.

"In this deeply divided city, in this deeply divided country, it shows that there are some things we can all agree on. Competent leadership. Good public schools. Protecting our most disadvantaged kids," stated Raj and Looijen the morning after the election. "Today we're celebrating that San Francisco is with us. Tomorrow the real work will begin."

A proposal to rename 44 schools in the district while they were closed brought national scorn and ridicule on the school board members. Many objected to the lack of public outreach around the renamings, including ones bearing the names of President Abraham Lincoln and U.S. Senator Dianne Feinstein (D-California), a former mayor and supervisor. Historians cried foul over the flimsy research an advisory committee cited for why the schools needed to be renamed.

The three school board members also drew the ire of many in the LGBTQ community with their rejection of gay dad Seth Brenzel to the district's volunteer Parent Advisory Council due to his being white and not a person of color when the body had no LGBTQ or male members. Collins' past tweets using racist language against Asians also fueled anger within the city's Asian American and Pacific Islander communities.

She further inflamed her critics and many local leaders by filing a baseless lawsuit against the school district and her board colleagues seeking $87 million after they removed her as vice president last year. It cost the district $110,000 in legal fees at a time when it faced a budget deficit of about $125 million.

State education officials threatened to take over control of the school district if it did not balance its budget. Other issues like the board's changing the admission policy for the district's most coveted high school and wanting to shroud a mural at a school site some consider racist also led to frustration with its leadership.

Local recall reform sought
A recall of San Francisco District Attorney Chesa Boudin will go before voters on the June 7 primary ballot. A majority of the Board of Supervisors, critical of the recalls for costing the city money to conduct and thwarting the will of voters, approved placing a charter amendment before voters on the June ballot that would revise how San Francisco allows recalls to be held.

It would extend the ban on the initiation of recall petitions from six to 12 months after the official has assumed office. It would also prohibit recalling an elected official within 12 months of their having to run for reelection in a regularly scheduled election for their office. All three of the school board members facing recall were elected in 2018, thus they would be up for reelection in November.

The charter amendment would also strip the mayor's power of appointing someone to fill a vacancy created by a recall election and could then seek election to the position. Instead, the mayor could only appoint a caretaker who would be barred from running for the elected post.

Assessor-Recorder Torres wins race
Less controversial of an election was Assessor-Recorder Joaquín Torres' bid to serve out the remainder of former assessor-recorder Carmen Chu's term through early January 2023. After Breed named Chu as the new city administrator, she appointed Torres as her successor.

No one filed to run against him on the ballot, though longtime gay activist Michael Petrelis won approval to be a write-in candidate. He dubbed his campaign WIMP: Write-In Michael Petrelis and received 53 votes, according to the early returns.

Torres easily won the race with 99.93% of the vote. He will need to run for a full four-year term in November.

Updated, 2/26/22: This article has been updated with comments from Mayor Breed.

SF mayor swears in 3 women to school board
Sign up!