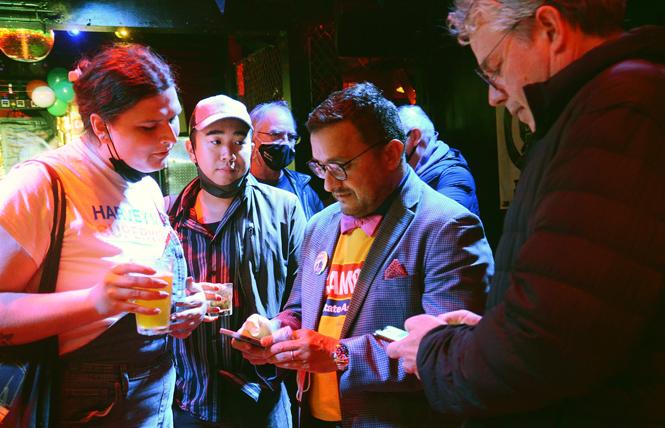 His resignation in November to become San Francisco's first Asian American city attorney sparked the special election Tuesday for his legislative seat covering the eastern neighborhoods of the city. The district includes the LGBTQ enclaves of the Castro, Tenderloin, and South of Market.

Due to their name recognition and serving on the Board of Supervisors, Campos and Haney had been seen as the leading candidates among the four Democrats who had sought Chiu's seat. With so many people in the race, it was also expected that no one would be able to win the seat outright this month by garnering more than 50% of the vote.

Thus, the top two vote-getters are expected to face off against each other in the special April 19 runoff election. The victor will serve through the end of Chiu's term in early December and needs to seek a full two-year term first on the June 7 primary ballot then the November 8 general election.

Campos, endorsed by the Bay Area Reporter and a slew of LGBTQ leaders and groups, would be the city's first Latino legislator and return LGBTQ representation from San Francisco to the Legislature's lower chamber. He would bring the Legislative LGBTQ Caucus in Sacramento back to having nine members. 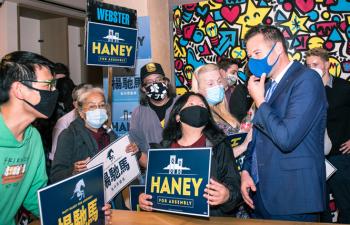 Should Haney win the race, he would resign from his supervisor seat on the board, requiring Mayor London Breed to fill the vacancy. He has campaigned for Assembly by noting his de facto chief of staff at City Hall, Honey Mahogany, could be named as his successor and become the first transgender person to serve as a supervisor in the city.

Also running in the special election was former Obama administration staffer Bilal Mahmood. He would be the first person of Muslim identity and Pakistani American identity to serve in the California Legislature.

Mahmood was in third place with 21% of the vote, according to the early returns.

City College of San Francisco Trustee Thea Selby, seeking to return female leadership to the state Legislature from San Francisco, was in fourth place with 6% of the vote.

The race had become increasingly negative in recent weeks, with Haney and Campos arguing over who would be better to help lead the charge for creating a system of universal health care in California. The latest legislative effort to do so recently died in an Assembly committee, but lawmakers are expected to revive it in the future.

They both faced questions over how they would address the state's affordable housing crisis, with the two criticized for not doing enough to build more below-market-rate housing in San Francisco as supervisors. Haney also came under fire for the open-air drug usage and dealing, crime, and homeless encampments in his district.

Mahmood, a relative unknown in city politics, was endorsed by the San Francisco Chronicle but also faced questions about his failure to vote in local elections over the years. With $550,000 of his own money, he flooded television screens for weeks with campaign spots in an attempt to raise his visibility among voters.

Haney, endorsed by the San Francisco Examiner, and his union backers also paid for TV ads, one of which needed to be bleeped for using a swear word as part of its tagline. Financially unmatched, partly due to his self-imposed restrictions on the contributions he will accept, Campos had in recent weeks been able to afford pop-up ads online.

Meanwhile, Selby made the most of the numerous candidate forums myriad groups held in order to pitch herself to voters. It has been a decade since San Francisco has had a female representing it in the Legislature.

This story will be updated as additional election results come in.