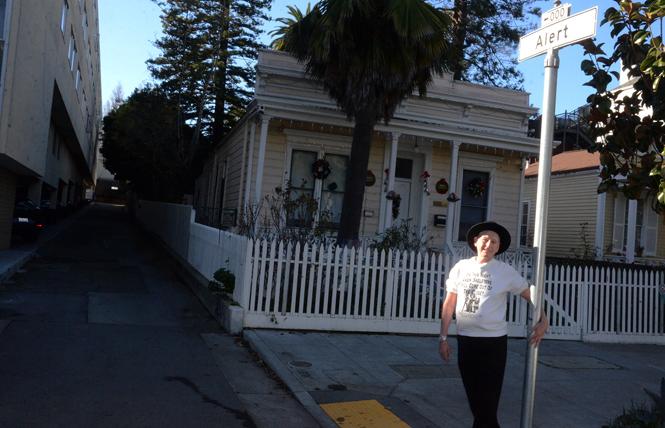 Ken Bunch, also known as Sister Vicious Power Hungry Bitch, will soon have a portion of Alert Alley named "Sister Vish-Knew Way" thanks to approval February 15 by the San Francisco Board of Supervisors. Photo: Rick Gerharter

Come Easter weekend in mid-April Sister Vish-Knew should be posing for photos underneath new street signs bearing her name. The co-founder of the international drag nun philanthropic group the Sisters of Perpetual Indulgence is now one of three drag personas with streets named in their honor in the City-by-the-Bay.

The San Francisco Board of Supervisors unanimously voted 11-0 Tuesday in support of ceremonially naming Alert Alley as "Sister Vish-Knew Way." It means residents of the alley between Dolores and Landers streets will not have to officially update their addresses.

The new street signs bearing both names are expected to be unveiled Saturday, April 16, the day prior to Easter when the Sisters plan to hold their annual celebration of their founding over Easter weekend in 1979. It was when Kenneth Bunch helped birth the Sisters of Perpetual Indulgence inside an apartment in the building at 272 Dolores Street, near the alley.

Bunch, 69, who for decades has lived nearby the roadway in the Mission Dolores neighborhood, had brought several nuns' habits with him when he relocated from Iowa to San Francisco in early 1977. Two years later he and some friends donned the religious garb on the eve of Easter and headed out into the city's streets.

It was the first public unveiling of the Sisters, which today has orders in 60 different cities and 14 countries. The street naming honor for Bunch is believed to be the first time a member of the Sisters has had a roadway named after them anywhere on the globe.

"I love it," Bunch told the Bay Area Reporter about having a street named in his honor.

He joked he will need to put a security camera up to ensure no one defaces the signs.

"I will run right down to clean off whatever graffiti is put on it," said Bunch, noting he had lived half his life now near the alley and walks by it nearly every day.

Initially, he had gone by Sister Ady in reference to Ardhanarishvara, which is a form of the Hindu deity Shiva combined with his consort Parvati. They are usually depicted as half-male and half-female.

Later, Bunch was ordained the Sister's Grand Mother Vicious Power Hungry Bitch. He shortened it to Sister Vish-Knew so his name wasn't so long or sounded as harsh.

The second half came about from repeatedly being asked if he knew the Sisters would have such longevity when he helped found them so many decades ago. The first half is in homage to the Hindu god Vishnu.

"I am thrilled that San Francisco is going to recognize the invaluable contribution that Ken Bunch, aka Sister Vish-Knew, has made to the quality of queer life around the globe," Sister Roma, recently elected the local order's Mistress of Novices to assist new aspirants, told the B.A.R.

Roma had initially broached the idea of naming a street in honor of Bunch last June, as the B.A.R. first reported in January. Gay District 8 Supervisor Rafael Mandelman, who represents the Mission Dolores neighborhood, agreed to sponsor the civic honor for Bunch.

In presenting it Monday to the Board of Supervisors' land use and transportation committee, which unanimously voted 3-0 in support, Mandelman said Sister Vish-Knew was worthy of being recognized for "her lasting impact on San Francisco and the global LGBTQ+ community."

In addition to his philanthropic work Bunch has played a prominent role in various chapters of LGBTQ history. He and fellow activist Tracy Bjorgum in 1976 were the first men to apply for a same-sex marriage license in Iowa, generating newspaper headlines across the Hawkeye State.

Two years prior Bunch helped publish the first issue of the Radical Faerie magazine RFD from the attic of his Iowa home. In 1974, he also produced the first Midwest Gay Pride Conference at the University of Iowa.

He marched alongside the late Harvey Milk, San Francisco's first gay supervisor, protesting anti-LGBTQ laws in 1977. Two years later Bunch was among the demonstrators outside of City Hall taking part in the White Night riots protest of the lenient verdict handed down to Dan White for assassinating Milk and then-mayor George Moscone in 1978.

For five years in the early 1990s Bunch helped produced the first Halloween in the Castro event with the Sisters and raised hundreds of thousands of dollars shared with the event partners Community United Against Violence and the San Francisco Gay Men's Chorus. He also is credited with being the first person to demand, at the 1993 Creating Change Conference, the inclusion of transgender issues and speakers at the LGBTQ events the March on Washington and the Stonewall 25th anniversary.

"Sister Vish-Knew has been an activist for more than half a century and she is still involved in the community and the organization she created in San Francisco in 1979. She has transformed the lives of thousands of people for the better and raised millions of dollars for charity," said Sister Tilda NexTime, an abbess and current president of the local order, at the committee hearing. "I do believe she deserves recognition. She is one of those characters who make San Francisco the city we love so much."

The street signage is sure to be a draw for locals and visitors alike, predicted Sister Tilda NexTime.

"It will be a place to celebrate diversity, inclusion and equality in San Francisco," she said. "It will inspire new generations of social activists."

Not too far away from Alert Alley is José Sarria Court along the block of 16th Street where the Eureka Valley/Harvey Milk Memorial Branch Library is located. Sarria performed in drag at the North Beach gay bar the Black Cat in the 1950s and, with his 1961 unsuccessful bid for supervisor, was the first out LGBTQ person to seek elected office in the U.S.

Other LGBTQ luminaries with San Francisco streets named for them include Frida Kahlo, Dr. Tom Waddell, Alice B. Toklas and Jack Kerouac. The 100 block of Taylor Street is also named Gene Compton's Cafeteria Way for the business where a transgender-led uprising against police brutality occurred in 1966.