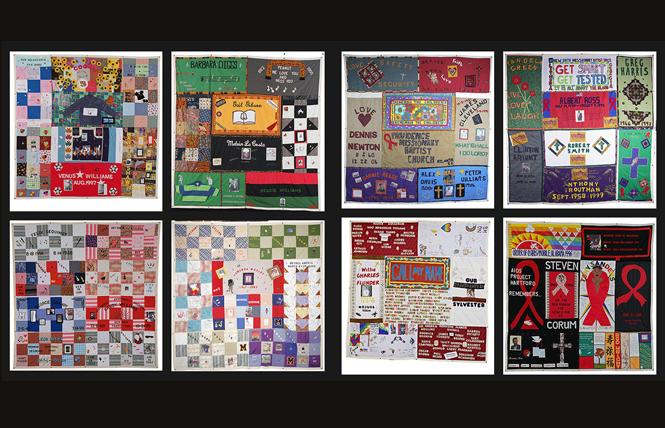 Some of the National AIDS Quilt panels in the Black History Month virtual exhibition are from the "Call My Name" program that organized quilt-making events in Black communities. Photo: Courtesy National AIDS Memorial Grove

According to a news release, the material, which the public can access online for free, uses the power and beauty of the AIDS Memorial Quilt to bring to light the countless Black men, women, and children who have died of AIDS during the 40 years of the pandemic, and the continuing impact of HIV in the Black community today.

The AIDS grove took over stewardship of the quilt in 2019 and has been doing various online programs to bring new attention to the panels that memorialize those lost to the disease.

"Our hope is that these online programs help raise greater awareness about the ongoing struggle with HIV and the impact systemic barriers have on positive health outcomes, particularly in the Black community," stated John Cunningham, AIDS grove CEO. "This collection of powerful stories are part of the hope, healing, and remembrance these two national treasures — the grove and the quilt — bring to our nation throughout the year."

The virtual exhibition of the quilt features touching stories that include letters, news stories, and photos about quilt panels made to honor Black people who have passed away. One panel shares the story of Belynda, a Massachusetts AIDS activist who dedicated herself to helping organize Black churches in the fights against AIDS (Block 5718). Other panels include those honoring Black men, including several that have military uniforms sewn into them to honor their service (Block 5976).

"The grove and quilt hold a special place in my heart," Payne stated. "Both have provided comfort to millions of people during the darkest days of the AIDS pandemic. Today, they are important teaching tools to raise greater awareness about HIV/AIDS, particularly in Black and Brown communities where rates of infection continue to be disproportionate."

Participants will enjoy games about iconic African American figures in history and there will be a special presentation by former Black Panther Party member Pamela Ward Pious, who will share her experiences and community advocacy work.

The film spans almost 50 years, from the 1970s to today, and features 22 activists recounting the struggles and discrimination they endured, a news release stated. It's a companion piece to the museum exhibit, "Coming Out: 50 Years of Queer Resistance and Resilience," that is on display at History San José.

The film was directed by award-winning documentarian and SJSU Professor Bob Gilner, who co-produced the film with Ken Yeager, executive director of the BAYMEC Community Foundation. (Yeager is also a former San Jose City Councilmember and Santa Clara County supervisor.)

"Each of the 22 inspirational people interviewed in the film are deserving of their own hourlong documentary," Yeager stated. "Their impact on queer politics and culture has been profound. I'm proud to give them the recognition they deserve."

COVID-19 protocols will be enforced at the event. Tickets are $25 and can be purchased here.

BALIF gala goes virtual
Bay Area Lawyers for Individual Freedom was going to have its annual gala return to an in-person format this year, but organizers now say it will be virtual due to the ongoing COVID-19 pandemic. Two years ago, BALIF's gala was one of the last in-person events before the city shutdown at the beginning of the pandemic.

"When we chose 'Unity in Strength' as this year's theme, it was a testament to our belief that 2022 would be the year we may once again gather as a community face-to-face," an email from the LGBTQ bar association stated. "However, it has become clear that a live gala just isn't a feasible option for BALIF this year; the risk of COVID transmission, low event attendance, and reduced membership and sponsor support compared to years past remain an unfortunate reality for many organizations as the pandemic continues on, including ours."

Organizers stated that there will be an in-person after-party at a local bar at 8:30 p.m. after the virtual event. Additional details were not available.

Tickets for the virtual gala are $100 for students, government, or nonprofit workers, and $150 for attorneys in private practice. Sponsorships are also available. For more information, click here.

Mary Richards-Rocos was a longtime freelancer with the paper. She and her husband, John Rocos, relocated to the Palm Springs area more than 20 years ago.

"My beloved wife of 37 years is losing more physical and mental abilities and needs more care as time goes on," John Rocos wrote on the crowdfunding site. "She needs oversight and care around the clock, which I give her. She has suffered a number of falls and has had both hips replaced in the last few years. Thankfully hospital tests show there were no breaks or permanent injuries. She should be healed up in about four to six weeks.

"Social Security is a wonderful thing but a bit more is required to keep things working," he added. "For years now we have been able to fill in the cracks, but with COVID shutting out some opportunities and inflation increasing and more medical expenses, Mary needs a fund to keep her safe and sound in her home with her two kitties for a while. Otherwise, she will face a crisis."

In the 1980s, in the middle of the AIDS crisis, Richards was a volunteer on San Francisco General Hospital's Ward 5A, the AIDS Ward, helping the patients after work and weekends. She also worked as a Shanti Project volunteer: visiting, home cleaning and providing care to people dying alone in their homes of AIDS, her husband noted.

"She has been a supporter of human rights for LGBT people for decades and wrote many pieces for the Bay Area Reporter over the years. Since we have been here she has been a volunteer for the Palm Springs Animal Shelter and the Cathedral City Senior Center," he added.