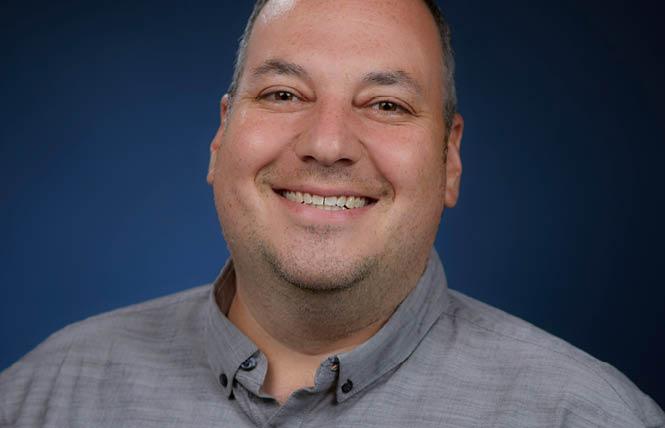 After an impressive career in building community and services for LGBTQ Pennsylvanians in Allentown, Adrian Shanker has set his sights on California, specifically, the Bay Area.

Shanker, a gay man and New York native, is the new executive director of the Spahr Center, Marin County's "nonprofit community agency devoted to serving, supporting, and empowering Marin's LGBTQ+ community and everyone in the county living with and affected by HIV," according to its website. The center serves 600 clients per year. He will start work April 1, replacing the retiring Dana Van Gorder, a gay man who has held the post since 2019.

"As a passionate advocate for the health and wellness of LGBTQ+ and HIV communities, I am deeply motivated and beyond excited to join the team at the Spahr Center as its next executive director," Shanker, 34, stated in a news release. "The Spahr Center has a strong history of providing essential services for Marin County's LGBTQ+ and HIV communities, and I'm thrilled to become part of its next chapter."

Denny David, the Spahr Center board president, stated that Shanker has the experience the organization was looking for. It began a search for its next executive director last year, after Van Gorder announced he would be stepping down. Van Gorder previously led Project Inform until 2018 and, prior to that, held a leadership role at the San Francisco AIDS Foundation. Project Inform closed in 2019.

"We are excited to welcome Adrian to our community," David stated in a news release. "We know that his experience founding an LGBT center and commitment to health equity will ensure the Spahr Center reaches the goals outlined in our strategic plan: ensuring every LGBTQ+, HIV-positive, and affected person in Marin County feels that we belong, are valued, and that our civic institutions ensure our health and well-being."

The incoming executive director brings an impressive history of activism and experience to his new post. Shanker founded the Bradbury-Sullivan LGBT Community Center back in 2014, and since then "has led the fundraising, property acquisition and program development from the startup phase to its current annual budget of $1.6 million with two-dozen employees," according to the Morning Call newspaper in Allentown.

"Our greatest success has certainly been the physical opening of Bradbury-Sullivan LGBT Community Center in 2016," Shanker wrote in an email to the Bay Area Reporter. "With tremendous community support, we were able to acquire and open a 13,000 square foot facility in the heart of downtown Allentown, and then completely eliminate the center's mortgage just four years later."

Under his leadership, the Allentown center participated in a national coalition that successfully sued former President Donald Trump's administration challenging a proposed rule that would have allowed health care providers to deny services to patients if the provider felt that doing so would compromise their own religious or moral convictions.

In 2011, Shanker was elected president of Equality Pennsylvania by the membership, succeeding Brian Sims, a gay man who went on to serve in the Pennsylvania House of Representatives and is currently running for lieutenant governor. Shanker served for three years before moving on to what would become the Bradbury-Sullivan LGBT Community Center. Somehow, in the midst of all that, Shanker has also written or edited two books, "Bodies and Barriers: Queer Activists on Health," and "Crisis and Care: Queer Activist Responses to a Global Pandemic."

"As the founding executive director of Bradbury-Sullivan LGBT Community Center it was certainly a bittersweet decision to leave Allentown, Pennsylvania, and relocate to the West Coast," Shanker wrote in the email, "but I'm also super excited about the programs and mission of the Spahr Center. I am especially excited to join an organization that provides harm reduction programs such as syringe services, which is not possible in Allentown because of restrictive state laws in Pennsylvania."

News of Shanker's departure from Allentown prompted much praise in the local press for the man and his work, including from the mayor of Allentown.

"I think he's super impressive," said Van Gorder of his successor in a telephone interview. "By virtue of having founded a community center and built it from the ground up, he clearly has the chops ..."

Van Gorder is leaving a strong institution to Shanker, he said. During his tenure, the Spahr Center went from about a $995,000 budget to a $2.4 million budget. "We've created a lot of new programs on the LGBTQ side and developed a solid strategic plan for the work at the center," he said.

"The HIV portion is very well funded and very robust," Van Gorder added. "The challenge, however, is finding the funding to beef up the center's additional community services." That shouldn't be a problem for the new executive director, Van Gorder noted, as Shanker loves fundraising.