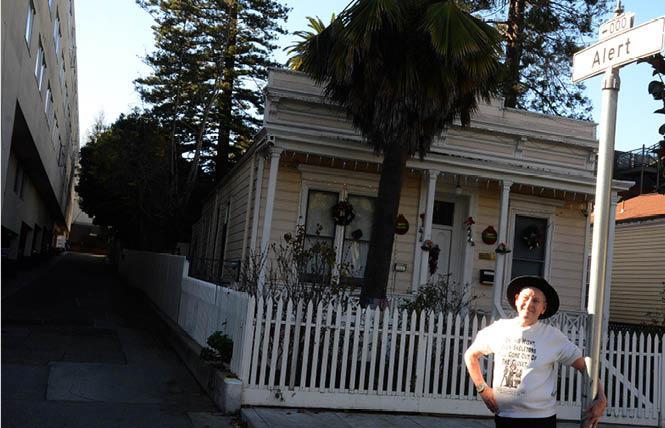 Kenneth Bunch, aka Sister Vish-Knew and Sister Vicious Power Hungry Bitch, stands at the corner of Alert Alley, which Supervisor Rafael Mandelman wants named in his honor. The proposal advanced out of a supervisors' committee February 14. Photo: Rick Gerharter

A founding member of an international drag nun philanthropic group is one step closer to having a San Francisco street be named in their honor. It is expected the new signage for "Sister Vish-Knew Way" along a block of Alert Alley will be in place by Easter.

As the B.A.R. scooped last month, gay District 8 Supervisor Rafael Mandelman is sponsoring the civic honor for Kenneth Bunch, who lives nearby the roadway in the Mission Dolores neighborhood. It is also close to where Bunch and a few friends birthed the Sisters of Perpetual Indulgence over Easter weekend in 1979.

At its meeting Monday, the Board of Supervisors' land use and transportation committee unanimously voted 3-0 in favor of the street naming. The full board is expected to approve it at its meeting Tuesday (February 15).

Mandelman told the committee members Sister Vish-Knew was worthy of being recognized for "her lasting impact on San Francisco and the global LGBTQ+ community."

"This is very exciting," said Melgar. "I am so excited you are doing it."

The street naming for Bunch will purposefully be a ceremonial one, meaning the residents of the alley will not have to officially update their addresses. Once approved, the city would erect new street signs on the alley that have both its honorary and existing names for it.

Sisters beginning
It was at an apartment in the building at 272 Dolores Street, near the alley, where Bunch and a few friends first donned the religious garb the day prior to Easter in 1979. It was the first public unveiling of the Sisters, which today has orders in 60 different cities and 14 countries.

Bunch had brought the habits with him when he moved from Iowa to San Francisco in early 1977. Initially, he had gone by Sister Ady in reference to Ardhanarishvara, which is a form of the Hindu deity Shiva combined with his consort Parvati. They are usually depicted as half-male and half-female.

Later, Bunch was ordained the Sister's Grand Mother, Vicious Power Hungry Bitch. He shortened it to Sister Vish-Knew so his name wasn't so long or sounded as harsh.

The second half of his new moniker came about from repeatedly being asked if he knew the Sisters would have such longevity when he helped found them so many decades ago. The first half is in homage to the Hindu god Vishnu.

Fellow drag nun Sister Roma, recently elected the local order's Mistress of Novices to assist new aspirants, first broached the idea of naming a street in honor of Bunch last June. As far as Roma and Bunch are aware, no member of the Sisters has a street named after them anywhere on the globe.

Due to Bunch's helping to launch the Sisters, Roma told the supervisors' committee, "It's incredible to me to know people all over the world are serving their communities fighting for justice and raising a lot of money for people who need it. And it all started because Sister Vish had this crazy idea to go out in these nuns' habits and created a worldwide movement."

In addition to his helping to birth the Sisters, Bunch has played a prominent role in various chapters of LGBTQ history. He and fellow activist Tracy Bjorgum in 1976 were the first men to apply for a same-sex marriage license in Iowa, generating newspaper headlines across the Hawkeye State.

Two years prior Bunch helped publish the first issue of the Radical Faerie magazine RFD from the attic of his Iowa home. In 1974, he also produced the first Midwest Gay Pride Conference at the University of Iowa.

He marched alongside the late Harvey Milk, San Francisco's first gay supervisor, protesting anti-LGBTQ laws in 1977. Two years later Bunch was among the demonstrators outside of City Hall taking part in the White Night Riots protest of the lenient verdict handed down to Dan White for assassinating Milk and then-mayor George Moscone in 1978.

For five years in the early 1990s Bunch helped produced the first Halloween in the Castro event with the Sisters and raised hundreds of thousands of dollars shared with the event partners Community United Against Violence and the San Francisco Gay Men's Chorus. He also is credited with being the first person to demand, at the 1993 Creating Change Conference, the inclusion of transgender issues and speakers at the LGBTQ events the March on Washington and the Stonewall 25th anniversary.

Bunch is the third drag persona to be honored with a street naming in San Francisco. Not too far away from Alert Alley is José Sarria Court along the block of 16th Street where the Eureka Valley/Harvey Milk Memorial Branch Library is located.

Sarria performed in drag at the North Beach gay bar the Black Cat in the 1950s. With his unsuccessful run in 1961 for a supervisor seat, Sarria became the first out LGBTQ person to seek elected office in the U.S.

Other LGBTQ luminaries with San Francisco streets named for them include Frida Kahlo, Dr. Tom Waddell, Alice B. Toklas, and Jack Kerouac. The 100 block of Taylor Street is also named Gene Compton's Cafeteria Way for the business where a transgender-led uprising against police brutality occurred in 1966.