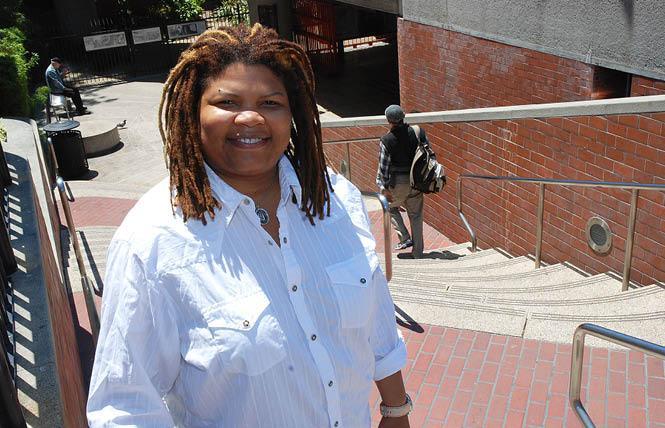 Ahead of a vote at the San Francisco Board of Supervisors that likely would reject her reappointment to the city's juvenile probation commission, Andrea Shorter withdrew her name from consideration for the post.

Shorter, a Black lesbian, had served on the commission since May 2021. Mayor London Breed reappointed her to a new four-year term that would have ended January 15, 2026. Shorter's withdrawal comes amid controversy over her role in the campaign to recall District Attorney Chesa Boudin. The Board of Supervisors has the power to reject Shorter being appointed to a new term.

And that appears to be where the supervisors were headed. At their February 8 board meeting, the supervisors voted 7-3 to continue their decision on Shorter to the February 15 meeting, effectively meaning that she did not have the four votes necessary to keep her seat. It requires eight votes on the board to reject her appointment. District 6 Supervisor Matt Haney was absent last week, but his vote was not seen as favorable to Shorter.

"Thank you for your confidence in my continued service on the Juvenile Probation Commission," Shorter wrote. "It has truly been an honor to serve the City and County of San Francisco under your leadership.

"Family matters have developed limiting my capacity to serve at this time. As such, I have elected to withdraw from the present nomination for reappointment for a full term on the Juvenile Probation Commission," she wrote.

Shorter did not return a text message seeking comment.

At the supervisors' rules committee meeting January 31, chair District 3 Supervisor Aaron Peskin, and District 1 Supervisor Connie Chan voted to forward on Shorter's reappointment to the full board with no recommendation for a vote.

Mandelman, the committee's other member, voted against the no recommendation. Noting the lack of LGBTQ representation on city oversight panels, particularly people of color, Mandelman had argued there was no reason to reject Shorter's being given a full term.

Among Shorter's many public policy roles in her career, she twice worked for the Center on Juvenile and Criminal Justice. In the mid-1990s she directed its juvenile programs and policy then served as its deputy executive director in the early 2000s.

"Based on what I have seen so far, I am planning to support her ...," Mandelman, the lone LGBTQ member on the board, had told the Bay Area Reporter following the rules committee vote.

At the rules committee meeting, Peskin said that he believes Shorter's role serving on a commission that interacts with law enforcement and her job on the campaign to recall Boudin presented what he called "an inherent operative conflict."

Shorter, who spoke at the virtual committee meeting, disagreed, saying her role as a commissioner doesn't provide any conflict. She acknowledged that she is working on the campaign to oust the DA.

Shorter has long been a controversial figure in city politics. A longtime former member of the city's Commission on the Status of Women, she was involved in the drive to oust then-sheriff Ross Mirkarimi, a former progressive supervisor, following his being charged of abusing his wife in December 2011. He pleaded guilty to a misdemeanor charge of false imprisonment, followed by then-mayor Ed Lee suspending him from his elected position.

The bisexual woman Lee appointed to succeed Mirkarimi after he stepped down from his District 5 seat on the board, Supervisor Christina Olague, subsequently voted to reinstate Mirkarimi as sheriff. But her decision partly led to her being ousted from office in November 2012, with Shorter among her more vocal critics.

It was Breed who won that supervisorial race, and following Lee's sudden death in 2017, she briefly served as mayor due to her being board president at the time. Bounced from the position by the supervisors, she reclaimed Room 200 at City Hall by becoming the first Black woman elected mayor in the special election in June 2018 to serve out the remainder of Lee's term.

Shorter worked to help elect Breed that summer and now is behind the drive to recall Boudin, one of a number of progressives elected as district attorneys across the country in recent years. But she has been accused of violating ethics laws for appearing in a campaign mailer and video without disclosing that she is a paid recall staffer, earning $16,000 a month, as the left-leaning 48Hills news site reported in early January.

A few weeks later the San Francisco Chronicle reported that the San Francisco Democratic Party had filed a state complaint against the Boudin recall committee alleging it had violated campaign laws for "misrepresenting its paid spokesperson as an independent critic of the prosecutor."

In 2013, Shorter herself had run afoul of disclosure rules when the state's Fair Political Practices Commission fined her $800 for failing to disclose her income during a four-year period while serving on the city's women's commission. As SF Weekly noted at the time, Peskin had filed the complaint against Shorter with the statewide watchdog group.

Peskin asked Shorter about that complaint at the committee meeting. Shorter said that she was fined the minimum amount. "Yes, I was fined in 2012," Shorter said.