Gay SF cop gets $225K in settlement of discrimination case 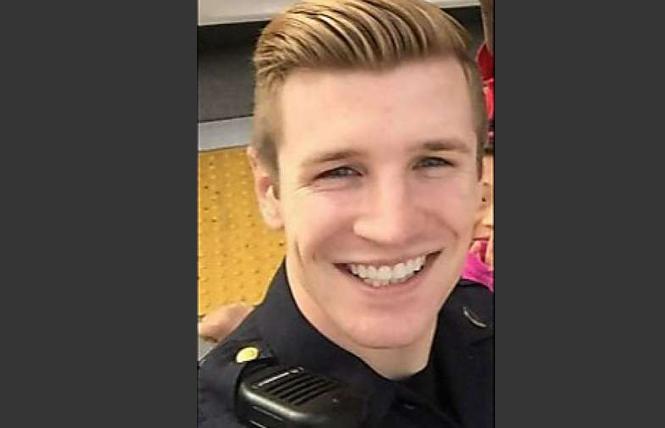 Three years and seven months after a gay San Francisco cop filed a lawsuit against the City of San Francisco alleging workplace harassment and discrimination, his case has finally been settled.

The San Francisco Board of Supervisors voted to award a settlement of $225,000 to Officer Brendan Mannix at its February 8 meeting. It was the second and final board vote on the settlement.

Mannix was 28 when he filed his lawsuit back in 2018 after allegedly experiencing continued harassment by Sergeants Patrick Tobin and Lawrence McDevitt, as Mission Local reported. The suit, filed in San Francisco Superior Court, alleged the two sergeants in Central Station, where Mannix was transferred in 2016, frequently made comments to Mannix relating to his sexual orientation. The suit claimed the officers commonly called Mannix "such a queen," and "too dramatic."

When Mannix did something that the sergeants considered stereotypically gay, the suit claimed they said, "Ugh, you gays," or "God, you gays."

The harassment "was so severe, widespread, and/or persistent that a reasonable gay man in Plaintiff´s circumstances would have considered the work environment to be hostile or abusive," according to statements in the original filing.

The city settled the case rather than proceed with the lawsuit.

"Given the inherent costs of continued litigation," Jen Kwart, communications director for the San Francisco City Attorney's office, wrote in a text, "we believe the settlement is an appropriate resolution."

Calls to Mannix´s attorney, Lawrence Organ, were not returned by deadline.

In 2018, Organ had told the B.A.R. that Mannix decided to sue so that "in the future if an officer complains they know the department will treat the complaint seriously and protect them against any retaliation."

Mannix's lawsuit alleged numerous hostile acts by Tobin and McDevitt. In addition to snide comments and mockery, the suit included charges that Mannix's colleagues failed to support him when he called in for back-up.

According to the lawsuit documents, in April 2017, Mannix witnessed a robbery in progress. Pursuing the suspect down Market Street, he radioed for back-up but "no back-up arrived immediately." The young officer nabbed the suspect on his own and, fortunately, officers from another station were nearby and able to help, the complaint states.

"Mr. Mannix remained on the scene for over an hour," the documents read, "but no sergeant from his station arrived, despite SFPD policy."

When Mannix finally made it back to Central Station, he found Tobin "relaxing at a desk." When he stated his concerns about the lack of support, Tobin replied, "Jesus, don´t be such a queen!" the complaint states.

Mannix found inaction on the part of SFPD when he tried to report his complaints. Following three months of leave from May to August 2017, during which time Mannix tried to recover from anxiety and sleeplessness due to the harassment, he decided to file a formal complaint with the city's Department of Human Resources, the suit states.

On August 27, Mannix asked Sergeant Maria Ciriaco to file a formal complaint on his behalf to both the Department of Human Resources and its Equal Employment Opportunity Division. "Sergeant Ciriaco was dismissive, but said she would document it," according to the lawsuit documents.

When she actually wrote up the complaint, however, she omitted "nearly all" the incidents Mannix had described to her, insisting "his other allegations could not or should not be included. Mannix took her at her word," the suit states.

Harassment continued even after the complaint was filed, according to the suit. Additionally, Mannix found himself receiving "the worst assignments" from Ciriaco, who further instructed others not to make any changes to her assignments for Mannix when he complained. He frequently found himself being given hourslong assignments from Tobin and McDevitt as his own shift was drawing to a close. Usually, there were other officers on duty earlier in their shifts, who would have been able to take on the tasks instead.

In December, 2017, the human resources' Equal Opportunity Division found against the complaint Mannix had filed with Ciriaco because she had allegedly omitted so many of the incidents he had attempted to report. The settlement approved by the Board of Supervisors brings the case to a close.

Since then, Tobin has retired but not before taking a position as a reserve police officer with the Broadmoor Police Department in June 2017. Brought in by former SFPD Deputy Chief Michael Connolly who was serving as police chief of the Peninsula community, Tobin was later promoted to commander in the Broadmoor department, where he also received notable perks, according to an April 21, 2021, story by Mission Local, including two Ford Explorers: one for on-duty use and, another, for "off-duty." Soon after, Connolly resigned in a flurry of scandals involving cronyism, abuse of power, and misuse of funds. Tobin assumed Connolly's position as interim chief in July 2021 and was replaced by current police chief Mark Melville last December.

McDevitt and Ciriaco are both still working with the SFPD but as to whether McDevitt faced any disciplinary action, the SFPD's media relations department declined to say.

"We are not able to speak to personnel matters such as disciplinary actions," Officer Robert Rueca with the SFPD's media relations department, wrote in an email. It also declined to comment on Ciriaco.

Mannix is still at the SFPD's Central Station. He did not respond to an inquiry from the B.A.R.