Out in the World: US Senate confirms lesbian as director of Asian Development Bank 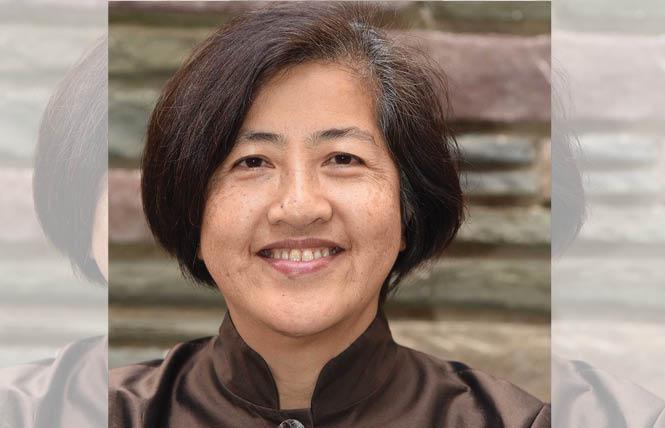 Chantale Wong has been nominated to be U.S. director to the Asian Development Bank. Photo: Amida.com

LGBTQ organizations praised the Senate's confirmation of Chantale Wong as the first openly lesbian of color appointed to an ambassador-level position for the U.S. as director of the Asian Development Bank February 8.

Wong, an international development expert, was overwhelmingly confirmed 66-31 in a bipartisan vote by the Senate. She noted in a Facebook post that it came 22 years after former President Bill Clinton had appointed her to the bank's board as its alternate executive director.

"I was young and impressionable and had so much to learn," wrote Wong. "Tonight the US Senate confirmed me to return to the ADB as Pres. Biden's appointee. It is with great pride and humility I will serve once again at the ADB and knowing the challenges ahead will be great. I am ready!"

In the 1980s Wong worked as an environmental engineer for the city of San Francisco. More recently she took up photography and often visits the Bay Area to photograph the environs. During a 2017 trip she documented the human condition on the streets of San Francisco for a project that lasted 24 hours.

"For too long, the ranks of ambassadors have failed to reflect the diversity of the LGBTQ+ community," Madison said in a statement from the organization. "Ambassador Wong's confirmation is one step closer to achieving a future where all members of the LGBTQ+ community can see themselves reflected at the highest levels of government."


Imani Rupert-Gordon, executive director of the San Francisco-based National Center for Lesbian Rights, declared Wong's confirmation as President Joe Biden's clear intent to fulfill his promise to transform the executive branch of the federal government to reflect the nation.

She was "heartened to see LGBTQ individuals finally being represented in the highest levels of government for the first time in history," she stated in a news release.

Rainbow Beginnings co-founders and partners Ubaldo Boido and Craig Scott were also excited about the news. The organization advocates and supports LGBTQ people seeking refuge in the U.S.

Boido, a gay Mexican American, was pleased by Wong's confirmation and recognition of her accomplishments as a professional queer woman of color.

"There are people of color that are qualified and it's our obligation to go look for those people and uplift them," he told the Bay Area Reporter.

Scott loved the fact that countries that are challenged dealing with women — and that she's a lesbian — "have to deal with this woman."

Annise Parker, president and CEO of the LGBTQ Victory Institute, the educational arm of the LGBTQ Victory Fund, called Wong's confirmation "a powerful statement" to nations that criminalize LGBTQ people and suppress their human rights, in a statement following the confirmation. She added Wong's confirmation is also a "symbol of hope and strength for LGBTQ leaders and community members fighting for LGBTQ rights across the globe."

"As a leading authority in international development, Ambassador Wong is exceptionally qualified for this multi-disciplinary role at the intersection of finance, technology, and the environment," Cicilline stated. "Ambassador Wong's leadership will demonstrate to leaders from the other member states that LGBTQ+ people deserve acceptance and equality."

Wong previously served as budget director at NASA and acting budget director of the U.S. Treasury Department. Clinton appointed her as a U.S. representative to the Asian Development Bank, a June 2021 news release from the White House stated.

HRC's Madison noted that Wong's confirmation comes at a "critical time for U.S. leadership" as the "institution conducts its once-in-a-decade review of operating policies that could bolster LGBTQ+ inclusion in its projects across the region."

Rupert-Gordon acknowledged "there is still much work to be done on elevating LGBTQ nominees to federal judicial roles."

Parker supported Wong's confirmation through the Victory Institute's Presidential Appointments Initiative, according to a February 8 statement from the organization.

According to the release, the LGBTQ Victory Institute's Presidential Appointments Initiative was launched during the Clinton administration. The initiative achieved unprecedented success under former President Barack Obama, who appointed approximately 330 LGBTQ people, the most in history. Of those, 158 were assisted by the initiative.

Out in the World: Russia hits snag in first attempt to shutter LGBTQ rights organization
Sign up!