Out in the World: Passage of Global Respect Act signals US stands with LGBTQ people globally 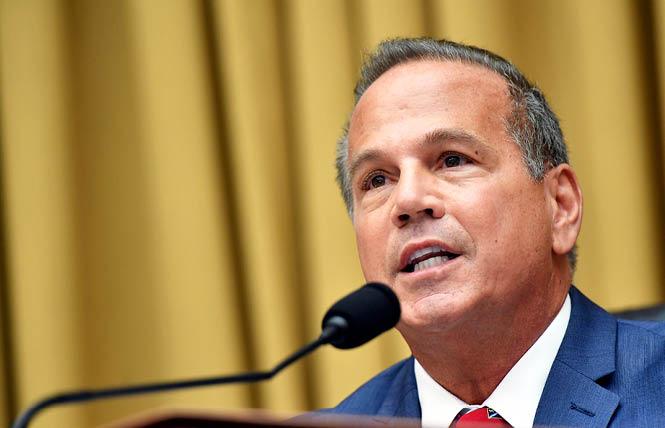 Signaling the importance of global LGBTQ issues, the U.S. House of Representatives has passed the Global Respect Act.

The bill, introduced by gay Congressmember David Cicilline (D-Rhode Island), passed on a vote of 227-206 February 9. It has now been referred to the Senate Foreign Relations Committee and has bipartisan support in the upper chamber of Congress.

Under the bill, the State Department would be tasked with tracking violence against LGBTQ people around the world. It could also deny or revoke visas for foreign perpetrators — individuals and state actors — based on human rights laws, preventing them from entering the United States.

LGBTQ people are criminalized in 71 countries around the world, according to Human Dignity Trust. LGBTQ people in many countries with anti-LGBTQ laws suffer from discrimination, blackmail, torture, physical and verbal assaults, and death.

"In too many places violence against this community is pervasive and even sanctioned or directed by government officials," Cicilline said on the House floor the day of the vote.

While Cicilline introduced the Global Respect Act (HR 3485) in May 2021, the issue has been debated in Congress since 2014. Wednesday marked the first time it received a vote on the House floor, according to the Council for Global Equality. The bill had 74 co-sponsors.

"Tragically, thousands of LGBTQ individuals are subjected to attack, harassment, arrest, and murder every year, suffering under state-sanctioned discrimination and an alarming surge of violence," she stated. "Yet, those responsible all too often act with impunity, never facing consequences for their crimes."

Senator Jeanne Shaheen (D-New Hampshire), who with Senator Lisa Murkowski (R-Alaska) introduced the companion bill in the Senate in June 2021, called the targeted violence against LGBTQ communities because of who they love and how they identify "reprehensible" in a statement from her office after the House's action.

"It's past time the U.S. sends a message to the global community that this violent discrimination will not be tolerated," she said, calling the House's vote an "important action today to stop the systemic jailing and murdering of people based on their sexual orientation and gender identity. Time is of the essence for LGBTQI people in danger."

Shaheen and Portman will secure the bill's first committee hearing, the Council for Global Equality stated in a news release. It is hoped there will be a vote in the full Senate by Pride Month in June.

Cicilline, who is also a co-chair of the House LGBTQ Equality Caucus, expressed his gratitude to his fellow representatives for passing the bill.

In a tweet, he echoed his statements on the House floor. The bipartisan support was "sending a strong message around the world that every member of the #LGBTQI community deserves to live with dignity and free from violence, unlawful detention, torture, and all forms of brutality."

And with BIPARTISAN support, the #GlobalRespectAct just passed the House, sending a strong message around the world that every member of the #LGBTQI community deserves to live with dignity and free from violence, unlawful detention, torture, and all forms of brutality. https://t.co/2Fn8YOxBVU pic.twitter.com/5CfIImUvxQ— David Cicilline (@davidcicilline) February 9, 2022

The bill has White House support and has been endorsed by LGBTQ organizations the Human Rights Campaign, Freedom House, and Council for Global Equality.

Critics
Despite the bipartisan support in Congress, the bill has its critics. Some said it duplicates existing human rights laws, threatens religious freedom, and politically targets opponents of pro-LGBTQ laws around the world. Cicilline rejected their claims.

In a daily update to her constituents on her website, Congresswoman Claudia Tenney (R-New York) explained why she voted against the bill. She claimed the law "prioritizes the rights of particular groups" by creating a new reporting mechanism. She claimed it would "impose visa restrictions on individuals for their deeply held religious beliefs."

"This legislation represents the administration's aggressive attempts to push radical culture war issues at every possible juncture — not only domestically, but also abroad," she stated.

Cicilline argued that the bill didn't duplicate existing rights within the 2016 Global Magnitsky Human Rights Accountability Act, rather it built upon "existing sanction authorities," he said.

"It does not impede on an individual's rights, freedom of speech, or religious beliefs," Cicilline told his fellow representatives from the podium.

The Magnitsky Act authorizes the president to impose economic sanctions and deny entry into the U.S. to any foreign person identified as engaging in human rights abuse or corruption.

Cicilline noted that the Magnitsky Act has "only been used once for LGBTQI human rights violations, despite many documented cases."

He said the bill targets "conduct" and "actions."

"We have a long tradition in this country," Cicilline said about America standing up for human rights. He told his colleagues that as a world superpower the U.S. has a responsibility "to continue to protect and stand up for human rights in the face of unspeakable violence."

Conservatives weren't the only ones critical of the legislation.

"I think it's a great start," said Ubaldo Boido, program manager at Rainbow Beginnings, a startup LGBTQI asylum, refugee, and migrant advocacy organization in San Francisco, about the House passage of the Global Responsibility Act. "There are sanctions that need to happen for the persecution of LGBTQ people globally."

However, Boido is critical of the bill.

"I definitely think it's maybe not strong enough, but it's a beginning," Boido said, hopeful that it could potentially help the LGBTQ asylum seekers, refugees, and migrants as well as those living in other countries, especially with documenting the abuses. He hopes that will translate into strengthening queer and gender-variant asylum and refugee cases.

The couple is disappointed about the Biden administration's first year in office, despite supporting Joe Biden's presidential campaign. They're critical of the administration's handling of individuals seeking refuge in the U.S.

A year ago, at the beginning of his presidency, Biden declared LGBTQ rights were going to be at the forefront of U.S. foreign policy.

Increasingly the couple became underwhelmed by Biden's actions on behalf of LGBTQ immigration and refugee rights throughout 2021. They are not alone. Biden's approval rating is at an all-time low, according to a CNN poll that revealed nearly 6 in 10 Americans disapprove of how Biden is handling his presidency and believe he hasn't done anything since he took office. The poll was conducted by SSRS January 10 through February 6 among a random national sample of 1,527 adults initially reached by mail. It was published February 10.

The couple's disillusionment first started with Biden's reinstatement of former President Donald Trump's "Remain in Mexico" policy. The policy left queer migrants fleeing violence, corruption, and poverty from Central American countries stranded at the U.S.-Mexico border. Then the withdrawal from Afghanistan happened, leaving queer Afghans behind in that war-torn country.

David Stacy, HRC's government affairs director, echoed Cicilline and other members of Congress in a statement following the House vote on the bill, adding the U.S. "won't stop fighting for their freedom and equal rights."

Out in the World: Report: Afghan LGBTQ people remain in peril, governments urged to act

Out in the World: Arrests made in Mexican lesbian couple's killing

Out in the World: Reports find conversion therapy disinformation thriving online
Sign up!