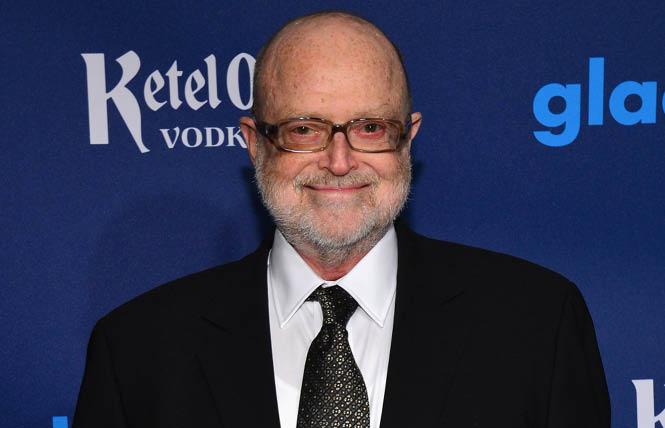 Arnie Kantrowitz, the early New York-based gay rights activist who wrote a classic queer memoir, taught one of the earliest gay studies college courses in the nation, and was a founding member of GLAAD, died January 21 from complications of COVID-19, according to his life partner, Dr. Lawrence Mass. He was 81.

Mr. Kantrowitz's memoir, "Under the Rainbow: Growing Up Gay," was published in 1977.

"We shared the sacrament of honesty, our coming out. Together we were something significant. We were a part of history, and we knew it," he wrote in his memoir, alluding to all the queer people who ran out of the closet in the tumultuous liberating years after the Stonewall riots in 1969. While Mr. Kantrowitz lived only two blocks away from the Stonewall Inn and noticed the remnants of a crowd nearby, "it seemed like nothing to me, so I retreated home," he wrote. Nonetheless, that event changed his life in that it compelled him to accept his gayness and share the news with his family and friends.

"When I first met Arnie he was the vice president of the Gay Activists Alliance. His was a steady, calm, even quiet form of leadership, a needed support to the more exposed and therefore vulnerable position of Jim Owles, GAA's founding president," Wandel wrote in an email to the Bay Area Reporter. "Arnie was an unrelenting activist, whether participating in a loud and disruptive 'zap,' or more quietly going about his university teaching duties."

Mr. Kantrowitz participated in protests such as against Harper's magazine for printing an article wishing gays were wiped off the face of the earth, he recounted in his memoir. He also led numerous City Hall demonstrations with his "Sodomy is Cool" sign, to advocate passage by the New York City Council of a homosexual rights bill (it became law in 1986), even willing in 1971 to risk almost being trampled by a cop on horseback.

But Mr. Kantrowitz, who described himself in his memoir as "a nice Jewish boy," from the beginning, was made of stern stuff. He was born November 26, 1940 in Newark, New Jersey to a lawyer father and real estate broker mother, "both difficult to love." Mr. Kantrowitz wrote that at age 6 seduced his first boy, a 14-year-old neighbor. He wrote that he felt like an "other" and couldn't reconcile his gayness with being Jewish. His mother took him to a doctor to "cure" his gayness, but the doctor said it was just a phase he would outgrow. Still, he described his coming out as a prolonged agonizing process, leading to navigating the repressive 1950s, psychoanalysis with a closeted psychiatrist, unsuccessful sexual trysts with women, and two suicide attempts.

Academic career
He majored in English, obtaining a bachelor's degree from Rutgers University-Newark in 1961 and a master's degree from NYU in English literature. Eventually from 1965 to 2006, he taught at the College of Staten Island (part of the City University of New York system).

Matt Brim, professor of queer studies at CSI, was a colleague of Mr. Kantrowitz's.

"Arnie Kantrowitz taught at Staten Island Community College and the College of Staten Island for over 40 years," Brim wrote in an email. "A pioneer in the academic field of gay studies, Kantrowitz offered the course 'Homosexuals and Literature' to his primarily working-class students for the first time in 1973. Against the backdrop of the Stonewall riots and gay liberation, these classes were a success thanks to a combination of Arnie's newfound political awareness and his humor. Arnie's courage and intellect were key to helping LGBTQ studies thrive at CSI, where his important work continues."

Mr. Kantrowitz became chairman of CSI's English Department in 1989. He counseled gay students about their sexuality when they approached him, telling them they would survive just as he had. In his obituary for the Gay City News, writer Andy Humm quoted Andy Podell, who once taught at CSI, that Mr. Kantrowitz "had a collection of rocks that he displayed on his desk at the college that had been thrown at his office window." Mr. Kantrowitz remained undeterred and continued to be a positive role model and an activist in the classroom, friends noted.

Mr. Kantrowitz was also one of the organizers of the first gay Pride parade in New York in 1970 to commemorate the first anniversary of the Stonewall rebellion. He gives an in-depth, first-hand description of that Christopher Street parade with all its excitement and anxieties in his memoir. He also chronicles the drug use, ubiquitous sex, and orgies in those post-Stonewall years in bars, bathhouses, and jaunts to Fire Island, in all of which he joyfully participated. His memoir, one of the first by an activist/spokesperson, bridges the gap between pre- and post-Stonewall gay life, combining wit, candor (i.e., explicit sexual language), and intelligence.

In 1973, he appeared with other GAA members on the TV show "Tonight Starring Jack Paar," educating the host about why the word "fairy" was offensive and telling the audience, "I love a man, and I'm not ashamed of it. I don't want to lie about it. Some of you are sitting next to your own children or brother or sisters who are gay and afraid to tell you, because they're afraid you won't love them anymore. You may be loving their lies. Why not give them a chance to be themselves? The more of us who come out of the closets, the easier it will be for the rest of us."

Mr. Kantrowitz wrote in his memoir that his family was mortified and disinvited him to their Passover Seder. His uncle declared him dead.

In 1985, along with his closest friend, activist and gay film historian the late Vito Russo, Mr. Kantrowitz co-founded what was then called the Gay Lesbian Alliance Against Defamation to counter homophobic, inaccurate, and slanderous media coverage of queer people.

"Arnie Kantrowitz's activism paved the way for the growing visibility, protections, and acceptance of the LGBTQ community that we see today," Ellis stated.

In 1982, Mr. Kantrowitz met Mass, who would become his life partner. Mass was a co-founder of Gay Men's Health Crisis, the first and largest AIDS information and service organization. In 2005, Mr. Kantrowitz wrote his second book, an introduction to the life and works of the gay poet Walt Whitman. He was elected grand marshal of the Staten Island LGBTQ Pride parade in 2009.

Timothy Stewart-Winter, an associate professor of history at Rutgers University-Newark, wrote the following tribute he sent to the B.A.R.: "I had the great privilege of interviewing Arnie about his early life, for the Queer Newark Oral History Project, and that interview mirrored what I see as his great gift for rendering into gorgeous words what it means to be gay in a straight society."

The gift is equally on view in a lyrical, passionate op-ed that he wrote that the New York Times published in 1973: "We are not newly created, only newly revealed," Stewart wrote. Black civil rights activists had shown that "the principle of variety," not melting-pot assimilationism, should be "the basis for the national identity."

Advancing the post-Stonewall gay movement's core tenet, he declared that it was imperative to disclose one's homosexuality — to "make ourselves visibly different," as Stewart put it — and that doing so would not only free us but "can teach much" to heterosexuals. In a phrase that editors used as the headline, he said, "We are already your children, your brothers and sisters, even your parents."

"This quote reflected his life's work and the work of his generation of activists to dissolve the boundary that gay people in the mid twentieth century had been forced to maintain between their gay lives and the straight world," Stewart wrote.