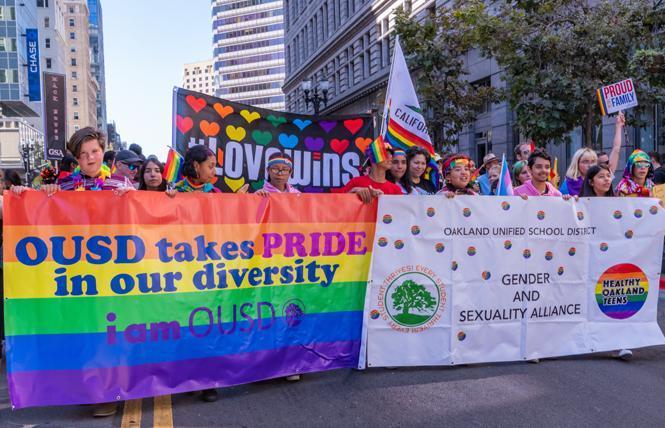 The Oakland Unified School District and its Gender and Sexuality Alliance were one of many contingents in the 2019 Oakland Pride parade. Photo: Jane Philomen Cleland

After last year's implosion of Oakland Pride's annual celebration, a new group is organizing a festival for the East Bay city this fall.

Dubbed PrideFest 2022, community members from several LGBTQ businesses and organizations have begun planning for the September 11 event, which will not include a parade. COVID-19 had dogged Oakland Pride's efforts over the past couple of years, forcing the group to move the celebration to a virtual event in 2020 then canceling again in 2021 just two weeks before its scheduled date. (It had some virtual content last year.)

Now, PrideFest organizers are moving forward to bring an in-person street festival to The Town.

"We're just in the formation stages," said Sean Sullivan, a gay man who owns the Port Bar in downtown Oakland.

At this point, organizers haven't even finalized the location or whether they´ll be charging festival admission as Oakland Pride did, Sullivan said in a February 10 phone interview with the Bay Area Reporter.

"I did mention it in October to Olaywa Austin and she did not express interest," Sullivan said, referring to the founder and CEO of Oakland Black Pride.

Mirroring planned PrideFest activities that weekend will be events organized by Oakland Black Pride, Austin said in a phone interview.

Austin said the group will have events throughout Oakland's three-day Pride weekend, with quite a few activities focused in the city's new Brooklyn Basin neighborhood just south of Jack London Square along Interstate 880.

"We don't want it to always be in the same place," she said. "We're excited about what we have in store for y'all."

Sullivan did not provide any budget figures, either for the PrideFest organization or the planned event. A team of diverse LGBTQ East Bay leaders is spearheading the effort.

According to a news release, in addition to Sullivan they include Michael Barajas from Gilead Sciences; Valentino Carrillo from Que Rico; Richard Fuentes, who is Sullivan's partner, form BART; Christie James of Pride Radio/iHeartMedia; Nenna Joiner, owner of Feelmore Adult; Joe Hawkins, executive director of the Oakland LGBTQ Community Center; Janelle Luster of TransVision; and Val Klein of iHeartMedia.

Some of the organizers have worked with Oakland Pride in the past. Hawkins is a co-founder and past board member, while James managed the women's stage from 2017-2020, the release stated.

"We want to lead this effort with love for our community and make the celebration one we are truly proud of, where we have accountability and transparency around the expenses and can raise funds for our LGBTQ organizations," stated James, who managed the stage at last year's PrideFest.

The release stated that the Oakland LGBTQ center would be PrideFest's fiscal sponsor.

"Accountability and transparency are being written into the creation of this organization and its bylaws," Hawkins stated. "Our goal is to make PrideFest Oakland an organization that will produce an incredible and inclusive pride celebration, that also raises funds for LGBTQ nonprofit organizations that provide critically needed services for our community."

Sullivan said that the group did not contact Carlos Uribe, Oakland Pride's co-chair. Uribe did not respond to a message seeking comment.

Last year, as the B.A.R. reported, emails detailed problems with Oakland Pride, as officials there tried to persuade the Oakland LGBTQ center to take over the event. The emails sent to the B.A.R. indicated Oakland Pride had a debt of about $125,000. Hawkins responded to Oakland Pride's email that the center was asked in July, just a couple of months before the September festival.

"However, from a nonprofit management and legal perspective, it is not a simple or quick process," Hawkins wrote in one of the emails. "Per nonprofit law, we would not be able to legally take over Oakland Pride ASAP!

Now, it appears that rather than take over an existing organization, PrideFest has formed to produce its own festival.

"In response to your reporting, we decided to step into the void," Sullivan told the B.A.R.

Location not set
Sullivan is not sure where the Pride festival will be located but would like it to be in the downtown area near where the Oakland Pride events would take place, around the intersection of 20th Street and Broadway.

"We want to be in the heart and soul ... of downtown Oakland," Sullivan said, adding they want to try and stay within the footprint of the celebration held in 2019 in the city's Uptown neighborhood. Toward that end, he and fellow organizers are working closely with the city and AC Transit to determine the best location. The bus system typically altered routes of some bus lines for the Oakland Pride festival.

¨The mayor has always been a big supporter of Oakland Pride," said Jonathan Bair, a gay man and assistant to Schaaf, who added in a phone call that the mayor is looking forward to a resumption of the Pride festivities.

Sullivan said the new Pride group has not talked with lesbian at-large City Councilmember Rebecca Kaplan about its plans. Currently serving as vice mayor and expected to run for an Alameda County supervisor seat this year, Kaplan did not respond to a text message seeking comment.

PrideFest must also make plans for the same issues that befell Oakland Pride, particularly around the COVID-19 pandemic.

"The main thing is to make sure we're disaster planning," said Joiner, a Black lesbian who owns Feelmore, a sex shop in downtown Oakland not far from where the Pride festivities had taken place. "What happens if another variant happens?"

Key to this effort, however, is that organizers are already looking beyond just this first celebration. Organizers are treating this effort "as if this has never been done before," Joiner said. Besides organizing September's event, volunteers "want to build a strong foundation" that will carry this celebration on into future years, she added.

The core of those efforts, Joiner added, is fundraising. "Is the corporate appetite there?" she asked.

With so many LGBTQ people working from home over the past couple of years, corporate LGBTQ culture has changed, she said. Expectations, too, have changed, with people perhaps not yet ready for the sweaty celebrations typical of those prior to the pandemic. They may be looking for something different.

"It's about mirroring the commonplace in people's lives," Joiner said.

Sullivan said that PrideFest is looking for more people to get involved.

"I acknowledge the bars leading the effort and accountability is more than just bars," he said. "We are open to more people getting involved to represent the broadest spectrum of the queer community in Oakland."