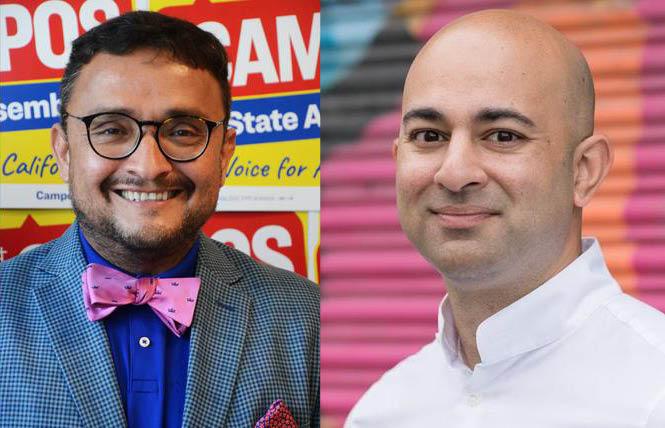 As efforts to track LGBTQ demographic data continue to increase at all levels of government, two of the candidates seeking San Francisco's vacant 17th Assembly District seat support collecting sexual orientation and gender identity information among California's state employees. Such SOGI data is already collected among the state's judiciary, and San Francisco is set to follow suit this year in finding out how many LGBTQ people the city employs.

In response to a question from the Bay Area Reporter if they felt SOGI data among the state's workforce should be collected, gay former District 9 supervisor David Campos and former Obama administration staffer Bilal Mahmood were unequivocal in answering yes. They both said they would support legislation requiring the collection of such information should they be elected to serve in the state Legislature.

District 6 Supervisor Matt Haney and City College of San Francisco Trustee Thea Selby didn't directly answer the question on if the state should know the LGBTQ makeup of its workforce. But both did express to the B.A.R. their support for asking about SOGI data and improving its collection in the state settings where it is already mandated to be gathered.

The quartet is running in Tuesday's special election to represent the city's eastside Assembly district, which includes the LGBTQ enclaves of the Castro, Tenderloin, and South of Market. If no candidate secures more than 50% of the vote then the top two voter-getters will advance to the April 19 runoff election.

The winner will succeed fellow Democrat David Chiu, who resigned in November to become San Francisco's first Asian American city attorney. The new assemblymember will serve out Chiu's term through December and needs to run for a full two-year term first on the June 7 primary ballot then in the November 8 general election.

SOGI data collection efforts underway
At the state level, a number of California departments and agencies focused on health care and social services since 2018 have been directed to collect SOGI data of the people making use of their public programs due to legislation enacted by state lawmakers. San Francisco and other local municipalities across the state have also enacted such policies for their own public agencies and departments.

Last fall, the San Francisco Board of Supervisors directed the city's Department of Human Resources to figure out how to begin collecting SOGI data not only of the city's workforce but also among those applying for jobs. Haney had joined with his 10 colleagues in unanimously voting to do so, which was prompted by an ordinance submitted by Mayor London Breed and gay District 8 Supervisor Rafael Mandelman.

Asked about replicating the policy at the state level, Campos told the B.A.R. he supports collecting SOGI data among the state's workforce.

"We need to require that SOGI data is collected across the state by all government agencies," said Campos. "Collecting this data is the only way that we'll know for sure that we're protecting the interests of the LGBTQ community and addressing both their concerns and key needs."

Mahmood was in agreement, telling the B.A.R. that he also supports "expanding the mandated collection of SOGI data to encompass employment and workforce data, and anywhere else the state collects data on individuals, unless there are well-documented negative impacts that outweigh the many benefits of collecting SOGI data."

Noting that an individual's "SOGI data is very sensitive personal information," Mahmood added, "We must ensure that systems and protocols are in place to protect the privacy and safety of individuals and their data, and provide funding for technical assistance to organizations that are in the process of adopting such systems and protocols."

Problems with the collection of SOGI data among users of government services became widely apparent at the start of the COVID-19 pandemic in 2020. There was no data being collected on the number of LGBTQ people contracting the coronavirus or dying from it, as the B.A.R. extensively reported on at the time.

Nor has there been reliable government data on the number of LGBTQ people who received vaccinations or booster shots. As the B.A.R. has covered over the last two years, the omission of SOGI questions in the software used to track demographics and problems in submitting what information is collected to state health agencies have presented roadblocks to resolving the issue.

Health officials at the local, state, and federal levels have pledged to fix the problems, with some progress being made. But, to this day, the true impact of COVID on the country's LGBTQ community remains unknown, with health leaders also in the dark on myriad diseases, socioeconomic issues, and other hardships LGBTQ Americans face.

Mahmood applauded state lawmakers for enacting legislation authored by gay state Senator Scott Wiener (D-San Francisco) that tried to address the lack of COVID SOGI data. But he also told the B.A.R. more needs to be done to resolve the issue.

Implementation of Wiener's Senate Bill 932 "has not happened at the pace and quality that is needed," contended Mahmood, noting that in early 2021, "it came to light that the state was not collecting SOGI data on vaccinations. We must push for the law to be implemented robustly, while also working to expand to other domains."

He added, "On the public health front, it should be expanded to encompass non-communicable diseases. For example, heart disease eclipses COVID-19 as the leading cause of death across the United States in 2021."

Haney also noted the various problems that have plagued the SOGI data collection efforts in the state. He told the B.A.R. that local and state departments need funding and technology support to ensure they can share and compare the LGBTQ information.

"Collecting SOGI data helps us understand the extent of inequities faced by LGBTQ+ in social services," said Haney. "Having robust SOGI data available allows us to see where our services are being delivered inequitably and where we need to make changes."

State leaders need to "work hand-in-hand with LGBTQ+ advocates and stakeholders to craft questions and language that allows us to best serve these communities, and then to provide adequate training to those collecting this information," added Haney, especially those working with non-English speakers.

With the ongoing pandemic bedeviling efforts to collect SOGI information in-person, Haney said there is still work to do "to ensure that all agencies have the resources and training to roll out SOGI data efforts in virtual or over-the-phone settings. As a member of the state Assembly, I am committed to finding solutions to these and other problems related to SOGI data collection."

As for Shelby, she told the B.A.R. she believes the city's community college is also asking about SOGI data. When she took the campus course "Introduction to Masculinity," Selby noted her fellow classmates had a variety of identities and orientations.

"This is a part of life as we know it now and we should collect the data around it," said Selby.

She also told the B.A.R. the state must adequately fund the SOGI legislative proposals already enacted and conduct outreach to ensure they are implemented.

"I would see what legislation currently exists for SOGI data, and look for ways to fund outreach about it, streamline the process if that is the issue, and make sure that everyone knows why we are doing this," said Selby. "Education is the key in many cases to making change."

Due to Presidents Day the Political Notes column will return Monday, February 28.