Out in the Bay: Fauxnique pens 'Faux Queen: A Life in Drag' 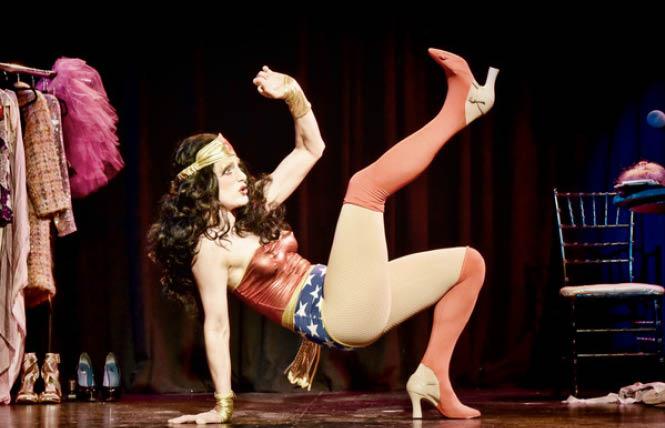 Fauxnique portrays Wonder Woman, one of many characters in her show "The F Word" at Oasis cabaret, San Francisco, 2016. Photo: Gooch

Monique Jenkinson, aka Fauxnique, was the first cisgender woman to win the Miss Trannyshack title in 2003, raising many glittered eyebrows in consternation and launching a performance career that has taken her around the globe. In a kiki of sorts with Out in the Bay, she shares live performance clips from her show "The F Word;" reads from her memoir, "Faux Queen: A Life in Drag;" and spills tea about where drag and feminism meet and about words that are "now Problematic with a capital P. Or rather, a capital T."

In "Faux Queen," which she calls "a collection of essays in drag as a memoir," Jenkinson invites readers into "the 'shack," the club she'd been invited to by gay men and that was central to the extraordinary, edgy San Francisco drag scene of the late 1990s and early 2000s.

Trannyshack, the late-night performance club that ran weekly in San Francisco from 1996-2008 with an annual pageant and later happened occasionally here and in other cities, profoundly influenced drag globally. Deferring to transgender community concerns, founder Heklina changed the name to T-Shack in 2014, then to Mother in 2015.

"I'm not a transwoman and it's not my purview to change the language or to say who can use this word," Jenkinson told Out in the Bay - Queer Radio & Podcast, "but in the moment [tranny] was a cute nickname that drag queens and trans women had for each other" and was used "loosely and very lovingly."

The club transformed Jenkinson, who'd trained in classical ballet as a youngster, into Fauxnique: "Being invited into this weekly kind of down-and-dirty, loose, but very frequent and regular practice was, as they say, a game-changer."

Since her 2003 pageant win, Jenkinson, performing as Fauxnique, has created more than a dozen solo shows that combine dance, spoken word, and extravagant drag, including "Faux Real," "The F Word" — clips of which we hear on Out in the Bay — and "C*NT, Or The Horror of Nothing to See."

She acknowledges that anger fueled some of her recent work. Especially when creating "C*NT," she said, "I was deep in my feminist rage." Yet through it all, she says it's important to keep your sense of humor "and use it."

"All the gay men in my life have taught me that. They survived a plague through humor," said Jenkinson, referring to the AIDS epidemic. "That's one of the big lessons of this book ... how humor helps us through."

A book launch party for "Faux Queen: A Life in Drag," will be held from 6 to 9 p.m. Saturday, February 19, at Oasis nightclub in San Francisco.

Eric Jansen is founding host and managing producer of Out in the Bay - Queer Radio from San Francisco. Learn more and listen at https://www.outinthebay.org/