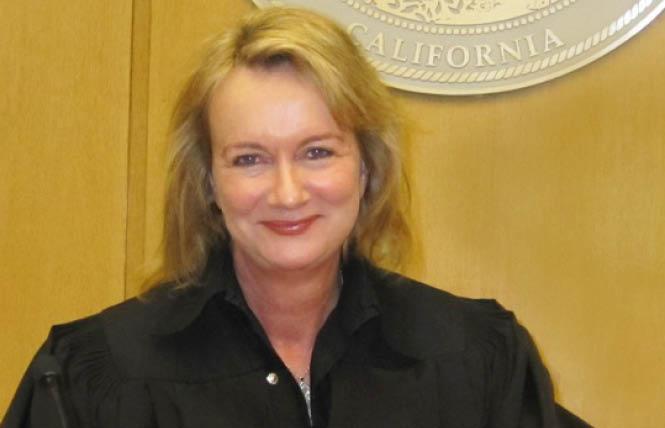 Having served 11 years on the San Francisco Superior Court, Judge Angela Bradstreet has decided to retire. One of three lesbians serving on the lower court, Bradstreet has been a vocal advocate for increasing the number of women and LGBTQ professionals in the legal system.

Her retirement will be effective February 18. It means Governor Gavin Newsom will name her replacement.

"This governor has been wonderful in making diverse appointments. It would be really wonderful if another woman and another lesbian was appointed to fill my seat who is qualified," said Bradstreet, 66, a Democrat appointed to the bench by former Republican governor Arnold Schwarzenegger.

She had served in private practice for 25 years and spent three years as California labor commissioner before becoming a judge.

"I saw public service as a chance to give back for all the great things this country has given me," she stated in the February 8 announcement about her retirement. "Being a judge on one of the most diverse trial courts in the nation has been a privilege and a hugely rewarding experience which will always remain in my heart."

Having lost her father at the age of 66, as well as other friends in her life at a similar age, Bradstreet told the Bay Area Reporter she felt the timing was right for her to retire from the bench. She does plan to continue to work, but due to judicial ethics rules, Bradstreet is forbidden from disclosing her plans until her retirement is official.

"I just felt it was time. It is not like I am hanging it up; I am going to be doing other things and have other plans," said Bradstreet. "I just thought, 'Hey, it's going to be 15 years in public service and 25 years as an attorney, so 40 years is probably time to go into something else.'"

Being a judge, added Bradstreet, "is a wonderful, wonderful job, and it's great being in the trenches as a trial judge. It has given me so much; it has just been a great, great honor."

She and her wife plan to travel, including to Australia having postponed a planned trip there due to COVID. They will also be headed back to Great Britain in August for a niece's wedding.

Bradstreet grew up in London and had practiced law there as a solicitor. But she moved to the Bay Area at the age of 24, escaping the harsh treatment she received from her mother due to her sexual orientation. Bradstreet fell in love with the region and decided to make it her new home; she is a longtime Sausalito resident.

Last June, for Pride Month, Bradstreet talked publicly for the first time in an interview with the Bay Area Reporter about her mother's cruel reaction in discovering her daughter in bed with her girlfriend at the time.

"What ensued was a terrible scene," recalled Bradstreet. "My mother basically said 'if you ever do that again, I'll kill myself.'"

Following nearly a year of intensive therapy, Bradstreet made the decision to leave her home country to get away from her parents. She applied and was accepted for a master's program at Berkeley Law, leading her to jump the pond for the U.S.

"Two months later I was on a plane with my backpack and $1,000," recalled Bradstreet, now married to Cherie Larson, a vice president of human resources in the ed-tech field.

After earning her master's degree Bradstreet clerked for a year in San Mateo County Superior Court. In 1981, she joined the law firm that was then Carroll Burdick and McDonough. (Long after Bradstreet left, the firm merged with Squire Patton Boggs.) She worked there for 25 years, becoming not only the firm's first woman managing partner but also the first LGBTQ managing partner in the Bay Area. She litigated civil cases until being tapped by Schwarzenegger in 2007 for the statewide labor position.

During her tenure as president of the Bar Association of San Francisco, Bradstreet led the fight to have California judges be barred from joining the Boy Scouts of America because of their anti-gay policies. In 2002, Bradstreet was instrumental in convincing the San Francisco Superior Court to cut its ties with the youth group. A year later her efforts led to new rules being adopted statewide calling for judges who belonged to the scouting group to recuse themselves from hearing gay rights cases.

She was also a member of the legal group's Marriage Fairness Task Force, which worked within the legal profession to convince lawyers why they should oppose the 2008 ballot measure banning marriage equality for same-sex couples known as Proposition 8.

It narrowly passed that November, but the U.S. Supreme Court upheld in 2013 a lower court ruling overturning Prop 8. A year later Bradstreet and Larson were married at the San Francisco home of Senator Dianne Feinstein (D-California), who officiated their ceremony.

"Not only has Judge Bradstreet been a trailblazer throughout her varied and remarkable career, she's also been a trusted mentor and inspiration to countless women lawyers and judges who have benefitted from her sage advice and friendship,'' stated Justice Tracie L. Brown of the First District Court of Appeal, who served with Bradstreet on the San Francisco court. "Judge Bradstreet is a universally respected trial judge who can deftly handle any type of case — from employment class actions to mass torts."

Brown thanked Bradstreet for the mentoring she provided women and others who joined her on the local bench.

"The judicial gods were looking down on me when I was lucky enough to be placed in the office next to Judge Bradstreet when I first came to the court," noted Brown. "She was so encouraging and giving of her time when I had questions. She's a role model for all of us.''

Since 2016, Bradstreet has presided over civil trials and settlements, taking a lead in the superior court's highly successful judicial settlements program. In addition to presiding over every type of civil trial, she has successfully settled/mediated hundreds of cases ranging from one of the largest ever wage and hour class actions, to complex commercial, personal injury, products liability and sexual harassment and discrimination cases, as noted by the court in its announcement of her retirement.

It provided her another opportunity to make the bench more diverse and transparent, stated Judge Joseph M. Quinn, a gay man who was one of the seven known out gay or lesbian judges on the San Francisco bench as of the end of 2020. (The data for 2021 will be released in early March.)

"She has taken care to create opportunities for those coming up behind her, especially for women and LGBTQ folks," stated Quinn. "We benefitted from her work and leadership. And many — including myself — owe her a great debt of gratitude."

According to the superior court, Bradstreet's ability to settle cases resulted in a savings of more than seven years of trial time.

"Her ability to settle difficult cases is extraordinary," stated Samuel K. Feng, presiding judge of the San Francisco Superior Court. "Judge Bradstreet has settled many of the largest and most complex, emotional cases at the court, which has been of enormous benefit to the court and to the litigants during this unprecedented time. We will miss her greatly.''


Updated, 2/8/22: This article has been updated with comments from Judge Bradstreet.