SFAF restores services after being hit by supply-chain issues 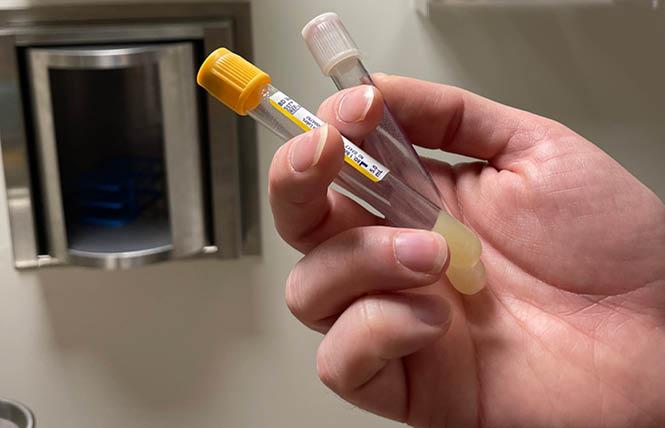 The San Francisco AIDS Foundation runs one of the largest community-based HIV service programs in the country, but last month, it began canceling some services and rationing testing for sexually-transmitted infections due to supply shortages at its Strut health center in the Castro.

The rollback came amid a suspected rise in San Francisco's STI cases, but as of this week SFAF began to resume normal services.

"We were never in a situation of crisis until the beginning of this year," said Jorge Roman, director of clinical services and a nurse practitioner with SFAF.

Typically, SFAF sees roughly 85 patients a day and provides routine STI testing for each person because many infections like HIV, chlamydia, and syphilis can present as asymptomatic. If a patient is on PrEP, a once-a-day pill that prevents HIV, they are required to undergo testing every three months. Without the right testing tubes, SFAF was forced to scale back its syphilis testing in mid-January and postpone non-urgent medical appointments.

Days after the decision to reduce syphilis testing, SFAF discovered that the tubes used for HIV testing were growing scarce too.

"For a minute, even a couple of hours one day, when we finally found out a strategy that would allow us to go back to clinical operations, we were like, 'Oh, shit, do we even have enough needles?'" said Roman. "We thought we weren't even going to be able to draw blood."

That needle shortage never arose, but SFAF has officially altered its HIV testing methods to keep up with supply-chain issues around tubes. Last summer, the federal Food and Drug Administration notified health care providers about a shortage of one particular brand of tube that was used to treat patients with COVID-19-related complications.

In response, the FDA issued an emergency use authorization to manufacturer Becton Dickinson, which enabled the company to acquire and sell tubes from Europe that had not yet received full U.S. authorization. On January 19, the FDA amended this notice to reflect a shortage of "all blood specimen collection tubes."

"From a sexual health standpoint, this is huge," said Kathleen Jeanty, director of communications and special initiatives at the National Coalition of STD Directors. "A lot of the testing that we do is blood-based testing."

The FDA has issued guidelines instructing health care providers to conserve these tubes whenever possible. Recommendations from the FDA include reducing routine tests, extending wait times between tests, and finding alternatives to blood tests.

"It doesn't make sense that sexual health clinics and providers have to ration supplies or make a decision about which individuals warrant testing," said Jeanty.

The National Coalition of STD Directors is calling for action that would increase supply, like another emergency use authorization similar to the one issued last summer. When shortages occur, resources are funneled to larger hospital systems, and national, high-volume health care organizations.

SFAF runs its laboratories in-house and independently procures its medical supplies, making it more susceptible to these shortages. Even so, SFAF is relatively lucky, Roman said.

"It's going to affect smaller organizations than us, places that are already suffering from access ... places where they have testing one day a week," he said.

Companies like Nurx, which coordinates at-home STI testing and PrEP delivery, rely on different technology for STI and HIV tests and have likewise avoided the shortage. Instead of tubes to draw blood, Nurx uses dry blood spot cards that individuals can self-administer.

"In fact, our numbers have gone up because people don't want to go to a clinic. They want to do this at home," said Emily Rymland, a clinical development manager at Nurx who has a doctor of nursing practice degree.

She acknowledged that the company still experienced some delays during the COVID pandemic with other medical supplies, like its urine testing tubes.

Meanwhile, SFAF has already restarted syphilis testing and found alternative strategies that enable it to resume normal clinical operations as of February 8. The new HIV testing process will offer the same level of accuracy but should be able to avoid shortages for at least the next three months.

DPH has yet to disclose the most recent STI reports for the city, but Roman can already guess one outcome.

"I can guarantee you that there were cases that we missed directly related to this," he said.

For an appointment, call 415-581-1600 (press 1), make an appointment online, or drop in at 470 Castro Street for Magnet Express STI testing (limited availability). For information, click here.

As COVID pandemic eases, STD epidemic on the rise
Sign up!