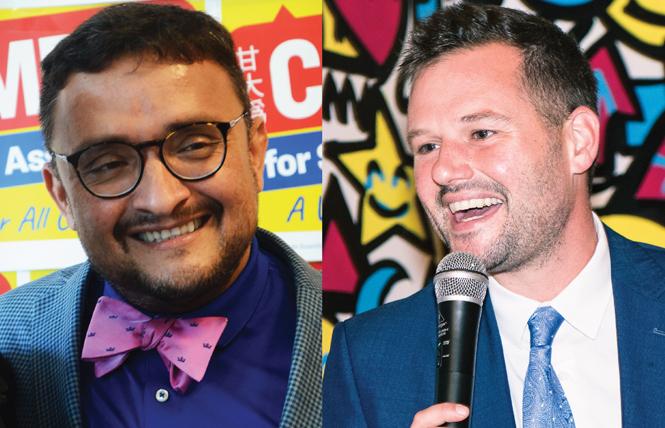 No matter who is elected to San Francisco's 17th Assembly District seat, they will work to ban the use of conversion therapy on adults and end unnecessary surgeries on intersex children should the two controversial legislative proposals be revived again in the state Legislature.

They are among the LGBTQ priorities backed by the quartet of candidates running in the special February 15 election for the vacant Assembly seat. The four, three of whom are straight, aim to succeed fellow Democrat David Chiu, who resigned in November when he became San Francisco's first Asian American city attorney.

Gay former District 9 supervisor David Campos and District 6 Supervisor Matt Haney are seen as the two most likely to advance to the April 19 runoff election. No candidate is expected to secure the 50%-plus-one vote needed to win the seat outright next week.

But former Obama administration staffer Bilal Mahmood has flooded the screens of television viewers for weeks with campaign spots, raising his visibility among voters, and was endorsed this month by the San Francisco Chronicle. The more memorable spot features him as a young boy dressed like Superman.

Haney, endorsed by the San Francisco Examiner, and his union backers have also paid for TV ads. Financially unmatched, partly due to his self-imposed restrictions on the contributions he will accept, Campos, endorsed by the Bay Area Reporter, has in recent weeks been able to afford pop-up ads online.

Meanwhile, City College of San Francisco Trustee Thea Selby has made the most of the numerous candidate forums myriad groups have held in order to pitch herself to voters. She would be the first female state lawmaker from San Francisco in a decade.

Mahmood would be the first person of Muslim identity and Pakistani American identity to serve in the California Legislature. Campos would be the city's first Latino legislator and return LGBTQ representation from San Francisco to the Legislature's lower chamber.

The B.A.R. asked all four what sorts of LGBTQ legislation they would either author or support if sent to Sacramento as the representative for San Francisco's eastern neighborhoods, including the LGBTQ districts of the Castro, Tenderloin, and South of Market. Specifically, they were asked about banning the homophobic and unfounded practice of trying to convert LGBTQ adults into heterosexuals.

Gay Assemblymember Evan Low (D-Campbell) has been trying to advance such a ban for years, following the passage of his bill that forbade the practice being used on youth under 18. Due to opposition from evangelical religious leaders, Low shelved the legislation aimed at adults in 2019 and has not pursued it since.

"Conversion therapy is a pseudoscientific practice that rests on the premise that being gay is a disorder that can be cured," Campos told the B.A.R. "Conversion therapy is not just harmful for the healthy development of children but it also provokes guilt, anxiety, and rejection in adults. I strongly believe that we must have the political will to protect LGBTQ Californians from this insidious practice at the state level, even in the face of opposition from right wing special interest groups."

Haney called it "an extremely harmful and barbaric practice" and pledged to "stand firmly against any effort to alter an individual's sexual or gender orientation. Further than a ban, we need laws criminalizing these practices which focus on punishment for practitioners and addressing the harm inflicted upon those subjected to such 'therapies.'"

Selby also told the B.A.R. she would support banning the practice, as did Mahmood, who called it "queerphobic and transphobic" as well as "pseudoscience."

"It has been proven to be very harmful, leading to 3-8x increases in the likelihood of attempted suicide, rates of depression, rates of substance use, and STI rates among people subjected to 'treatment,'" he noted. "Every major medical and mental health organization in the United States has condemned the use of conversion therapy. We must extend the protections we have enacted for youth to also protect adults."

Support for intersex children's autonomy
Another controversial legislative push has been gay state Senator Scott Wiener's (D-San Francisco) effort to give intersex children a say in the medical procedures performed on their genitals. Since 2019, he has tried to pass a bill postponing elective surgery on intersex children until they are 12 years of age and can take part in making such a medical decision.

But it has faced fierce resistance from medical lobbying groups, and in January, Wiener again abandoned the effort. It could be brought back next year following this November's election results in Senate and Assembly races across the state.

If he does, he will have the support of his new legislative colleague in the Assembly from San Francisco. All four of the candidates would back such a bill; Mahmood listed his doing so at the launch of his campaign last fall. More recently, he told the B.A.R. he would introduce his own legislation similar to the one Wiener authored.

"I recognize that intersex people suffer tremendous harm and trauma from these invasive, cis-sexist procedures that violate their bodily autonomy," he told the B.A.R. "I support the work of intersex-led organizations on this issue, including the Intersex Justice Project."

Selby also said she would co-sponsor such a bill, as did Haney.

"Intersex surgeries, most of which are done on children under two years old who are unable to consent, can create life-long harm leading to physical and psychological trauma," noted Haney. "Parents can be pressured to opt for surgery, and a ban on these medically unnecessary and harmful surgeries is absolutely necessary."

Campos also told the B.A.R. that medical professionals should not be violating the bodily autonomy of intersex children.

He noted that "such medical surgeries can cause long term psychological harm to children and goes against the scientific understanding that sex is a spectrum, invoking fear & shame in intersex children. Intersex children should be able to make the decision to have surgery when they are old enough decide for themselves." 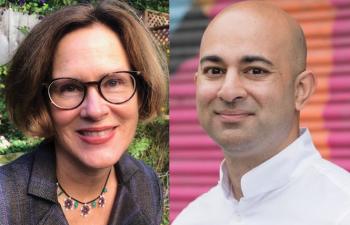 Other LGBTQ concerns
As the B.A.R. noted in its endorsement last month of Campos, he wants to replicate Santa Clara County's Office of LGBTQ Affairs in all 58 of the state's counties. As a deputy county administrator for several years, Campos had purview over the office, the first of its kind in the Golden State.

He also would work on establishing gender clinics throughout the state like the one the South Bay jurisdiction opened to meet the health needs of its transgender residents. As the B.A.R. has previously reported, access to gender-affirming care is limited for many trans, gender-nonconforming and intersex Californians, particularly in more rural counties or those away from coastal urban centers.

Pointing to his work last year as the supervisors' budget chair, Haney told the B.A.R. he would replicate his focus on ensuring LGBTQ needs are funded at the state level. He wants to expand rental subsidies for the trans community, increase funding for health care services for queer and trans individuals, and invest in professional development for medical professionals so they can support their LGBTQ+ patients.

"I will work closely with LGBTQ+ advocacy organizations, I will sponsor bills that advance the rights of LGBTQ+ people and I will always fight to make sure that LGBTQ+ people and other marginalized communities have a seat at the table," said Haney, who's de facto chief of staff at City Hall is longtime trans rights advocate Honey Mahogany. "This is something that I have done in every role I have had, and I will take that responsibility with the highest level of commitment as an assemblymember."

A former school board member, Haney said the needs of LGBTQ+ youth would also be a top priority due to their experiencing higher rates of depression, anxiety, and suicidal ideation stemming from isolation, bullying, and rejection. He wants to boost investments in mental health services for LGBTQ+ students and ensure educators are implementing the lessons they learn from their training on how to support LGBTQ+ students.

"Although state law requires that school personnel intervene in acts of discrimination, harassment, intimidation, or bullying, we know that intervention can actually be rare in practice," noted Haney. "We need to work with educators at the state level to ensure that intervention is prioritized. We should emphasize peer-led programs, similar to the San Francisco's Peer Resources organization, that provide peer education on LGBTQ+ awareness, and support students in creating cultural/art/awareness programs that focus on respecting and valuing every human being."

Mahmood noted that a key component of his platform is civil rights reform for LGBTQ+ people. He, too, would call for increased access to transition-related support and gender-affirming services for transgender youth and adults.

"Accessing transition-related support is still too difficult for transgender people of all ages and socioeconomic statuses, and even more so for those who are multiply marginalized," he told the B.A.R. "LGBTQ+ people are underserved in access to healthcare for many reasons, including a shortage of queer & trans-competent healthcare providers, and because some healthcare providers refuse to treat minors without parental consent."

He also expressed support for Assembly Bill 1041 authored by Assemblymember Buffy Wicks (D-Oakland), which would expand the definition of "family member" for purposes of family and sick leave so employees can take time off to care for their "chosen family." It takes into account that many LGBTQ people don't have a spouse or children but do have close friends they consider to be akin to blood relatives.

Wicks' bill passed out of the Assembly last year. It will be taken up by the state Senate this year.

"As a straight and cisgendered ally, I have worked to educate myself on issues affecting the LGBTQ+ community, and center the voices of LGBTQ+ friends and colleagues in forming my positions and advocating for equity," Mahmood told the B.A.R. "LGBTQ+ people should have the same rights and opportunities as all Californians, but our government and systems remain antiquated and often explicitly prejudicial, causing great harm."

Should she be elected to the Assembly, Selby told the B.A.R. that she would create an LGBTQ Advisory Board whose members could advise her on their "real-life experiences living, working, and loving in San Francisco." One priority for her would be housing for transitional aged youth and those living on the streets, 40% of whom in San Francisco are LGBTQ youth, Selby noted.