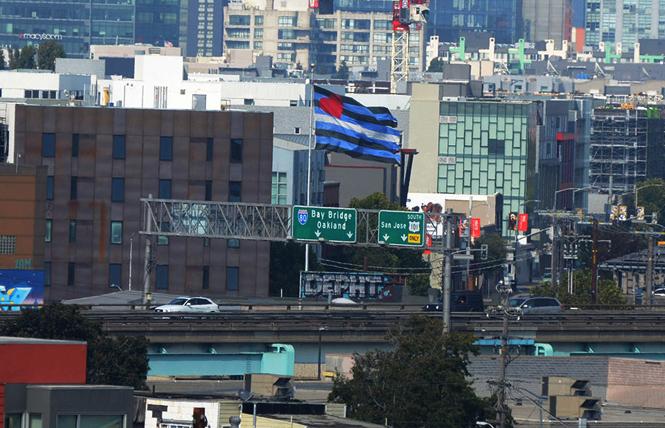 The Leather & LGBTQ Cultural District will hold its first second Saturdays of the year February 12 in the South of Market neighborhood. Photo: Rick Gerharter

The Leather & LGBTQ Cultural District and other South of Market groups have announced the return of the popular SOMA Second Saturdays starting February 12, from noon to 5 p.m.

Joining the leather district is Folsom Street (formerly Folsom Street Events) and the SOMA West Community Benefit District. The three groups started the second Saturdays events last year as a way to bring people together amid the COVID-19 pandemic and to help boost local businesses.

The upcoming event, taking place the day before the Super Bowl, has a "Game Day" theme — an afternoon of indoor games with a kinky twist, according to a news release. Snacks and non-alcoholic beverages will be provided.

Potential games include kinky Pictionary, Taboo, SOMA trivia, UNO dare, Cards Against ..., and others. The event will be held at the Folsom Street Community Center, 145 Ninth Street, between Mission and Howard streets.

Current COVID protocols will be enforced, according to organizers. Attendees should bring proof of vaccination and wear a mask when not actively eating or drinking.

Cal Callahan, manager for the Leather & LGBTQ Cultural District, stated that after the successful indoor holiday event in December, the community was eager for another indoor winter event.

Game Day will be followed by Movie Day March 12 then the plan is for the second Saturdays event to return to a street fair format on April 9, providing a welcoming, festive space for the leather and kink communities, the release stated.

According to a news release, approved applicants qualify for a monthly housing payment equal to 30% of their gross household income, pay no down payment, and have a 0% interest mortgage.

Applicants must be willing and able to complete 500 hours of sweat equity, must not have owned a residential property in the last three years, and meet certain income ranges, the release stated.

Before applying, applicants must attend a virtual information session. Applications will be available beginning Tuesday, February 22. The deadline to apply is Friday, April 22.

It's official: Valencia signs Gay Games agreement
The Federation of Gay Games has announced that Valencia, Spain, which last year was named the presumptive host for Gay Games XII in 2026, is now officially staging the athletic event after organizers signed the license agreement.

"The Federation of Gay Games is thankful to the Valencia organizers for their successful bid efforts, and we are extremely excited for our first opportunity to promote the Gay Games in Spain," Sean Fitzgerald, FGG co-president, stated in a news release.

Gay Games XI is scheduled for Hong Kong in 2023. It was originally to be held this year, however, organizers last September decided to postpone the event for a year. This was due to the global COVID-19 pandemic, as the Bay Area Reporter previously reported.