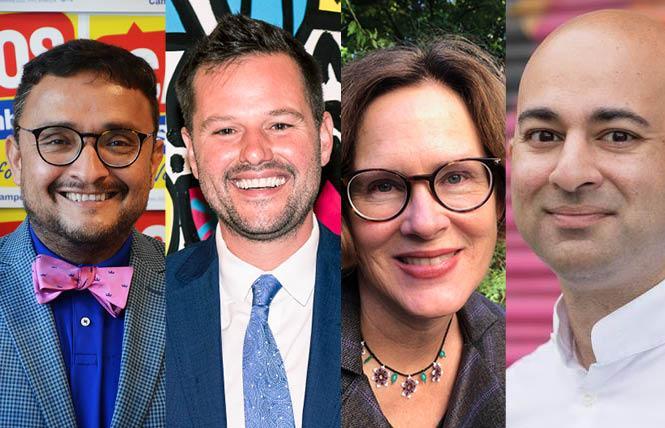 In one of the final forums before the February 15 special primary election, the candidates running for the Assembly District 17 seat talked about how they would address the needs of small businesses.

The mood of the virtual forum was light and friendly. There were no opening statements from the candidates. Instead, Yekutiel went right to questions, addressing each candidate one at a time. The first question asked what the candidates felt were the two most pressing issues facing small businesses.

"Foot traffic," Selby said. "We need to get our people back on the streets and into stores, into cafes, into restaurants, safely of course."

Selby added that she would like to see people ditch Amazon.com and support small businesses.

Campos said that he thinks everyone has been "hit pretty hard by the pandemic."

"I think small businesses especially, and the first thing I would say is just being able to stay open and afloat," Campos said. "That requires more help from the state and federal government. We need to do something else at the state level to support, financially, our small businesses."

Mahmood recalled asking businesses what the top three issues they were worried about once the pandemic was over.

"Every single business mentioned the same three things," he said. "Access to capital, commercial rent debt, and supporting their workers. So we need to better support microlending services that I've seen work in the nonprofit sector. Second, over the pandemic so many businesses have accumulated rent debt. We need to do relief for rent debt to ensure that we get the businesses back on track."

"The first would be able to compete with online retail and maintain storefronts," Haney said. "We have so many regulations, so many taxes, so many barriers that go into being able to open and operate a retail business in San Francisco and California."

Haney pointed out that barriers, regulations, and fees need to be reduced. He also called for taxing Amazon, and for building more affordable housing so that workers can live closer to where their jobs are.

Yekutiel then asked the candidates what concrete things they had done over the past two years to support small businesses during the COVID-19 pandemic.

Mahmood said that he set up a foundation to support local businesses in the city.

"We found that workers were leaving San Francisco in droves, so what we did was set up a guaranteed income program for workers who did not qualify for [Paycheck Protection Program] loans," he said.

Selby pointed out that she, herself, is a small business owner.

"When the government tells you that you have to shut down, it is terrifying," she said. "I was super relieved when the PPP came about and what I found in Chinatown [was] 40% of the businesses were not able to apply for PPP. So I can only tell you that the level of anxiety for me went from here to here when I realized I could get, and it wasn't a lot of money, but it was enough money to keep my employees and to not have to lay off all of my employees and for me to continue my business for that short period of time. So I know there are a lot of people on this call who went through that same thing."

Selby also spoke of the importance of having multilingual services for small businesses.

Campos said that the pandemic illustrated the importance of prioritizing small businesses.

"We are only as strong as a society as those that have the least," he said. "And what defines the success of the economy is how the small businesses are doing."

Campos spoke of the legacy business program, which can be granted to San Francisco businesses that are at least 30 years old. Campos authored the legacy program during his tenure as supervisor.

"That really created a lifeline for so many small businesses in San Francisco," he said. "To the extent that there were surplus funds that the board had, those funds were used through that legacy business program to save those businesses."

Yekutiel then directed individual questions to each of the candidates. Mahmood was asked how small businesses could trust that he would watch out for their interests since he had not held elective office before. Mahmood recalled that when he was with the Office of Innovation and Entrepreneurship during the Obama administration, he had worked on small business legislation, trying to make it easier for small businesses to obtain Small Business Innovation Research grants.

Haney was asked what he had done to improve things in District 6, which includes the Tenderloin, where many have claimed that things have gotten worse with homelessness and open-air drug dealing. The Board of Supervisors and Mayor London Breed have worked over the last month to focus resources on the neighborhood, including approving an emergency declaration and opening a linkage center. Haney pointed out that he lives in the Tenderloin.

Yekutiel noted that Campos had fought as a supervisor to protect the city's Health Care Security Ordinance, aimed at providing insurance to employees through contributions paid by small businesses and customers. Yekutiel pointed out that a significant portion of the revenue sits untouched.

"What ideas do you have to help improve the program that you helped start?" Yekutiel asked.

"It is in the interest of small businesses to make sure that their workers have health care," Campos said. "Having a healthy worker is an essential part of having a successful business. As a consumer and a customer of many of these businesses I want to make sure that that's the case. If people have ideas about that then I'm certainly open to hearing them."

Campos also called for making Medicare for All and single-payer health care in California a reality. Last week, Assemblymember Ash Kalra (D-San Jose) pulled his bill that would have created a single-payer system in California. Kalra said it did not have the votes to move forward.

Selby was asked what she had done to prevent small businesses from closing as a co-creator of the Lower Haight Merchants and Neighborhood Association.

"I started it because there was a double homicide across the street from my house," she said. "The Council of District Merchants was able to give us a grant and we were able to then pass that money along to various merchants who are in need. We also strung lights along Haight Street on both sides of the street for about three blocks. We also created a really cool program in which volunteers would work with restaurants to get food to people free of charge."

Booze and cannabis
The candidates were then asked which topic they wanted to next talk about, liquor or cannabis. Campos chose cannabis, Haney chose liquor, Mahmood was given cannabis and Selby was given liquor.

Haney and Selby were asked what could be done about the fact that a liquor license costs a quarter of a million dollars, considering that many legacy bars depended on liquor licenses as their life's blood.

"We put too much of a burden on small businesses," said Haney. "We shouldn't make it so hard to operate businesses. Businesses that sell liquor, we should allow those businesses to stay open later. We have to make it easier for these businesses to sell liquor that allows it to be taken out, used outside. These barriers hurt small businesses, they hurt our ability to have art and culture, entertainment and performance in our cities. Of course we need to have appropriate regulations, but all of these barriers and bureaucracy just creates more and more cost and are not effective at all."

"We don't have pensions as small business owners," said Selby. "Most of us don't turn into big businesses, we basically provide for our families and our employees. So I think what we need to think of is governments, as a state, is how do we provide for small businesses and for our elders so that they can retire, so that they don't have to look at this as a pension at the end of the day but instead that they actually get pensions."

Campos and Mahmood were asked what they would do to make it easier to own and run a cannabis business, given the excessively high taxes these businesses must pay.

"I've always been a strong supporter of cannabis," said Campos. "Being an LGBTQ person has a lot to do with it. The cannabis community saved so many people during the AIDS crisis. We need to reform taxation when it comes to cannabis. The taxation system we have in place is punitive. It is driven by this idea that this business and this industry should not exist. I personally think that it is short-sighted. One of the things that I look forward to doing at the state level is what I did as a supervisor, work with the industry to figure out reforms to taxation that make sense, that will allow them to pay their fair share but doesn't punish them."

Campos added that he thinks it's important to find ways of providing more equity and having more access to that industry to communities of color and to women.

Mahmood agreed with Campos that taxes needed to be reformed. He also felt that it should be made easier for public banks to provide financial services to cannabis businesses.

The entire forum took about an hour. The forum has been archived and can be viewed at YouTube.