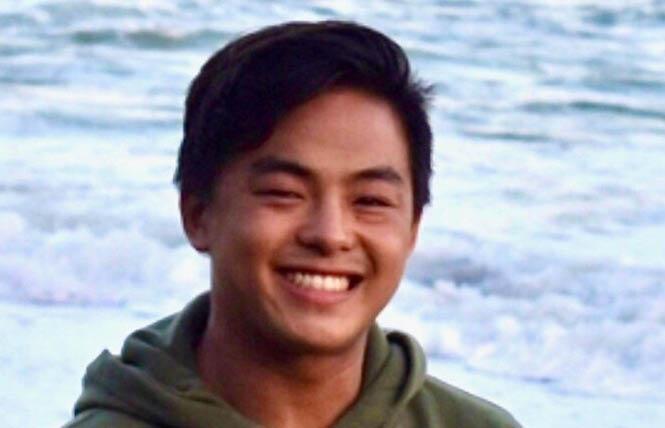 Following an article in the Bay Area Reporter this week, state Senator Scott Wiener has called on the San Francisco Police Department and medical examiner's office to more fully investigate the 2020 death of a 20-year-old gay man.

As the B.A.R. reported, Jaxon Sales died March 2, 2020 in a Rincon Hill apartment, according to a copy of the medical examiner's report. It lists the cause of death as acute mixed drug intoxication, including gamma-Hydroxybutyric acid, cocaine, and methamphetamine. The manner of death is listed as an accident.

The report also says Jaxon Sales, an Oakland resident, suffered from asthma, and the toxicology report shows he took ephedrine, an asthma medication, though this was not listed among the drugs to which his death was attributed.

In his letter, Wiener noted that one of the claims made by the couple is that a person in the medical examiner's office allegedly made an offensive statement when they told them "no investigation is needed as 'the gay community uses GHB,'" a statement they said is discriminatory. Wiener agreed.

"If this statement was indeed made, it is highly offensive, inappropriate, and dismissive of a drug overdose from a substance at times used as a date rape drug," Wiener wrote. "Additionally, the San Francisco Police Department reportedly chose not to investigate this death based on the [Office of the Chief Medical Examiner's] sole medical determination."

"We are so grateful for the senator's concern and the questions he raised to Police Chief Scott and the chief medical examiner, Dr. Liverman, in his letter," Angie Sales wrote in a text message to the B.A.R. "We hope that his concern, and that of many thousands around the world, about the lack of comprehensive investigation and the non-response to our questions about Jaxon's death will lead these agencies to do what is right so that there will be justice for Jaxon."

As previously reported, when reached by the B.A.R. David Serrano Sewell, the chief operating officer at the medical examiner's office, wouldn't confirm or deny "the gay community uses GHB" remark, but denied that Jaxon Sales' sexual orientation was a factor in determining the death was not a homicide.

Wiener's letter also states that he's unclear how SFPD could have reached any conclusion about the young man's death since officers didn't interview the people present at the home the evening before the incident. Wiener noted that Angie and Jim Sales apparently learned information about another overdose at the same address shortly before their son's death.

"When Jaxon's uncle picked up Jaxon's belongings at the SF OCME on March 3, 2020, the representative at the office told him about another overdose (non-fatal) at that male's apartment only one week prior to Jaxon's," the online petition states. "A recent prior overdose in that apartment raises a huge red flag. Why hasn't that overdose victim been questioned?"

Wiener wrote that if that's true, he found it "alarming" that police didn't take steps to determine whether the two cases may be related. He stressed, though, that he is not pre-judging whether a criminal act occurred.

"I am, however, asking you to ensure that a complete investigation occurs," he wrote.

The SFPD and medical examiner's office did not immediately respond to requests for comment.

Updated, 2/4/22: This article has been updated with a comment from Angie Sales.

GHB: The 'elixir' that no one is talking about (but everyone is drinking)
Sign up!